Hey, Baby Ike. So. This is awkward, but apparently the Internet is very, very interested in hearing about your diapers. Not in a creepy way! I don't think. Everybody just keeps asking about the cloth diapers and what we think of the cloth diapers and would we recommend the cloth diapers or are we just pointlessly martyring ourselves over the cloth diapers and so forth and so on and etc. The thing is, there are about 500,340,201,430 (at last count) websites out there that discuss cloth diapers. Probably a good half of those sites specifically cover cloth diapering a newborn. I know, because I read just about every single flipping one while I was pregnant with Ike. Noah wore disposables, and honestly, it never even occurred to me that cloth was a viable, non-crazy-person option. I switched Ezra over to cloth diapers when he was around four or five-ish months old. I was sick of diaper rash and poop blowouts, and we were making all these other efforts around our home to be more (GAG) "green" and generate less waste and trash, so disposable diapers kinda seemed like something we should eliminate (ZING). That, plus our inability to EVER remember... Read more →

On Friday I thought, "Hey, you know what? People keep asking and asking for my opinions about cloth diapering a newborn, and I keep putting it off because I don't necessarily have 'OPINIONS' as I have many, many meandering pointless thoughts, but...whatever. I am writing those thoughts DOWN and getting it all out of the way and then many people will stop asking me for my important opinions that I do not actually have." 2,500 words later, I realized that maybe, JUST MAYBE, I had a little more to say about cloth diapers than I originally thought. Right now it's looking like a three-part series. I KNOW. I KNOW AND I AM SORRY. Back when I started this blog, I never in a million years would have dreamed that I would one day be the sort of person who wrote three-part series on cloth diapers. Perhaps, if I'd known, I would have re-thought the whole blogging thing in first place. But I didn't, so here we are. It's not my fault no one invented time travel, you know. Anyway, so that's...coming. Feel free to head for the dang hills. I wasn't able to work on it today because I had... Read more → 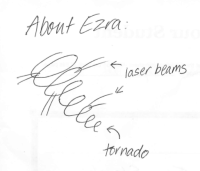 Dear Internet, You are officially a bad influence. Egged on by YOU PEOPLE, I did indeed turn in an About My Child form with this doodle on it. I did not stick around long enough to see Ezra's teacher read it, because I am a coward. Also, there was a parents' breakfast down the hall, and they had muffins. Ezra had a slight attack of the I'm-not-so-sure-about-this-school-thing this morning. He's so fearless and confident and verbal and smart and chomping at the bit for big-kid stuff, that sometimes I forget. I forget that yes, he needs just as much reassurance and patience as any other two-and-a-half-year-old getting ready to leave mom behind for the first time ever. Or, in this particular case, a good distraction, like being allowed to carry his very own umbrella. He left the classroom at one point and plopped himself out in the hall in a fit of defiance, demanding to know where I was. (Shoving my face full of muffins, is where I was, while Baby Ike was passed around the room from mom to mom like a squooshy little football, igniting baby fever like wildfire.) I peered around a doorway while an aide and... Read more →

Last night, while I was making dinner (ratatouille and polenta, but if any of the c-h-i-l-d-r-e-n ask just call the v-e-g-e-t-a-b-l-e-s "sauce," okay?), I just happened to glance in the direction of the living room right when Ezra climbed up on the back of the couch...and toppled the crap over, headfirst, onto the hardwood floor. Jason and I bolted towards him in that excruciating slow-motion-feeling way, like you're already running before the screams even start but you're still terrified you won't get there until some awful injury manifests itself. I think Jason may have skipped going around the couch and just leapfrogged over it, because he had Ezra scooped up in his arms before I got there. (Though I was slowed down by nailing my hip on the dining room table, for I am incapable of getting from Point A to Point B without injuring my damn self.) Ezra was fine. He cried for a minute, asked for some kisses, and was off and running before I could get four words into my standard "AND THAT'S WHY WE SAY NO CLIMBING ON THE...argh, forget it" speech. He. Was. Fine. This here toy cooking pot, on the other hand... His HEAD.... Read more →

Baby Ike officially turned three months old six whole days ago, but I truly believe that if I don't mention something, it doesn't exist. It's just one of my many mystical powers of bullshittery, actually. But now that another week has gone by, it's preferable to round his age down to "three months" instead of being all specific. Because 14 weeks old? Are you kidding me? Shut up. Just...shut your fat whore mouth already about my baby. Who is brand new. I haven't even taken the tags off yet. Okay. So. I wrote those two paragraphs at 9:15. It is now 11:22. That should, in and of itself, tell you what life with Baby Ike is like these days. Basically: 1) Toes, face, and bald head are distracting as all hell 2) NOM NOM NOM BOOBAGE 3) So many stripe-y convict outfits, so many hork-related outfit changes The "happy spitting" continues, yes. I keep saying dumb things like "OH I THINK IT'S GETTING BETTER" and then someone asks why I appear to have dumped an entire container of yogurt down the back of my shirt and I remember oh, yeah, I meant to change that. I must have gotten distracted.... Read more →

This one starts preschool next week. We visited his classroom and met his teacher this morning, and by "visited" and "met" I actually mean "ransacked" and "terrorized." His teacher is a Nice Young Man (SAYS THE DECREPIT OLD LADY) who just moved here from Portland and introduces himself to his little students as their "teacher...or guide, whatever you want, you know?" Another mother thought that was a beautiful way to look at things, while I was all, hippies! Awesome. It's high time somebody taught these resource-hogs how to compost. The school is Montessori, so the classroom is filled with impeccably ordered shelves of wooden blocks and shapes and flashcards...and then lots of weird shit, like antique metal bells and a towel-folding station. It all has A Point, of course, and is Deeply Educational. The children wash up in an old-fashioned water basin and are expected to be be gentle with breakable plates and vases. The atmosphere is serene and peaceful, like something frozen in time from a gentler, simpler age. So of course Ezra barrelled in at top toddler speed, all WHERE MY GARISH PLASTIC DISNEY-PIXAR LICENSED CHARACTER CRAP BE AT? He shot around the room like a pinball on... Read more →