(I don't really think I'll ever be able to adequately top my last two entries, short of accidentally setting my hair on fire while being mauled by a squirrel. Yet I'm forging ahead with posting new stuff anyway, lest I fall into performance-anxiety-fueled writer's block, or wind up on the evening news with the headline AREA BLOGGER ARRESTED FOR THROWING LOAVES OF BREAD AT WILDLIFE, LATER TESTS POSITIVE FOR HIGH LEVELS OF FIRE EXTINGUISHER FUMES.)

Noah's grandparents sent him a Stomp Rocket for his birthday. We'd offered a few gift suggestions, all of which were rejected because they wanted to get him an outside toy. (Go ahead and insert your own passive-aggressive subtext to THAT one.) So the Stomp Rocket arrived and Noah promptly assembled it and started stomp-rocketing all over...the ceilings, inside our house. That was pretty fun.

Finally I managed to convince him that it really was a more appropriate toy for OUTSIDE the house. For those of you unfamiliar with the Stomp Rocket, here's how it goes: 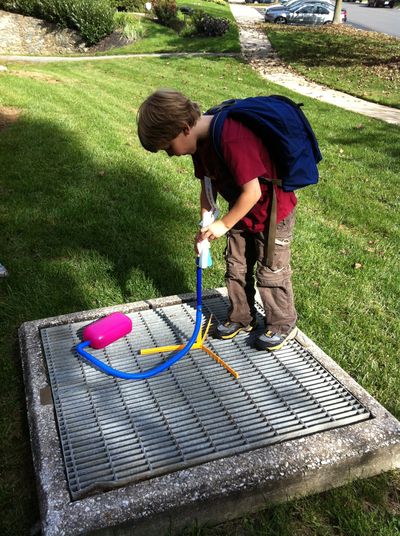 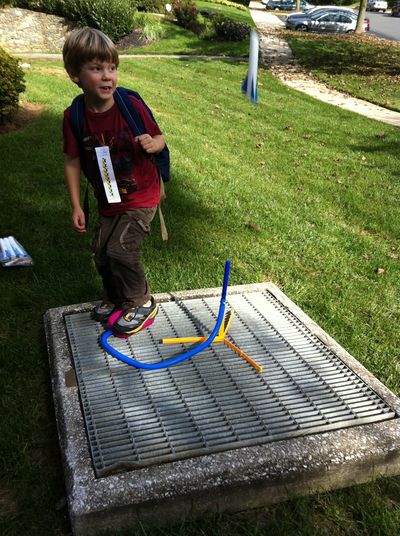 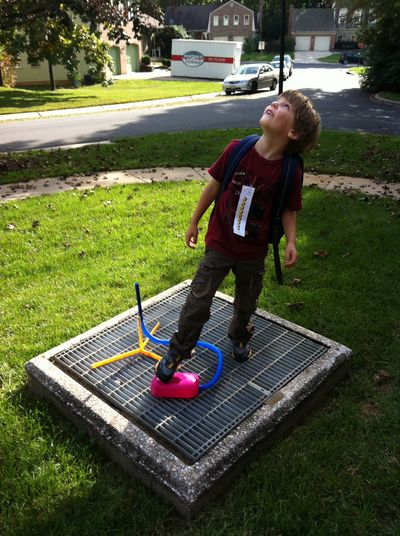 However, for the betterment of the community, by which I mean ANYBODY RELATED TO MY DUMB ASS SELF, I would like to add a couple additional steps:

Step 5: Pay close attention to where your child's foot is during the whole "attaching rocket to launch-thing" part 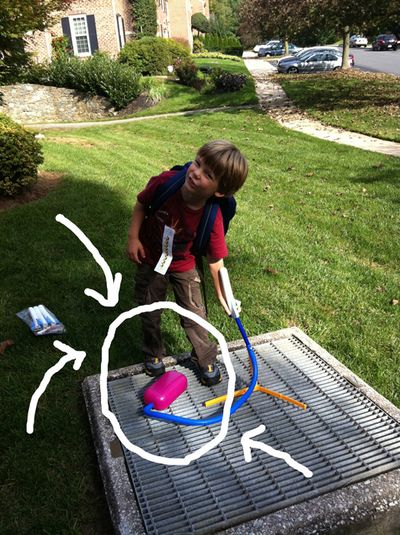 Consider having a little chat with him about this. And cause-and-effect. And propulsion. And...science.

Step 6: GET YOUR BRAIN CHECKED, BECAUSE SERIOUSLY, HOW CAN YOU NOT SEE WHERE THIS IS GOING? YOU'RE TAKING PICTURES OF IT, FOR CHRIST'S SAKE. 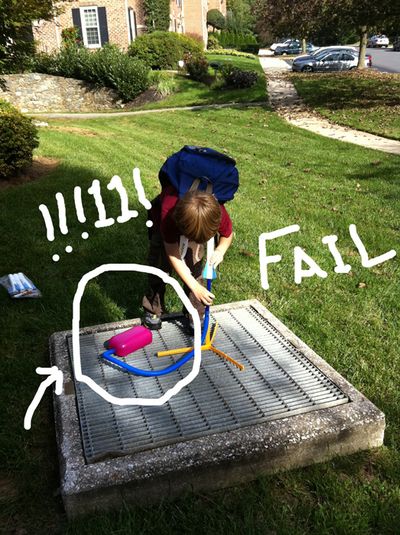 Step 7: Instead of cursing the spotty cell phone reception in your own front yard, be GRATEFUL that your stupid color-saturated Instagram photo upload failed, you know, the one you were trying to caption with "Stomp Rockets are made of magic! Everybody go buy one!" right at the exact second you took your eyes off your child...who proceeded to shoot a foam rocket directly into his eye socket. 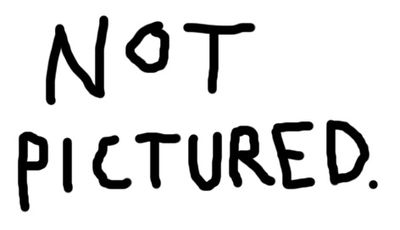 Step 8: Go back inside, offer cold compress and a lollipop 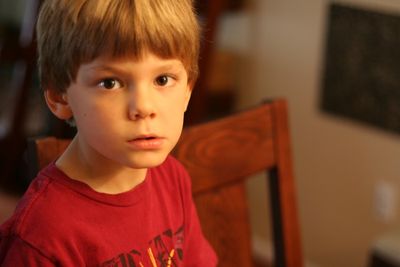 (No black eye, miraculously enough. Just the cool, even stare of a child who thinks this is all your fault.)

Step 9: If anybody asks, blame an icicle

Yeah, we have some of those. They haven't gotten themselves in teh face, but they've gotten each other. Good times!

Seriously, though, when did Noah turn into this giant boy? What did he do with the babyness?

If you want awesome blog fodder to top all blog fodder, attach an actual lit rocket onto that focker and watch what it explodes! Blog fun du jour!

bahahahaha. Congrats on a circumspect instagram app. I haven't gotten that upgrade yet. My little bro had one of those things and I kept trying to get him to just tie a really long piece of yarn or something to the rocket but he was all "physics" and "drag" and I was like "No YOU'RE being a drag" and long story short I stabbed the air mattress with a pen which I dropped on it several times with great physics and hardly any drag.

My super-physical son would LOVE THAT TOY. That kid is nuts. He's so rough with everything! I only had a sister. I don't understand the need for so much destruction.
Also - he would probably try to shoot it directly into his eye and the eyes of everyone around because he'd think it was funny.
We call him Captain Destructo.

Oh the fun of being an oblivious child, failing to see the consequences of your actions until they've played out. I have the physical scars of such excitement because all we had were rocks, bigger rocks and lawn darts. Safety foam - saving the next generation from irreparable physical harm.

Haaa ADORABLE! At least he's a good sport about it.

OMG so cute. I'm 22 and have been reading your blog for like... 2-3 years and every single freaking post makes me want a child. Especially one with a STOMP ROCKET.

When the bird was in your house, did you ever consider shooting at it with the stomp rocket?

Anyway, I bet Noah will be back out in the yard with that thing in no time!

When you do launch it with success, the rocket lands in a very tall shrub, and there is a whole new level of excitement trying to get the rocket back. It is a lot of fun assuming you can be away from shrubs and trees or have a step ladder nearby.

@Megan The box says it's the Stomp Rocket Jr. Glow. Ages 3 and up. It came from Amazon, I think.

An icicle? Totally blame the grandparents!!! (Or the outside!!)

My son got one of those for his fourth birthday the other week (thanks to my parents). Yes, to all of those steps with an addition to step 3; parent retrieves the rocket from neighbors yard (smiling sheepishly at the neighbors each time).

Fear not. The life of the Stomp Rocket is directly proportional to the number of foam rockets you possess. Which diminishes rapidly as they get stuck on roofs. But if he loves his Stomp Rocket, stock up on refills.

Why is there a subway grate in your yard?

Why is there a subway grate in your yard?

FWIW.. I like the mundane stuff even more than the end-of-the-world/bird attack stuff, and I bet I'm not alone. Keeping doing what you're doing.

This post, for example, was golden. And kind of evil, because it's clearly Wrong To Laugh At, but we don't really have a choice. (Though, on the bright side, that'll learn the in-laws..)

FWIW.. I like the mundane stuff even more than the end-of-the-world/bird attack stuff, and I bet I'm not alone. Keep doing what you're doing.

This post, for example, was golden. And kind of evil, because it's clearly Wrong To Laugh At, but we don't really have a choice. (Though, on the bright side, that'll learn the in-laws..)

Glad Noah didn't put his eye out. But have to say I LOVED the Stomp Rocket. Wish my now-17-year-old high school senior was still so easily amused by a flying foam rocket. Those were the days! My son's grandparents bought him a CAR!! Now, there's a dangerous outside toy.

Dude... we had one of those. It's great until the cheap-ass plastic springs a leak and no longer shoots rockets in the air.... just blows dust out the sides and makes kids really sad! My Noah attempted to put it back together with duct tape and all, but that caused way more frustration, was unsuccessful and when he wasn't looking I put that piece of shite in the garbage!

Don't shoot your eye out!

My son got a stomp rocket for his fifth birthday. My husband had just returned from a week long business trip. Jack wanted me to show Daddy how it worked (because the heavier you are, the higher the rocket goes!).

I jumped as high as I could, and as soon as I landed on the stupid thing my feet flew out from under me and I fell hard on the driveway.

OMG What a week this is hysterical! Love Noah's expression!! Thanks,

Stomp rockets are awesome! But ours has only ever been used in the house....

So am I the only one who thinks a Red Rider BB Gun would be GREAT for Christmas?! I mean, look at all the practice you'll have by then!!

I'm reading the whole post just repeating to myself, "Please don't let the grate collapse beneath Noah!". So I was relieved that the physics experiment only ended up with a foam rocket in the eye. I, however, am also guilty of standing on the sidelines photographing my children's mishaps rather than interrupting and preventing. You'll never make it on America's Funniest Videos if you don't let things progress to their natural conclusion. I tell my kids that life lessons learned the hard way are rarely forgotten. That's just good parenting ma'am.

Am I the only one who's sad we didn't get the birthday video montage this year? I know, I know, you have, like, other things to do (see: new baby, many other blogs) but just for the record, the birthday montages are some of my favorite things you've done on this here blog. They make me all weepy, and I don't even know your kids except on the internets! Can I request one for Ezrah, since he's clearly grown up so much this past year? Am I just being creepy now?

Melissa-- there was a birthday video/pic montage for Noah's birthday.

Melissa-- there was a birthday video/pic montage for Noah's birthday.

See, that's the beauty of this blog (and of course, you). You don't need crazy things to happen to you to be hilarious. You just are hilarious!

See, that's the beauty of this blog (and of course, you). You don't need crazy things to happen to you to be hilarious. You just are hilarious!