Like many ineffective parents, we use a token/incentive system to bribe our children into behaving. If you can make it through a few paltry basic tasks without losing your everloving shit for no apparent reason, we will award you with a shiny magnetic star.

Accumulate enough of these shiny magnetic stars throughout the week by doing advanced manuevers in civilization (like "put your clothes on your body" and "hygiene" and "eat enough non-chocolatey sustenance to keep your organs functioning"), and you shall be rewarded with the prize of your choice.

Oh my God, you guys. My kids are the biggest nerds. 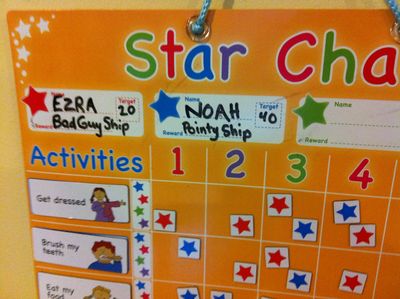 Would be this one. The Klingon Bird-of-Prey, as seen in Star Trek III: The Search For Spock.

Noah is particularly keen on reaching his goal this week, since he's already constructed the Romulan drill out of Legos and figured out how to make a black hole out of a t-shirt.

(And of course, he already has good 'ol Bearius Care's ship, the Emperprise.) 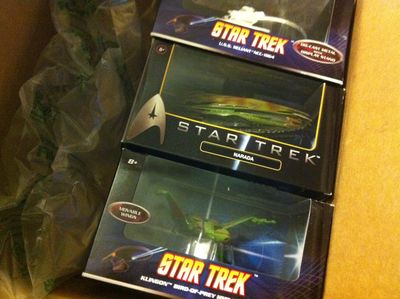 The ships have already been purchased in anticipation of the boys' success. (Along with some likely candidates for next week's objects of Star Chart desire.) The wait to get them out of the boxes may be killing Jason a little bit.

Oh, Baby Ike. You are just so doomed to inevitable dorkdom in this house.

I have been wanting to implement a chart system like this - but haven't found a chart that I like. Would you mind sharing where yours came from? I love that it has room for more than 1 kid.

Also? My little one makes his bad guy ships roar too!

@Jessica - We found it at a local toy store (Toy Castle in Potomac). I couldn't find it on Amazon, but it's by a company called DooWell Magnetic Games, if that helps.

As the soon-to-be mother of a boy, I am taking an even more especial interest in your blog.

However, I kind of want a chart for me. I feel that "showering on the weekends" and "putting away the laundry" could earn me stars, and maybe then I could get a prize. Not necessarily a star trek ship, but perhaps a new pair of shoes? (How many stars do I need for that?)

Have the charts been working?

I tried implementing such a policy here, but the requests were getting out of hand. All he ever wanted was: a) "a sharp pointing stick thing with some kind of a propeller for chopping stuff up;" or, b) a catapult.

So now he eats chocolate, sleeps in a messy room, and doesn't bathe. But, we get to keep our eyeballs.

Oh I can't wait until he's running around behind them yelling "Gimme ships! Gimme ships!" Especially if it comes out shits.

Ha. Outside of my idiocy of assigning YOUR baby speaking roles, how're the charts doing overall?

And LOL @ Erin. I want a chart too! For washing the dishes...not moving to a secret location (without them)...humping mah husben...where's my priiiiiize?

Bad guy ships can totally roar. My two-year-old daughter is adamant that helicopters are growling, and that just makes her really, really excited about them.

"Without losing your everloving shit for no reason" SUMS IT UP SO WELL.

I love your family.

The chart is awesome. Too bad I couldn't find one like that when my teens were little. I don't suppose it will work on them now? Of course, instead of ships, they'd probably want money. *sigh*

And today I have washed dishes and clothes, wrote a blog post, entertained a friend that stopped by unexpectedly, started supper in the crock pot, and made several pitchers of iced tea. I even took a shower, so I was not stinky while doing said things. And I did not lose my everloving shit even once. I want staaaars, lots of staaaars.

Chart seems to be out of stock for the year. but here's a link i found.

Wow, you are way cooler than me. I hand-printed "1 ticket" on paper strips and he keeps them in a little trinket box. 10 tickets = prize. I usually pick the prize based on our checking account balance. :)

I love Ike's face as he rolls! Also, my 8 month old is already crawling and pulling up to stand. Why do their older brothers insist on teaching them to be active!?!

My word Ike is cute. That face!

So I have to ask...was Noah wandering around nekkid with death-breath on days one and two, or do they just have to do the tasks unassisted?

Also, we have already decided that one of the first things we are buying our baby (girl) when she is old enough is a ton of Legos. She will never know that most people think of them as a boy's toy, because we freaking love Legos.

I love how in the third picture Ike's all "oh crap!" only to be like "I did that on purpose" in the last pic.
You make the most adorable dorks!

I noticed that the bar has been set much higher for Noah than Ezra - 40 stars vs. 20. Is that because Noah's older or naughtier or both? LOL!

I was just talking about buying something like this for my almost 5 year old, so I got a good chuckle today with your blog. Thank you!

I did find the one you have online if anyone is interested...

We had a chart system like this when I was little. It rocked. I got lots of add-ons for my wee little dolls. I remember it fondly.

Thank you friend i find your blog very creative & informative.

Further to Erin's comment, fasten some Swiffer cloths to Ike's diaper and Presto! Chango! a Roombah for hardwood. Right? Of course! Right!

A toy every week? For each kid? This seems a little excessive to me, although it might work best for your family.

Adding that up, though, it's 104 new toys a year in your house (not including birthdays and holidays and gifts from other people like grandparents). That's a lot of toys.

We did things other than toys. A slush from sonic, a new pack of bubble gum, chose a movie rental.

@ Linda it doesn't always have to be toys. Perhaps this time it was just something they wanted.

#1: Ike is getting more beautiful by the day. and #2: You kill me - I just finished a post on the happy use of bribery...it's like they say: great moms bribe alike!

The monitor in the background clinches it - dorkdom.

I am such a dork that I knew exactly, exactly what ships your boys were referring to before I even saw the pics. Oh, and I have no boys. And no brothers.

Your family seems all sorts of awesome.

I think you rae a lovely lady and your kids are neat. But it doesseem to me, in wee new zealand, noticeable how much STUFF you buy your kids. I'm sure you are within normal parameters for where you are. But here (at least in my house and I don't think I'm abnormal for my town in NZ) toys are very very rarely bought. And certainly not of the calibre you're offering. Thats definitely a Christmas present toy. But maybe thtas because my mob don't play with toys all thta much. I got sick of buying them things when all they really play with is the tree outside, a rope and a carcbaord box. Anyway, love your charts!