NOTE FROM THE MANAGEMENT: Please direct any complaints about the lameness of this post (and I assume there will be multiple)to my husband, who decided it would be fun to make me a margarita at 11 pm last night, even though he KNOWS that tequila and I broke up over a decade ago for a very good reason, and that very good reason is that tequila likes to wake me up at 4 in the morning by clubbing me in the face with a two-by-four.

Besides getting my ass kicked by a single mean-drunk cocktail, I am also running low on things to talk about. Seven other blog deadlines in addition to my regularly-scheduled freak-outs right here are fine and manageable some weeks. Other weeks I'm all panting and crazy-eyed by Friday, like OH MY GOD I DON'T WANT TO TALK ABOUT BREASTFEEDING ANYMORE. (Seriously, though, it does come up a lot. Exhibit A, and B, and a totally cheaty C.) 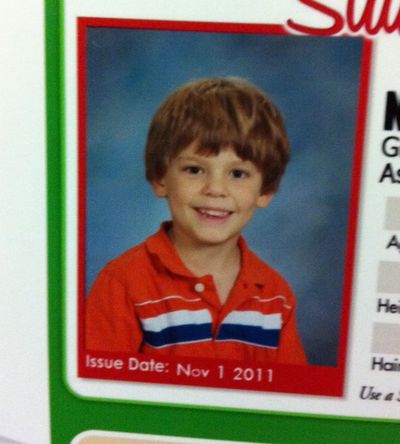 School picture time! This is, without a doubt, Noah's best showing in a school portrait. While I am of course majorly biased in my belief that he is an incredibly handsome child, I have to admit that there is something about school pictures that transform him into a slightly demonic-looking gooberface.

There's a big trend among this portrait companies to shoot in front of a green screen now so parents can select from a variety of cheesy-looking backgrounds. I geninely think they're missing out on an opportunity by not offering something like this one. 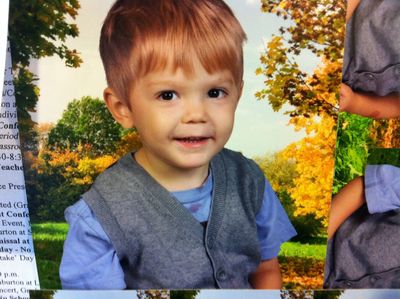 And then there's THIS KID, who looked so absolutely adorable in the one-inch photo preview the portrait company sent home that I was POWERLESS to resist buying a super-expensive portrait package with a gazillion and one wallets, but who I JUST NOW NOTICED managed to dribble some kind of bright red liquid all down the front of his shirt. (Way to go, preschool! You apparent bunch of rookies.) He also has a band-aid on his arm, just to complete the "Don't Let The Vest Fool You, I Am A Fan Of Bar Fights" look and feel of the whole thing.

Here's Ike, who we all know by now has two basic expressions: Schmoopy glee or WTF IS THIS SHIT, MILK LADY.

Here's my makeup-less self showing Ezra how to use the Incredibooth app.

And here's why that may have been a mistake.

I'm deleting about 20 of these A DAY, at least. 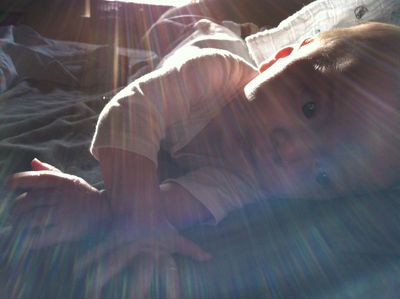 Also a daily occurrence: me attempting to get "fancy" with the morning sunlight, resulting in streaky, blurry photos of my baby's giant head. 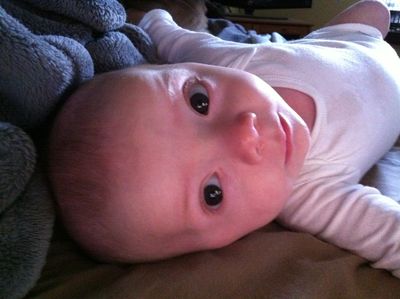 YOU KNOW WHO'S REALLY ANNOYING? THE CAT. HE'S ALWAYS TRYING TO SNUGGLE WITH ME AND GET ME TO PET HIM EVEN THOUGH I MOSTLY JUST PULL ON HIS EARS BECAUSE HE'S JUST SO DAMN NEEDY AND... 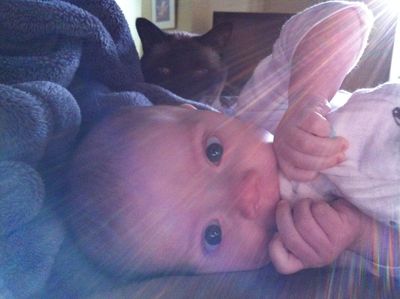 He's...totally right behind me, isn't he? Crud.

Aaaaaaannnnd that's all I've got. Time to go parent through a hangover, because I am a winner and an awesome grown-up and also a noted Internet parenting columunist who knows ALL THE THINGS, except how to see through my husband's transparent attempt to get laid and ruin my Friday.

OMG, wait, there is a photobooth App???? Must. go. download. now. (Clearly this blog post was not pointless!)

I never would have noticed the dribble on Ezra until you mentioned it - his still-nommably-adorable-psuedo-big-kid-face takes all the attention.

Also, Noah's picture is adorable and not at all demonic. Unless there's an instagram filter that can add redeye and horns, in which case I suppose it might work.
And I have to mention Ike because I mentioned the other two, although it's mostly like "same cute as always, move along"

In the last pic of you and Ez (of the set of four), I could see SUCH a resemblance to Baby Ike! Same expression, big eyes. Oh the cute! How you managed to have three sons that are all that cute is completely impossible to understand.

Jose Cuervo is my boyfrin. And he ruins many an evening for me. Cheesy background pics slay me! But they are no match for that cuteness that must must must be purchased.

Know what's worse than parenting through a hangover? (because everyone looooves the I have it worse game)

Parenting your own parents who are in their 80s because one has pneumonia and the other has a heart condition and also manflu. I just had a couple drinks last night so I could stay up and do their laundry and dishes and dinner without collapsing from exhaustion. Yeah, breakfast this morning before work was painful.

PS, They're chatty morning people. I may not make it into next week....

Ah, yes, the taking of 29875839 random pictures on your camera phone. Wait until they get old enough to start taking pictures of their penises. Not that that's ever happened to me or anything. (I have three boys and a girl. It's something else, I can tell you.)

Hey, at least he put some effort into the trying-to-get-laid thing. Mine just pulled out the puppy eyes. I'll have to remember to hold out for the cocktail.

Every day you post on here makes my life brighter and brings a smile to my face. This is the Thanksgiving month and I am so totally giving thanks to you for sharing to so many of us.

I like (and appreciate) your writing no matter what. In fact, I often wonder why you try to make excuses when there is nothing to make excuses for - you are a GOOD writer and being able to write so well about 'anything' or 'nothing' (as you sometimes put it) in the consistent and humorous way that you do is typical of a GOOD writer. It's always a pleasure coming to your site!

Those last two pictures-oh man. SO FUNNY. Most hilarious cat pictures EVER.

And those boys are all adorable.

You totally got me with that last sentence. HA! Awesomeness.

I know I shouldn't laugh at you but I do. Someday you will look back and miss all this and laugh also. Maybe if you kiss Ike more he won't grown so much?

My husband uses the same techniques :-), most of the time only on Fridays or Saturdays though. Sandra

My husband uses the same techniques :-), most of the time only on Fridays or Saturdays though. Sandra

I still can't see the dribble or the Band-Aid. In my son's preschool photo, they gave him a football to hold. WTF??? They also did the incredibly evil thing of giving us as a set of "proofs" all the prints from the biggest and most expensive package of school photos and saying, just return any photos of your preshus snowflake you don't want, and payment for the ones you keep. And that's how we ended up out $65, with an inordinate number of 8X10s of a 2 1/2 year old in front of a fake autumn day, holding an inexplicable football.

Bahaha... I love your last sentence. That's my husbands way of trying to get lucky as well. Most the time it just helps me pass out earlier... he is starting to rethink his plot a little more these days. Hey at least they are still trying even when we've birthed 3 kid's and look like death come Friday! Have a wonderful weekend. I just love your blog!

I can't get over how cute all of your boys are. You are lucky that you are their mom, because even for the layperson, it is IMPOSSIBLE to pick the cutest!!

Oh I swear I'm not spam, but I sure do hope that one of the kids gets Jason this for Christmas (the link in the URL line).