That's not so much of a post title as it is a command. To myself. I have absolutely nothing to talk about today, in particular, and I even spent the entire weekend wishing extra hard that *something* worth blogging about would happen. The following is the closest it ever got to that point: 1) I saw Paranormal Activity 3 on Friday. This was by choice, at my own damned insistence, even though the first two movies just about turned my nervous system inside out. WHAT'S THAT NOISE OH MY GOD SOMEBODY GO CHECK THE POT RACK FOR SIGNS OF DEMONIC POSSESSION, etc. While waiting for Jason to come back with the popcorn, an entire family waltzed in, with a whole pack of kids ranging from preteen all the way down to no more than four years old. Being the tireless champion for children that I am, I glared pointedly at the parents and bitched about them on Twitter. The coming attractions started and I continued my silent judgy fuming, waiting for one of the kids to lose his or her shit over sci-fi horror trailers about people disintegrating or whatever the hell, even I know better than to pay attention... Read more →

AND THE CHEESE TRIANGLES DON'T GO THAT WAY EITHER 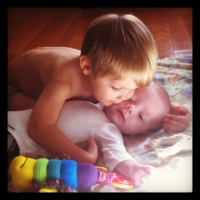 It's been a...well, it certainly has been a week. (Said with deep, emphatic, eyebrow-raising emphasis.) I'm all jumbled up inside, unable to put the not-so-good stuff into words and the not-that-terrible stuff into a humorous context, like: usually a story about an overflowing toilet during a playdate should be good for some pathos, right? Except when the overflowing toilet overflows twice (because said playdate wouldn't stop flushing it over and over) and floods the basement bathroom at the same time, and this happens right after you learn that your kindergartener was sent to the principal's office that day for behavior problems, and then came home and declared himself a "loser" because of it and begs you to "sign [him] out" of kindergarten, and "sign [him] out FOREVER"... And right before the cat starts vomiting all over the house and taking random bloody shits in the kitchen... Which turns out to be an extreme yet ultimately run-of-the-mill reaction to SOMEONE accidentally grabbing a similarly-labeled-but-actually-different bag of cat food at the store, which is a relief...right up until the moment you exhaustively collapse into your bed...and discover that oh, the cat puked there, too... And then the baby wakes up at 1:15... Read more →

Noah still won't dress up for Halloween, by the way. Won't even consider it. In the past we've managed to get him semi-costumed at the 11th hour via: 1) Lying. 2) Candy-fueled panic with a side of peer pressure. 3) Bribery. While I was debating which one of these FANTASTIC options to go with this year, my mom actually had an inspired idea: Why not just let Noah wear his karate uniform? I asked Noah what he thought about that: It would look like a costume without actually being a costume. We'd be playing a little trick on people, kind of. He liked that idea. He liked that idea a lot. "Everyone will think I'm the Karate Kid from the movie but actually I'm just Noah the Karate Kid. From real life." It didn't exactly make for very exciting pictures, but still. This is easily the happiest he's ever looked on Halloween. And everyone in the neighborhood was completely fooled by his non-costume costume. Ezra, on the other hand... Ezra just can't even deal with any of y'all right now. I mean, God. You people. Around 5:30 pm, Young Master Ezra was sent to his room for a time out.... Read more →