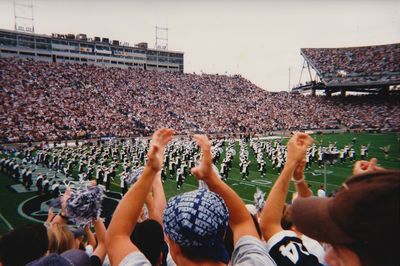 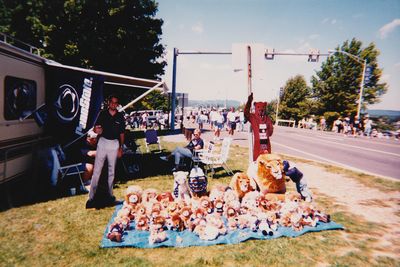 I ran upstairs last night and shook Jason awake. JoePa! They fired JoePa! And then we stayed up for hours watching ESPN, watching the students wander aimlessly around downtown while the eternally-present-and-obligatory group of drunk dickheads smashed some shit up for no reason, just like they did 14 years ago for reasons I don't remember. We won? We lost? We were pissed about increased late fees at the library? I don't know, but it always ended with a couch getting pitched off a balcony and set on fire. FUCK YOU COUCH YOU ARE DRUNK.

We stayed up watching the Paternos step outside their house -- a house I remember driving by, and the whole car went reverently silent once it was pointed out, because it was JoePa's house -- to blearily thank the "kids" who'd gathered on their lawn, only to be completely flummoxed and shocked by the giant seething mass of media that swarmed their doorstep instead. Because they probably still don't get it, how big this is, how awful. That it's not that you didn't do "enough," it's that you didn't do anything. You didn't do anything. Nobody did.

At 19 years old, I didn't know much of anything. I'd already attended and changed my mind about two different colleges already. I'd already lost track of how many times I'd changed my major and my career goals. I scored a dream job as a reporter at The Collegian and quit two weeks later. I thought maybe I'd try film, or literature, or social work. I didn't know how to get a fake ID but usually managed to get tanked regularly without one pretty well. I didn't get to go to many football games because I was broke and needed the weekend  hostessing shifts at The Corner Room and also liked having the job as an excuse when my parents asked me if I'd found a church yet. Beacause I didn't know how I felt about that anymore, either.

But one thing I know -- hindsight be damned -- is that if my 19-year-old self heard that there was a chance a child was being abused, she would have done something. If she'd been the one to round that corner in that locker room, there would have been screaming, kicking, hair pulling, something, to make sure that assault ended right then and there. If she'd been the one told about something possibly inappropriate going on, she would have hit 9 for an outside line to the police instead of to the office down the hall so it could be handled internally. No. Because something. You have to at least do something.

And I didn't need college to teach me that. We are Penn State.

And we are soooooo disappointed.

This post is spot on. The guy in the locker room (Mcqueary) was 28 years old (again...TWENTY EIGHT YEARS OLD). He wasn't a fresh-faced teenager; he wasn't a young kid; he was an adult...who witnessed a child being sexually assaulted.

I keep trying to think what I would do if I had witnessed such a heinous act and it usually starts with '...find a heavy object...'

My heart breaks for the victims. I don't give a rat's patootie for the people who covered this up.

Having lived through sexual abuse as a child, I can tell you: no amount of money or jail time will erase what these men did and failed to do. The firing of Paterno was an insignificant blip on the radar for the boys who lived this. Thank you for writing an intelligent, empathetic post that recognizes Paterno is not the story here. These boys, their horror, their nightmares come to life--THAT is what should be talked about; NOT "One more game!" as the drunk girl on ESPN so eloquently belched. I pray for peace for *all* the families involved in this.

Really well said Amy. This is a gorgeous piece that should be published, as others have said, it is one of the best I have read.

It's also nice to see that other's feel as heartbroken and sad as I do. I did not attend at HV, and I am not a huge football fan. But, I am still proud of my PSU grad degree, and I take my kids to see our lion here in Eastern PA. And, I have been in tears for days.

Your pictures tell of what we are all feeling: a joyous, fun, hopeful, community, and innocence, now terribly and tragically lost.

Also. FYI to anyone in showers with little boys? My husband and I from EPA PSU? Agree that we would both have swung a bat, and asked questions later.

This is such a rage inducing story. I too keep wondering WHY the person who allegedly witnessed a little boy being raped didn't intervene? HOW could you WALK AWAY and leave him there? It just brings tears to my eyes. I need to go hug my children every time I read about this.

I feel so disgusted by the actions of the entire university...
And I now feel very proud to go to University that does not have a Division I Football program. I hope those children get the justice and peace they so rightly deserve.

Yes, this is spot on. I was talking about this last night and wondering what these kids are protesting. If it had happened at my little college, there would be riots over the fact that children were harmed, not that the coach knew about it and did nothing. I am very saddened by their response.

Thank you friend i find your blog very informative.

100% yes. This story has devastated me on many levels. That anyone could see this and not immediately stop it and call the police is beyond incomprehensible to me. To cover it up is monstrous and to let this man have continued access to children is unforgivable. All the people who had knowledge of this should be tried as accessories to the crime in my opinion! They knew abuse was going on and did not stop it from happening.

Thanks for this. I am dreading Thanksgiving with the in-laws this year as they are a family of die-hard Penn Staters and Joe Pa-ers. I was already subjected to my SIL (a TEACHER!) tearing into "the media" for putting blame on poor innocent Joe Pa.

I think a lot of the Joe Pa vehemence is a way for people to not deal with the more painful reality: that one of the worst crimes in humanity was committed over and over again at a place that people loved. And that it was covered up by the very people who run that place.

I'm feeling so sad for al of my Penn State friends who didn't do anything wrong.

I know how I would feel if it were my school.

I might be the first dissenter in this post and for that I'm sorry, but I feel like Paterno is getting the shaft a bit. Isn't it the American way to give people the benefit of the doubt until their actions can be proven beyond a shadow of a doubt? Why is it that when we put a murderer up on the stand we're willing to say he's innocent until proven guilty but when a man who may have honestly done what he thought was best given that he didn't witness it directly and that he might not have had reason to believe it was true...why can't we do the same?

Don't get me wrong - he absolutely was in the wrong. He should have lost his job and he should be ashamed. He had a moral responsibility to do more than he did.

I'm just not sure that he should be the big focus of this. Why is the grad student not going down in flames when they WITNESSED it? After all, when they told Paterno there was still a chance that Paterno didn't have proof. He didn't see it, so it's just hearsay to him, so I can see him not knowing whether to go to the authorities accusing a co-worker of child rape or not. But the grad student just washed his hands of it without calling the authorities after he saw a rape firsthand? No.

I think the big thing that Paterno did wrong was that he didn't follow up. I have a hard time believing that there were no indications to him that Sandusky was involved in something insidious, but let's just assume for the sake of innocent-until-proven-guilty here that Paterno was acting on what he thought was hearsay and that he had no reason to believe that the grad student was telling the truth or that Sandusky was engaged in child rape...

...then I still don't understand why Paterno didn't follow up. If someone told me they witnessed my co-worker raping someone, I might not believe them. So I might not go to the authorities because I might think it's just people viciously wagging tongues. But I'd ask the co-worker directly what was going on, and I'd tell them that this person was accusing them of child rape. And I'd report it to my higher-ups and then follow up with them to see if there had been an investigation and if so what the investigation had turned up.

It's that - that Paterno didn't ask any questions, that he was happier continuing with business as usual - that upsets me about this. I know Paterno's going down hard because his name is so revered, but overall I think that if this is all true then Sandusky and the grad student are far worse than Paterno.