Okay, Internet. Here goes. There's something I haven't told you about Baby Ike. I don't want to sound all dramatic and hand-wringy about it, but I really can't pretend that it's not worrying me a little tiny teeny bit.

Ike cannot sit up unassisted. In fact, he can't even really sit up if he's anything less than *fully* assisted, as in, sitting in a Bumbo or with both of my hands on him.

Meanwhile, he's army-scooting around all over the place and occasionally getting up on his hands and knees. His neck control is perfect. Yesterday he pulled himself to almost a full stand from his changing table using nothing but the front of my shirt and the ends of my hair.

Yet in a high chair -- where he's currently devouring three or four ounces of food at a time and making really excellent pincher-grasp progress with self-feeding -- he still needs the support cushion to keep him from slo-o-o-w-ly pitching forwards and off to the side.

Being that this is not, after all, my first rodeo, I've been almost fanatically determined to not make a thing out of it.

Sure, both of his brothers were sitting up by well before this age, but comparing and contrasting babies is an exercise in stupendous futility. It's also stupid. And going through the developmental delay roller coaster once already sometimes actually helps with the inevitable parental worry and freakouts over nothing. I'm supposed to know what things will work themselves out and what's a true red flag. I've read books! I have worksheets! WORKSHEETS, GODDAMMIT.

Noah actually hit his first-year milestones the earliest of any of 'em -- one of the advantages, I think, of being born the size of a two month old. Ezra fell more into an average sort of timeframe, then made up for it by going all Evel Knievel on us in the go-go toddler years, which is when Noah mostly decided he was a fan of sitting still and not doing things or going places or touching stuff or talking about any of it.

And technically, seven-and-a-half months isn't really that "late." (At least according to all the people talking about their non-sitting eight- and nine-month-olds on Yahoo Answers, which I admit is not really the best place to be getting your parenting yardsticks, but HOT DAMN did someone SEO the shit out of that mess, because it's always the first 72 results on the page.) The Internet is a fount of anecdotal shit about babies who sat at five months and babies who sat at eight months, and every variation up to and including babies who didn't even roll over until 10 months but then stood up and starting walking the next day.

I'd at least reassured myself it's not "call the doctor and get an extra appointment" late. More like "I really hope he figures it out by his nine-month check-up so it won't be a THING" late. I blamed his long torso, his not-exactly be-thundered thighs. I mentally berated myself for every minute spent in the exersaucer or swing and dedicated 20 straight minutes a day to no-bulky-diaper bare-butt Sitting Practice. I reminded myself that babies are goddamn jerks who do things when they are ready to do things and had some more wine.

On the other hand, Christ, why isn't he sitting up yet?

Yesterday, at Noah's occupational therapy appointment, I finally caved and decided to be That Asshole. (You know, the asshole at a dinner party who learns there's a dentist in attendance and is all, "Can you take a look at my mandibular third molar?" and then doesn't technically wait for an answer.)

His therapist -- who has known Noah since he was three years old and still laughs about the day she met him, when he threw a fit and got himself wedged and stuck in a preschool cubby -- is incredibly chill and relaxed but obviously knows her shit. She was admiring Ike's tummy scoot and amazed at how close he is to full-on crawling, then started to talk about Noah's appointment...at which point I was like, "YEAH FINE WHATEVER THAT KID'LL BE JUST FINE BUT SINCE I'M PAYING FOR THE FULL HOUR CAN I TALK TO YOU ABOUT THIS OTHER ONE?"

I set Ike up on his butt to demonstrate. He wobbled for the barest fraction of a second with his hands tripodded for support, then started bobbing down towards his toes before executing a full-on faceplant on the carpet. SPLAT. I doubt I could have counted to two-Mississippi in the meantime.

And, well, I saw the Look. Her eyes darkened, her brow furrowed.

Oh, how I know and hate that Look.

And suddenly I wanted to simply flip Ike back over and go back to praising his tummy-based mobility LA LA LA LA LAAAAAAA.

What had I expected? You go looking for trouble, you'll find it. For every dozen babies who sat up a tad late there's the one who didn't, and GUESS WHICH ONE an occupational therapist who specializes in childhood developmental delays is gonna likely have as her point of reference?

We talked about it for a few minutes -- how much time does he spend in baby-containment things, do we let him practice sitting every day, we discussed his neck control and eye contact, etc. I did another non-sitting facesplat demonstration while she debated his core strength, at which point Ike was all, STOP THAT, IMMA BLOWING THIS JOINT, and scooted off like a half-paralyzed turtle in search of germy waiting-room toys to shove in his mouth.

"He's borderline," she said. "He's still got time. Everything else looks fantastic. Keep doing what you're doing."

(But I still saw the Look. 18 hours later and I'm still thinking about the Look.)

This morning I finally remembered that I have one extra special secret weapon: Blog about it.

Blog about it, knowing that the speed at which your baby rushes to make you sheepishly publish a "never mind!" retraction is directly proportional to how big of a freaking deal you make over whatever it is that you're worried about. It works every time.

Based on the number of words I've just dedicated to this non-topic, he'll be sitting by tomorrow, I bet. 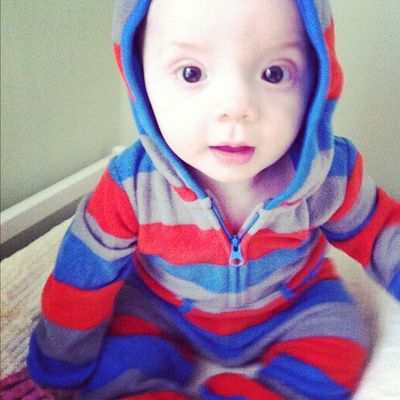 (Not pictured: Me holding his hand while snapping the picture quickly before the faceplant.) 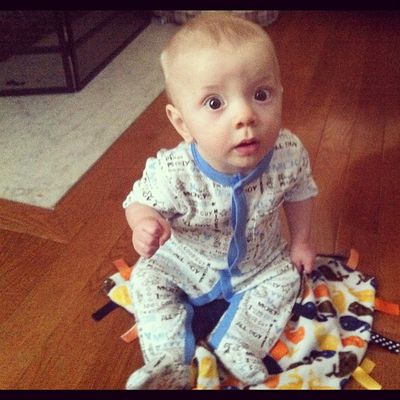 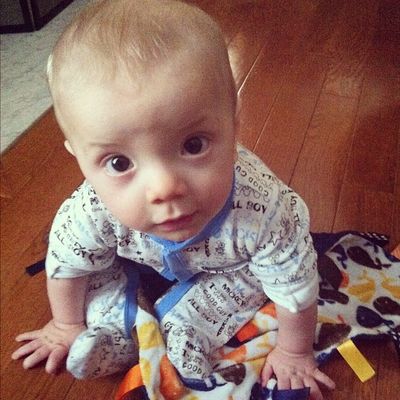 MORE ANECDOTES. YAY! My bundle of joy was seriously long and skinny, and she started crawling really, really early like 4.5 months and no one threw a parade, but they all flipped the F out when she wasn't really able to sit around 7+ months. And then she did. I can't exactly remember when, because I was pointedly determined to NOT FREAK. She's totally cool now. 12 months, doing typical baby stuff. I think the long, skinny ones often struggle with the sit-up.
Also, I know what you mean about freak-out-so-the-problem-will-go-away. I used to buy pregnancy tests so I could get my period. Worked like a charm. <3

MORE ANECDOTES. YAY! My bundle of joy was seriously long and skinny, and she started crawling really, really early like 4.5 months and no one threw a parade, but they all flipped the F out when she wasn't really able to sit around 7+ months. And then she did. I can't exactly remember when, because I was pointedly determined to NOT FREAK. She's totally cool now. 12 months, doing typical baby stuff. I think the long, skinny ones often struggle with the sit-up.
Also, I know what you mean about freak-out-so-the-problem-will-go-away. I used to buy pregnancy tests so I could get my period. Worked like a charm. <3

I heart you. Because my son (about 2 weeks older than Ike) juuust started sort of sitting-stably-when-fidgeting-with-some-toy-placed-strategically-between-his-legs in the last week. And this has been on my mind. A lot. And then of course, I start the googling and read the baby milestone charts on and go off the rails. He has improved drastically in the last week with sitting, but yeah, so mind-consuming. And hard not to compare with my daughter.

Oh man, I can't stop 'LOLing' from that last picture. Spock eyebrows and all.

That's one super adorable baby you've got there! I'm sure he'll sit whenever he's ready. Do you have an exersaucer for him? That helped my little ones get core strength because they had to move themselves around and not faceplant if they wanted to play with all the toys!

lol u mad bro? you crack me up.

See, this is why I need a blog. Clearly my six month old will not sit up until I blog about his refusal to. Dangit.

Laughing my ass off Aren't babies just that way? I'm kind of glad I waited to comment. That's hilarious. "Oh, I just didn't feel like sitting. "TIL NOW."

This baby looks soooo sweet!!! I wish everything to be fine!