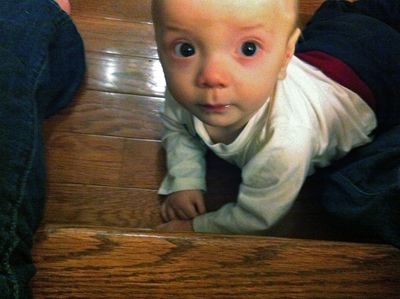 Over the weekend, Ike developed an obsession with the step in our living room. He spent a couple hours scooting back and forth in front of it, touching it, putting toys on top of it. At one point I caught him lying on his back and intently examining the lip from below. Fucking steps, how do they work?

He was like a raptor in Jurassic Park, investigating the electric fences. Looking for weaknesses.

Yesterday, he found one. 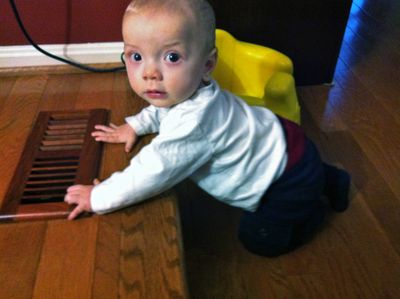 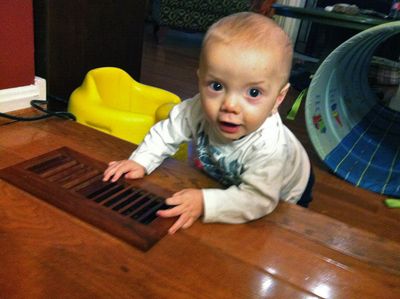 About five minutes after discovering the finger-gripping, body-dragging properties of the floor vent, he managed to pull himself up and over the step. And then, resisting the siren call of That Random Power Cord That I Need To Move Right After I Figure Out What It's Even Bleeping Connected To In The First Place, he was so pleased with his new skill that he promptly rolled right back off it, just so he could climb up again. 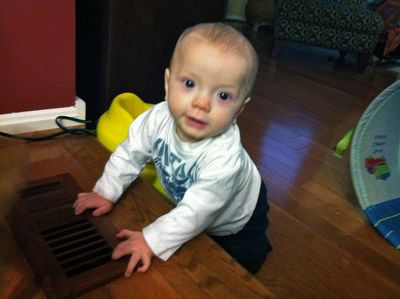 There's something indescribably awesome about watching a baby purposely figure things out, as they scrunch up their faces and drool from all the tremendous effort it takes to get soupy brains and uncoordinated limbs in gear. And yet so bittersweet, because slow down, baby! Your head still bruises like a peach and the world is just so sharp and pointy. 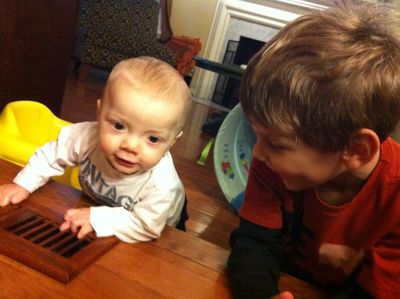 Noah is very proud. Noah is still a bit unclear on the concept that baby brothers turn into actual little brothers. 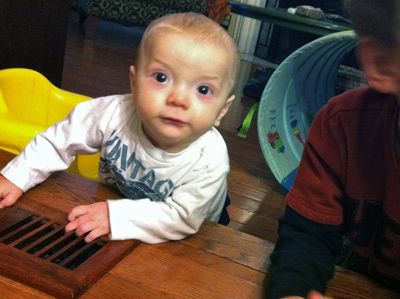 HIDE YO KIDS HIDE YO LEGOS

(I should acknowledge that yeah, I don't actually have pictures of him making the final leg of the climb, because I decided to videotape this attempt instead. I got some absolutely terrific footage of him losing his balance and thwacking the shit out of his forehead on the wall corner, though! Look for it in his first birthday montage video, or perhaps a parental competency hearing.)

Oh, baby Ike. Slow your roll. Literally. It's amazing seeing his progression so I have no idea how it actually feels for you to see him all doing shit for the express purpose of doing shit. All non-baby like. We need a pause button.

I love it. Absolutely one of my favorite things to witness as a parent so far (even when it most likely leads to more head-cracking).

I noticed your son Ike seems to have that feint glimmer of pride in his eyes; sort of like, look what I've done ma! My son gets that too. It is so awesome.

He looks so much like Ezra in these pics, to me.

Awww, baby Ike! So cool when that "first" thing happens... whatever it is.

He is a mini-Ezra in that last pic!!

Oh, mobility! This morning my daughter tried to launch herself face-first off the daybed; overnight it was frantic rolling-rolling-rolling along the mattress; during the day it is trying to get anywhere and everywhere (still backwards, we haven't managed the forwards momentum yet) ... SO GLAD we don't have stairs for her to investigate! (Plenty of hardwood for her to knock her head on, though)

Gah! He is so stinkin' cute! I love watching baby brains work!

Um. I am just glad that my husband and I aren't the only ones who spend our free time watching Insane Clown Posse videos on the interwebs.

And thank you for sharing his discoveries with us (our hearts bruise like peaches in your blog ;)

The 9 month old twins I watch, both wear helmets (for head shaping issues)and it has been a blessing. Saves their noggins everyday!

I know! Put him in a hamster ball. Now the cat can have fun too! :p

I remember watching my first son as he figured things out. Like hey, you ARE a little person, look at all that synapses happening right now in that little mind of yours! I don't have that as much with my second. He's doing stuff. I just...am busy? Have seen it before? I don't know... Please tell me it comes back with number three! I hate feeling so mom-jaded!

OMG, love your Antoine Dodson reference! Just thinking of that video makes me giggle...
Your baby is so smart!

(And I am dying to know where you got your longies. Certain sellers that you've had good luck with? Maybe just ooooone more CD post? Pretty please!!! I'm venturing into fitteds and wool/fleece with this new baby and while I've managed to dive headfirst into the fitteds - I'm paralyzed over my first wool purchase.)

Wait until Ike realized the best thing about those vents is that he can shove your credit cards and your drivers license through them. That was an awesome day around here.

Hide yo kids, hide yo wife, cuz Baby Ike crawlin all up in heah.

Awwww hilarious but just too funny. I root for you because, well, let's just face it - us parents are the underdogs in these scenarios. But you're so write. These moments where they figure it all out are so fantastic to watch.

We had a step like that between our kitchen and living room when I was a kid. One time my sister, who was about ten at the time, was playing in my mom's wheelchair in the kitchen and tipped herself over that step into the living room. She wasn't hurt but terribly shocked. Would have loved a video.
http://bebesuisse.blogspot.com/

One of my greatest triumphs as a mom so far is teaching our four year old to throw up in the trash can. Of course, this was after a puke fest that led me to contemplate ripping up the carpet because there was no way I could ever clean enough to get all that vomited milk out. Ugh.