Home Archives About Subscribe Advice Smackdown Tip Jar
The Day The Magic Died Because I Accidentally Murdered It
"Teachers Don't Have Phones."

Dear Social Media: Please Invent A Button For Things I Simultaneously Like & Unlike At The Same Time

First, I want to thank y'all for making me feel SO MUCH BETTER about the Tooth Fairy thing. I'm so glad we're not the only parents who have forgotten about lost teeth and woke up to devastated, disillusioned children. GLAD, I SAY. I AM COMFORTED BY YOUR CHILDREN'S PAIN. WE ARE ALL TERRIBLE PEOPLE, HOORAY!

Second, I'm hoping today's confession will likewise be met with understanding instead of gasps of pearl-clutchy horror.

I totally don't mind though, because Ezra is my favorite sick child.

It's not that I enjoy seeing him sick and miserable or anything. It's just that he's just so...so... 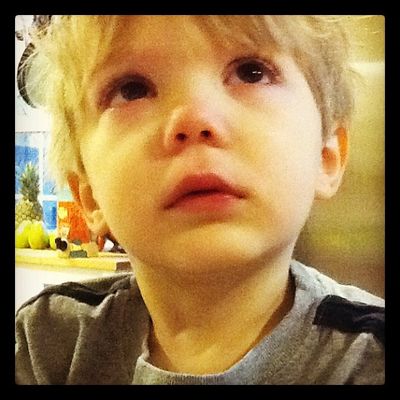 He's by far the most good-natured of the three when sick; the most likely to try his darnedest to Brave-Little-Toaster his way through it, right up until the moment when he decides instead to just curl up on the kitchen floor with a stuffed animal and a plastic waffle and take an impromptu nap.

Noah, on the other hand, tends to get extra difficult -- illness brings out more of his, shall we say, challenging sensory/Spectrum-y behaviors, plus that kid will fight a restorative nap and/or doses of Tylenol with every ounce of fever-fueled strength in his body. And Ike...well, Ike's a baby, and as I've discussed before, sick babies stress me the hell out.

A sick Ezra, though? Who basically melts into a warmish puddle of I Needs A Cuddle, Mommy and Read Me Anodder Story, Mommy and I Loves Your Hairs, Mommy and Shh, Lets Goes Sleep, Mommy? 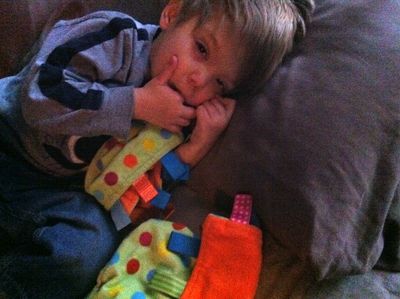 Yeah. I can deal with all that. Lets goes sleep. 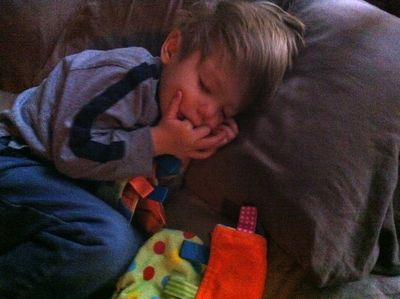 When you wake up I will make you some soups and we'll watch Wonderpets.

Aw. I wants to cuddle him.

Awww, he's so adorable with his little red-rimmed eyes and fingers shoved into his mouth for security. I wish I were close enough to help; I am usually pretty good with sick kids. Hugs for you both.

Awww. Feel better soon, Ez! And yeah, no big deal about the tooth fairy thing. It will be a great story for your family to tell in years to come. :-)

Awwww! What a sweet, sad, cuddly cutie he is! Feel better, Ezra!

Totally with you on that one. My (not so little anymore) guy is a cuddly bunny when he gets sick, too. And as long as the fever is less than 102 and he's not in pain or anything, I enjoy the heck out of taking a day off to cuddle with him.

I am dealing with the same thing, but in reverse. My baby is sick, and my toddler is healthy. The baby is normally the happy, sweet one, but apparently when he's sick? He likes to tell me how much he hates me, my face, air, the world, blankets, food, medicine, thermometers, doctors, his crib, his toys and life. He still likes: toes, his brother, the car. The toddler, on the other hand, who is a giant ball of energy, is kind of fun when he's sick, because all he wants to do is cuddle, and I get to stock up on snuggles.

Sick three year olds are especially delicious. Those last two pictures tug at your heart. Can I feed him a popsicle?

Awww. I admit I kinda like it when the 4yo is sick and cuddly too. She's so busy all the other times with DS play and stealing my iPad. It's nice to cuddle, even if it means I catch it.

That top photo--
ever since you posted those pictures of little you at your birthdays, all I can see is how much Ezra looks like you. In the top picture, especially.

I wish I was so cute when I am sick.

My son is also at his sweetest when sick, so I don't mind it at all.

(Unless it involves vomit.)

I'm sure my monster-in-law contaminated our gene pool. My 3-year-old ASD/SPD is godawful when he's sick. How do you get Tylenol in Noah when he's sick? Mine won't take it straight, and when we try to hide it in some apple juice or TrueMoo, he refuses it.

Hope he feels better soon. The nastiness is circling its way around our house as well.

I actually have a post on my blog titled "I Heart Fever" for the very same reasons. My headstrong girl melts into a puddle of cuddle and easy parenting. So I get a little break... and feel guilty about it!

Dang, I wish I was at home with a sick Ezra, sounds like the perfect day. I mean except for the fever and not feeling well and whatnot.

I love that he compliments the hair of his caretaker when he's sick - he knows what side his bread is buttered on!

My little guy has the SAME blanky! only i 'm not smart like you and i only have ONE...should really get a backup.
I know exactly what you mean about kinda 'liking' the sick kid thing..when my big guy is sick it is the ONLY time he is still, snuggly, and not moving or talking quite so much ;) Still breaks my heart though...recovering from stomach bug here so all too familiar.

Oh, poor sweet little man. My little guy, who looks a lot like Ez now that I think about it, is the same way: cuddles, reading, stroking hair, touching.... It doesn't hurt that he's just so yummy. I almost feel guilty about taking advantage.

And the Wonderpets do make everything better.

I would feel worse saying I kind of adore my kids when they get all cuddly sick (for a limited time! and only if nothing is Actually Wrong!), except that on some level I sort of like being sick like that myself--the curl-up-with-the-Nyquil-and-forget-about-the-world sick, not the achy-can't-sleep-can't-breathe sick.

My oldest, normally the "easy" one, turns full-on drama queen when she's sick and it's no fun for anyone. The baby doesn't sleep when she's sick, so that is less than no fun. But my middle girl sounds just like Ezra. Brave little toaster is the perfect description! And when she can't keep up her normal whirlwind pace, I do enjoy the cuddles.

Exactly how I feel about my middle child being sick.

My older girl reacts as if I'm poisoning her with every dose of medicine, and spent hours last week denying that she had a fever even though her face was bright red and the thermometer said 102.7! If she feels bad, she'll make sure you feel just as. My younger girl, however, "soldiers" through most illnesses. A cuddle, a book and some cartoons are enough for her. Maybe ice cream, too:) Sometimes I feel guilty because she doesn't get quite as much attention when she is sick as my older, but she doesn't out and out demand it! Maybe it's the whole middle kid thing...

Absolutely!! While I hate it when my kids get sick, there is definitely something extra smoochy about them when they are. And when it's my "wild child" .... he turns into the most vulnerable, sweet, precious thing in the world. I think it's because he (and maybe Ezra?) was too busy in the everyday to cuddle for more than a second (he's 10 now so not much cuddling anymore...). And really, when you know that it's just a cold (or something equally innocuous) you can "enjoy" the perks that it brings.

Have fun sleeping and snuggling.

I used to love an occasional sick kid day, too. Stay home,(call in "sick kid" to work), cuddle on the couch, watch some princess movies and nap. My kind of day. Now that she's older she doesn't necessarily want the cuddles as much, but actually she's gotten pretty good at the sick treatment thing. She'll remember things I've forgotten that have worked for her in the past. *sniff, growing up. On the other hand - yay, I'm farther from the germs! ;-)

Oh,sweet boy. I have one just like this too (the other two are grumpy little sick things). And as long as it is just a run of the mill virus, nope I don't mind my sick little one cuddling on the couch with me all day at all. Not at all.

My baby is the same age as Ezra and is an angel sick baby too. I got to spend the whole weekend snuggling with him and was in HEAVEN!!!!

So gutwrenchingly miserably adorable. I want to scoop him up and hug him forever.

My five year old is sick today, and the thing is that he never stops moving. But when he's sick? He's STILL. And he's cuddly, and I can sit with him without wiggling and poking. I know it's not right, but I kind of like it.

He's my favorite all the time (because I CAN, dammit). Poor cute snuggle puddle.

Sick can be so sweet. Because they need us again.

awwww. Poor Ez. I hope the little dude feels better soon, but man, is he mighty adorable when he's got woe.

yes! yes!! me too! love my cuddly sickie. my daughter is pretty sweet anyway but when she's sick... she thinks mama cuddles and love fix everything. :) and SHE'S 13!!!!

Please help me to get pregnant…

When I was five I left my tooth under the pillow and the next morning it was still there, so I went to report the injustice to my dad. My dad looks at me, takes out his wallet and hands me a fiver. Scandalized, I asked why HE was giving me money that the TOOTH FAIRY was supposed to give because she's totally real right, Dad? RIGHT? and he looks at me and says, "I owed some cash to the tooth fairy. Now we're even". For years afterward I assumed my dad had some kind of mafia debt with the tooth fairy.

He is so sweet-hope he feels better soon. And I didn't post before but we botched the tooth fairy deal too. (Forgot not one, but two nights in a row). Also, while we were moving, might have exposed kept teeth to child. She didn't say anything, hoping she didn't see. Therapy is in our future. :(

I love me some Zah, I really do, but mostly I am taking comfort in other's parents failures to medicate their children without a fit od the screaming meemies. Because man, is my 5yo drama queen driving me crazy with that.

I love me some Zah, I really do, but mostly I am taking comfort in other's parents failures to medicate their children without a fit od the screaming meemies. Because man, is my 5yo drama queen driving me crazy with that.

I hope that he gets better soon. There is no fun in being sick

Awww, he is so precious! My little guy always tells me he loves "mommy hairs" too.

my first (and only...so far) is the same way. melts the heart. hope the sweet little man is up to his raucous self soon. but not too soon, cause his mama could use some snuggles.

Awww... I hope Ezra gets well soon. Those photos are so sweet!

Hello! I am glad to found this your site. Great stuff here. Thanks for sharing! :)

Ok, I have 4. I would LOVE to have just 1 kid react that way when they're sick. Instead, I get perpetual whining, argumentativeness, and just a load of unpleasant. I would do a celebratory dance to have a loving cuddly bundle like that if they were sick. No pearl gasping/clutching here.