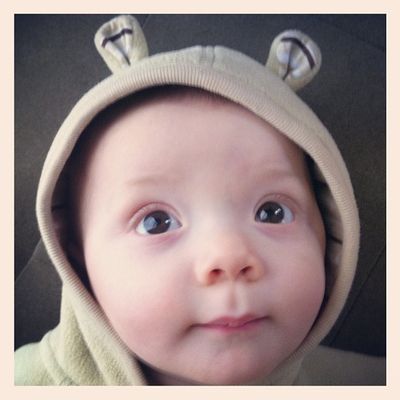 I posted this picture to Instagram a couple days ago, but I'm reusing it here because it's now the last-known photo of Ike without a ring of multi-colored bruises across his forehead. Which I'm guessing he'll be sporting for the next few months, at least. Oh my GOD, this child.

Last Thursday he started crawling on his hands and knees, pulling to a stand, making shaky (and mostly unsuccessful) attempts at cruising around the furniture, doing a combo wave/sign-for-milk thing with his hand and mimicking the words "kick kick kick" while, uh, kicking.

And I do mean, literally, Thursday. All of that. BOOM. I hadn't even lowered the crib mattress yet. I woke up with a little helpless baby and like, five hours later was the proud parent of a full-blown crazy person. Who is hellbent on injuring himself and/or eating random pieces of Scotch Tape he finds on the floor.

(Also: Mushrooms. Very big fan of sauteed mushrooms. Not such a fan of chewing the mushrooms, however, so every diaper change is like SURPRISE MISE EN PLACE!)

(That was gross and unnecessary, I'm sorry. It's just that Ike didn't seem to appreciate the cleverness of the mise en place joke and I guess I got a little huffy about getting the humor side-eye from someone whose butt I was currently wiping, and thus decided to inflict that terrible visual on y'all for validation purposes. Perhaps I'll try to work it into tomorrow's Top Chef recap as well. MOMMYBLOGGERS BE TALKING 'BOUT POOP ALL THE TIME YOU KNOW IT.)

(I could delete it, yes, but I'd have to come up with a better closing for this entry but Ezra just came out of his room wearing only his underwear and COVERED in ballpoint pen because LOOK I'M A TREASURE MAP, MOMMY. And indeed, there's an X on his belly and apparently some kind of sea monster on his left leg.)

(Seriously, where are my children getting their hands on all these stray office supplies, when I cannot find tape or pens or a goddamn paperclip to save my life? Jesus. Next time I feel the need to label some file folders I'm just gonna check everybody's pants first and go from there.)

You are so funny, I just kind of helplessly start giggling about halfway through your posts and by the time I'm at the end I'm full on laughing with tears coming out of my eyes. I can not even imagine what its like when you get together with friends and a bottle of wine.

I have 3 boys...ages 9,6 & 3. So. I feel you. Office supplies...immediately go check between the sofa cushions. That is where my boys have stashed all the pens/pencils..and PENS. Don't be like me and NOT check there, until a strange stain (that you think might be from the dog) starts spreading out from under the cushion. DONT. BE. LIKE. ME.

(Is anyone else seeing an ad for adult diapers in the sidebar? Because I am and it's frightening me a little bit. DAMN YOU GOOGLE KEYWORD NINJAS.)

:D just the chuckle I desperately needed. And yes, adult diapers here. The sidebar ads are often made more amusing by however the keywords go with whatever you actually wrote! Sometimes it's like a bad day on Mad Men.

:D just the chuckle I desperately needed. And yes, adult diapers here. The sidebar ads are often made more amusing by however the keywords go with whatever you actually wrote! Sometimes it's like a bad day on Mad Men.

Oh, and Clorox wipes. Google's suggestion for Ezra? Didn't google see the big "no baby" sign on the wipes? Which also goes with your previous content, actually....

My daughter is in this stage as well (though luckily she spaced it over a few days, not all in one. And also hasn't found the mushrooms yet. though she did get her grubby little hands on my banana bread this morning, and bam! half my breakfast was gone just like that) - this morning she was finally without a forehead bruise, so i anticipate a new one will bloom sometime in the next 24 hours...

Thanks for the laugh I needed today. :)

I hope I don't freak you out, but whenever I read one of your posts, I always think, 'I love you!'. So, I love you. You make me pee in my pants sometimes. But I still love you.

You should not be allowed to say such things, when I am drinking tea. Seriously. My poor, poor keyboard. Ack.

No adult diaper ads here for me... but there IS an ad for Goodnights and Chlorox wipes. Google freaks me out. The ads in Gmail are cray-zay.

And, most importantly... Oh, Ike. Give your Mama a break.

ezra picture please. i'm in desperate need of a treasure map... ESPECIALLY with an X on it!!!!

Poise Pads on the right sidebar.

I just love that picture of Ike. So adorable! So intact!

Also, am still waiting to hear the story of your super-seekrit spy mission to NY. The lack of room service can't be the only interesting thing that happened.

Haha bitches! Only cheesecake in the ads for me!

I've got ads for FoodBuzz and office supplies. FITTING.

Ike is so adorable. And so very INNOCENT looking. Very misleading, considering he is a cruising kick monster!

That's the hardest I've laughed in a long time. Thanks for that! :)

Also, he is the only one that I would consider worth losing a delicious Cadbury mini egg over.

This post was BRILLIANT!!! I know its the everyday reality of your life - but as a childless office drone; THANK YOU!!!

one time found the much needed stapler in the fridge, logical for a (then)3 year old and also found that the white envelopes weren't that white anymore. Cars and Cars and lego was doodled all around...

I laughed so very hard at the SURPRISE MISE EN PLACE and am so very grateful that I had swallowed my lemonade before reading that.

This was awesome and funny and thank you for the laugh and good luck with ninja kick baby.

Just beginning to child-proof the home. Its impossible. Everything is so hard and point. We're screwed!

can you check and see if one of them has our stapler, please? it went missing just in time for valentine's day crafts, and i'm betting Ezra has it squirreled away somewhere!

I found a piece of a plastic fork tine in Alex's diaper earlier this week.

That is all I have to say on the subject. Lord have mercy.

I may have to try Alex on some mushrooms. I just made lentil stew for him, but he dumped it out onto his tray and mostly just wanted to play with it. Sad.

This elicited the perfect number of giggles to get me through a tough afternoon with the kids. Thank you.

You have the cutest baby I've ever seen!

Bahaha! I almost made really weird noises while sitting at my desk and trying not to laugh. Thanks for that.

I hear ya! It is impossible to childproof a home for a toddler with a 7 yr old and 4 yr old in the mix. I had a personal bathroom emergency the other night when home alone with said toddler (not enough time to secure her, IYKWIM) and when I was done, I came out to find her eating chalk and covered in blue washable marker, which is in fact, not washable when scribbled on chubby hands, wrists and chins. Epic fail.

I hope you got pics of the treasure map!

Oh, there was more to that comment but it got eaten and now it looks way more obnoxious than it should. I am dying to know, though.

This week, I found a toy snake in the paper bags to be recycled, and my older son's pumpkin whistle in the kitchen aid mixer bowl (which is in a kitchen cabinet), both thanks to my 10-month-old. And since said 10-month-old only has 1.5 teeth, I TOTALLY get your mise en place joke. In fact, I get it multiple times a day.

I just want to say, THANK YOU. Whenever I am having a bad day seeing a new post on your blog immediately makes me smile....then reading it usually makes me pee my pants. So, yea thanks for that.

Yeah, my little guy turned seven months old on the 8th and in one weekend went from army-man crawling to full-fledged crawling, pulling up to a stand and cruising. Also talking. Big time talking. (Though he only says "Mama" if he's really in a tight place, the booger.) And he decided that same week would be a great time to sprout six more teeth AND go off his current formula, leading us scrambling to find something His Majesty would deign to eat.

Why can't they develop at a slow, steady rate so us old folks can keep up?

Ranch dressing and adult diapers, should I be worried if I'm getting hungry?

Don't feed Ike tomatoes like ones from garnish (cut up little cubes). Those are scary on the way out. You think something is wrong with the baby when you see a red dot in the diaper and then you realize...DAMN...TOMATOES

Yep. This is life with kids on a good day. You nailed it (as usual!)

Mine were both better than Hoovers. Screws in mouths, nightmare!!!

That is a very cute picture. I remember when my little boy was young and used to wear outfits like that.