It takes nine months to go from zygote to newborn. And things don't really slow down from there, no matter how much I would like them to, sometimes.

Actually, forget nine months, my head is still spinning over all the changes that have happened just in the past nine days. 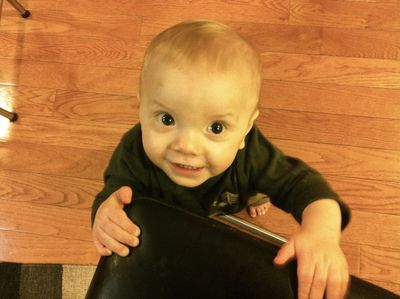 He is so proud of himself that I can almost ignore the bruises. 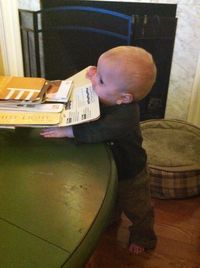 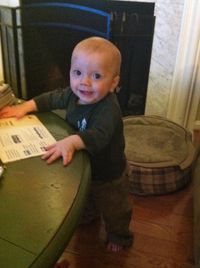 (Approximately 30 seconds later we were both VERY grateful for the strategically placed dog bed, however.)

He waves hi and signs "more" and is consistently mimicking a handful of words -- dada, kick, yum. Those chubby cheeks are the result of an appetite EXPLOSION, as he's suddenly eating everything under the sun with great enthusiasm, and in even greater quantities. He will always, always have some of what you're having, so please hand it over. (Especially if it's Indian food. That's my boy, and so very much the product of my non-stop pregnancy craving of saag paneer.)

He loves riding in the Ergo, bouncing in his jumper and listening to strangers freak out over the size of his giant saucer eyes. He hates diaper changes and injuring himself, even though both of those things seem to occur at least a dozen times a day. 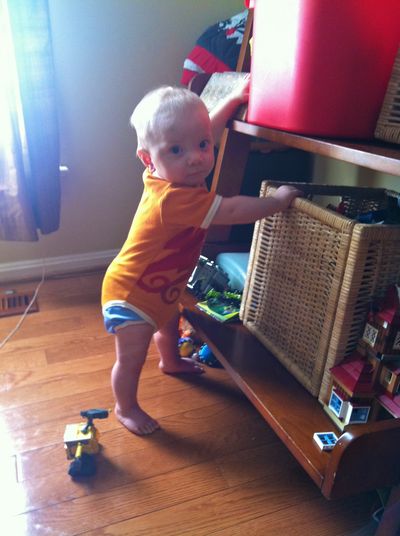 (Although thanks to this photo I now see the curtain-blinds-string-pull situation that I need to rectify, because THIS MOBILITY THING REALLY CAUGHT ME BY SURPRISE FOR SOME REASON.) 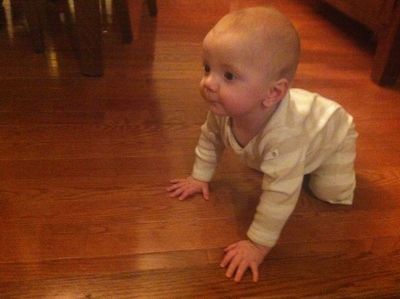 I'll tell you what, though: It never gets old, it never gets less amazing, the novelty of the rapid-fire milestones of the first year never wears off. 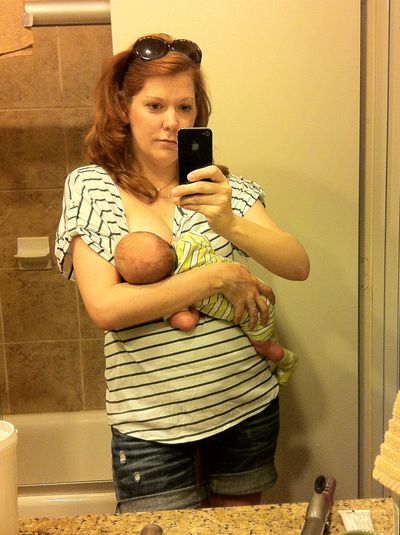 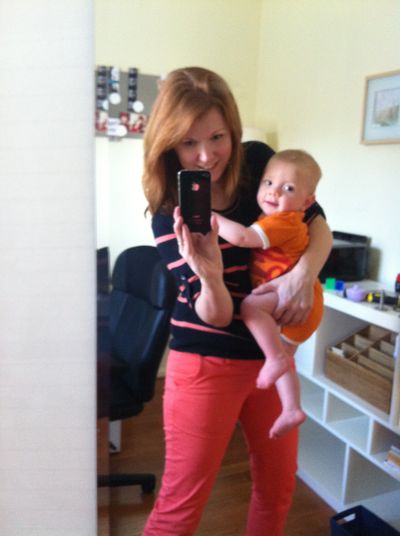 OMG, this post almost made me cry. My daughter just started kindergarten. Which means she'll be in school next year. SCHOOL.

I was pregnant like yesterday! With kids things change fast. Really fast. And it makes being a Mom ever so sad, but also exciting.

Amazing to see that joyful awareness in his eyes, him realising that his world is opening up.

It is amazing as they speed through all of lives transitions. My oldest will be 6 this month and it's insane how I am certain it was just yesterday we were nursing him back to health in Ethiopia as a tiny 4-month-old.

Why yes, yes he is amazing. As are his saucer eyes. They find the shit we forget to fix/put up/babyproof before we even remember WHO THE HELL BOUGHT MARBLES!

Also, thou weareth pink pants. Melikes. (I am saying this in an uncreepy, unpinkpantcaressingwereItoseeyouinperson kinda way. Unless of course, you wouldn't mind a little pink pant caressing...)

I love how devilishly happy he looks! He could not be more pleased with himself.

He is gorgeous! I love the look of a baby crawling...not so much the actual sneaky crawling/mobility, but the way they look so TINY...love.
Your hair IS great! And so are the pink/red pants.

I also am obsessed with your pink pants. Please tell me you got them at Target, because I really don't know how to shop anywhere else.

I just screamed "BABY IIIIIKKKKKEEE!!!" triumphantly. That is all.

Best. Reminder. Ever. That's what it's all about:)

I'll be 45 at the end of the month and pics. like this give me Baby Fever every time. I ask my 5 year old on a regular basis to let mama carry him. Just for a minute. Please... before you're taller than me.

Sounds like my number three is the same age as yours. My oldest is also ASD. Fun to see a lot of what's going on at my house reflected in your posts!

He's a cutie! And can I just also say how adorable YOU look in your last picture? And what a great outfit! :)

Aww Happy 9 months Baby Ike! I feel like you were just writing about his birth. He's so big!

While Ike is always adorable that outfit in the last picture is as well! So cute. Both of you

Where did that *person* come from? What happened to baby turtle? Also, I don't think you're allowed to have three children and also wear trendy jeans like that.

He is so cute...I don't know how you get anything done...don't you spend copious hours admiring his cuteness?

(all your kids, really...damn you too make gorgeous kids...)

TWO! You two make gorgeous kids...(although mine is pretty cute too).

Oh thanks, now I totally want a third. I can barely handle the two I've got.

I absolutely loved this.

Amy, you have the biggest talent for sharing your kids in such a way that we feel like we know them; that they are our kids too.

I feel such a genuine affection for each of your kids and all their strengths and their annoying bits and everything. Thanks for sharing them with us. Your family is priceless.

#2: Hagrid's hut? You mean your LEGO Harry Potter buildings are together? So impressed, woman.

#3: I wonder if you have a future sleepwalker on your hands. I wake up at least a few times a month to a child screaming his head off because he managed to get into the kitchen (in his sleep) at 3am.

@Kate HAH! You're in luck. The pants are totally from Target. Coral cropped/cuffed pants by Mossino. Sweater is from Piperlime.

But I can't really take credit for any of it because Jason picked them both out. The man missed his true calling as a personal shopper, I swear.

Can I just say that you look AMAZING in that last picture as you try and wrangle Ike. Awesome outfit, awesome hair (No evidence of Chia bangs) and you literally look about 23! I would know because I'm 19 and I think everyone over the age of 25 is OLLDDD

Seems like only a couple a weeks ago you were concerned because he couldn't stay sitting up!!

Love your babies, Amy, and your giant love for them.

That first year really does go by in a blink. It's also my favorite year. It's the year when they can't talk back. They love being loved on. Everything is new and amazing to them. The list just goes on. Thank you for sharing your journey with us. It's super special and sweet to get to see it.

Dang, you guys really do make some cute kids...

My little girl turned 11 months yesterday, it goes so fast!

Oh so, so cute! Happy 9 Month Birthday Ike! May you keep your parents ever surprised!

You look fabulous. I want that sweater.

Ike is, ofcourse, super cute too.

awesome! he's a character alright! i love those eyes, and they are very saucer like in their hugeness.
by the way, he's starting to look an awful lot like ezra in these photos!

This made my morning.

This made my morning.

Well this post was a happy addition to a busy day. I've always maintained that if adults had to do in a year what babies do in their first year of life, we'd throw in the towel right around day 3.

Sometimes I have to do a double-take when I realize that my now 12 year old is nearly taller than me. He walked at 10 months.....don't tell Ike!

"I absolutely loved this.

Amy, you have the biggest talent for sharing your kids in such a way that we feel like we know them; that they are our kids too.

I feel such a genuine affection for each of your kids and all their strengths and their annoying bits and everything. Thanks for sharing them with us. Your family is priceless."

Yes. Yes. And yes. Also, you almost made me cry.

so sweet. Happy 9 months Ike!
Your blog is like my what to expect reading. My Avery is about 5 weeks younger than Ike. I know no two babies are alike, but she seems to be running just behind Ike in so many milestones. I appreciate your previews :)

That child is seriously the cutest thing I've seen all day and I can say this because Cora is officially a toddler. OH, and excuse me, you look awesome. Those pants, that hair!

gah! he makes me want another baybeeeee and another baby is most certainly not in our plans. curse you and your saucer eyes and delicious baby thighs, Ike.

The cuteness quotient of your kids is off the chart!

You both are amazing! Love!

You have a beautiful baby! I had a "It goes so fast moment today". Even though my oldest is 6 and I've already done the whole "OMG he's so big now" every few weeks. I find its the same the 2nd go around.

With my new one (born January 4th)I was pretty good. He spent the first two weeks in the NICU with respiratory distress so I didn't think about it. Then we were so happy to have him home I didn't notice.

We brought him home in this blue hooded jacket, and today it was a bit chilly so I went to put this same jacket on him, this jacket that had swallowed him whole just weeks before and found it was almost too small. So I calmly took it off, set it aside, and burst into tears.

It is beautiful and sad and amazing all at the same time.