SO MUCH NON-STOP CRAZY EXCITEMENT 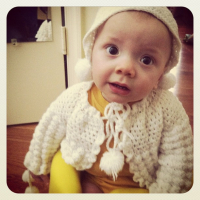 Oh my God, where to even START, you guys. 1) Jason went to the store and bought new, non-shitty plastic wrap. Just...like that. And he threw the old stuff out, like away, for good, even though we probably had enough to complain about for another five or six years. I opened the drawer yesterday and BOOM. Fucking Glad Clingwrap in the motherfucking house. I immediately started looking for things to wrap in plastic and even ran upstairs to find Jason because LOOK AT THIS BOWL. LOOK AT IT. It's so...sealed. This plastic wrap is so...clingy. Mmmmm, inappropriate. 2) The baby turned on the vacuum cleaner by himself. You know the kind with the button you can hit with your foot? That's the one. Anyway, he crawled up to it and smacked the button and the vaccuum roared to life and Ike must've belly-jumped back a full foot before looking at me, like HOLY SHIT I HAVE MADE EVERYTHING SO TERRIBLE ALL OF A SUDDEN. Afterwards he thought it was pretty funny, actually, and giggled about it for awhile. But not funny enough to do it again, apparently, so I could post a video of it on the Internet. Nine months... Read more →

Sponsored post ahoy! In which I talk about my underthings for money. What? Weird? A little? Whatever, there's free stuff for you at the end, so we can all be weird together. Mmmmm, creepy. My relationship with lingerie is...complicated. On the one hand, I am a 34-year-old woman who has been pregnant three times. Then hacked open for childbirth three times. I have breastfed three babies and eaten more than my fair share of leftover Halloween candy. I've fallen off the exercise wagon so many times I think it's circled back around and run me over, just for kicks. I am currently at my heaviest non-pregnancy weight, which is also technically slightly more than I weighed at nine months pregnant with Ike, thanks to an extended, shameful holiday love affair with ALL THE BAKED CARB-Y THINGS. Forget stressing about being naked and/or scantily clad -- these days, I spend enough time trying to look sufficiently non-muffin-topped and saggy while fully dressed. Stretch marks and cellulite? I can't even. I will deal with you later. (STRETCH MARKS: No worries! We'll still be here when you're ready.) (CELLULITE: Yep, totes not going anywhere either.) On the other hand: I have an awful... Read more → 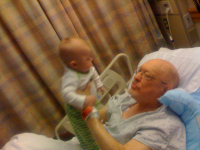 I didn't take many pictures of him. Even "before." I didn't take pictures of him because I kept thinking there was going be a different "after;" a better one than the one we got. He was always in the hospital, or stuck on the couch, or hooked up to oxygen, or with visible surgery scars, or bedridden upstairs, or in a hospital bed in the living room, or in hospice -- all stages in a process I could rush here and type thousands of words about, but could not bring myself to hold up a camera and snap a photo of. I could not bring myself to document those moments forever as the way things were, right then, because documenting them felt like admitting that things would not get better. That we would not get a chance to eventually take a photo without the hospital bed or the oxygen tank or the thin, pallid skin and bruises. People told me to take pictures. People told me right here, on this blog, in the comments, to take pictures. Right up until the end: Take pictures. Put the boys around him, put his hands on your belly, and take some damn pictures.... Read more →

It takes nine months to go from zygote to newborn. And things don't really slow down from there, no matter how much I would like them to, sometimes. Actually, forget nine months, my head is still spinning over all the changes that have happened just in the past nine days. After learning to pull to a stand in his crib (which he now does constantly, even in his sleep, so I occasionally have to go in and reposition a confused-as-hell, half-awake baby who doesn't understand why he's standing up or what he's supposed to do about it), yesterday marked learning to pull to a stand everywhere, anywhere, on everything, anything. He is so proud of himself that I can almost ignore the bruises. (Approximately 30 seconds later we were both VERY grateful for the strategically placed dog bed, however.) He waves hi and signs "more" and is consistently mimicking a handful of words -- dada, kick, yum. Those chubby cheeks are the result of an appetite EXPLOSION, as he's suddenly eating everything under the sun with great enthusiasm, and in even greater quantities. He will always, always have some of what you're having, so please hand it over. (Especially if... Read more →