Your Comprehensive Guide To Mornings With A 3.5 Year Old

First, it's a good thing three-and-a-half-year-olds aren't that big, because you will probably need to physically pull him out of bed. He will look like an adorable, sleepy cherub, and may even fold himself up into a tiny ball on your lap while he fights the waking-up process. Take a minute to enjoy it, because it's all downhill from here. Once the three-and-a-half-year-old is semi-halfway-awake, he will start whining about something: The fact that his Cheerios are not yet in his mouth, that he can't find the book he deliberately kicked under the bed last night, that you are SO GOING to bring him the wrong pair of underpants, HE JUST KNOWS IT ALREADY, etc. Pro Tip: You will indeed bring him the wrong pair of underpants, this is true. You are a negligent monster and the absolute worst. Once you have peeled his pajamas off and poured him into his clothes like a blob of limp-yet-resistant pasta — and navigated the treacherous Sock Drawer Of I Don't Like Those Socks, I Want The Imaginary Red Socks That I Do Not Own — it's time to make the first transition of the morning into the bathroom for potty and teeth-brushing.... Read more →

Good Christ, this week. It is almost over. Good riddance, week! Thanks for bringing us the Craigslist ad about the beards and the unicorns and all, but other than that? Go away. Fuck you. Since I spent the vast majority of my week either 1) cleaning puke off of various sufaces and a wide variety of fibers, OR 2) sitting at my desk staring at multiple laptops and like, flowcharting deliverable synergies and shit, I don't really have much to blog about. NOT THAT I'M GOING TO LET THAT STOP ME, OR ANYTHING. OH HO HO HELL NO. Instead, I'm going to mass-address some questions you guys have asked recently, either over email or in the comments, and I'm sorry for ignoring you in both of those places. I have an excuse, I swear. And it's that I'm a terrible person. QUESTION: Omg, did you see that video about the dad who recorded his son's special education teachers and discovered they were bullying him and saying awful things and... ANSWER: No. I mean. Yes. I wrote about the video at Babble. It's complicated. On the one hand, RIGHTEOUS FURY. On the other, I need to not watch things that will... Read more →

Another Day, Another Onslaught

At the risk of further cementing my place as your One-Stop Blog For Stories About Barfing*, I have little else to share today other than: Yes. Another stomach bug has been making the rounds among our little germbuckets. Last night it hit Baby Ike around 1 am, announcing itself with a TREMENDOUS splashy yawwwwwwp right as I walked into his room and felt something wet hit me in the knees and slide slowwwwwwly down to my feet. The morning after, annotated version: His crib was an unspeakable cage of horrors, as evidenced by the skinned musical seahorse — there's no hope in getting Ike to sleep without the thing, so I yanked the cover off and let him cuddle up with the battery pack. After much scrubbing and laundry and two or three dunks in the bathtub, I eventually resigned myself to a night sleeping upright in the rocking chair, with my torso covered in old beach towels and my arms draped with prefold diapers, while poor sweet Baby Ike fitfully slept on my chest and whimpered because Mom, That Really Sucked And I Did Not Like It, Let's Not Do That Again. He's absolutely fine now, by the way.... Read more → 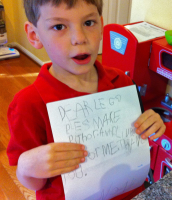 My child would like a word with you: Now, you'll be getting that letter personally in a few days, but I figured a heads' up might be helpful to let you know 1) that it was not sent by a serial killer and 2) what on God's green 16 x 32 baseplate it actually says. DEAR LEGO PLES MAKE PITHOR. AND DLIVR it For ME. THANC You. NOAH! Yes. So. You heard the boy. Get on that. His allowance is waiting. I think he can currently offer you three dollars for your trouble. I think I've mentioned that Noah's current all-consuming singular obsession du jour is Ninjago . Which, for the unitiated, is a line of Lego toys and a cartoon featuring...well,Lego toys. It's a carefully market-researched and deliberate mash-up of EVERY SINGLE THING little boys have been known to love over the past three decades. It's a Beyblade-Magic-the-Gathering-Samurai-Ninja-Star-Wars-Indiana-Jones-Meets-The-Voldemort-Mummy-Chosen-One Mystical Magical Land Powered By Martial Arts And Also Jetpacks. And since the entire universe exists for the express purpose of selling toys, it is completely unencumbered by things like logic, setting or making much sense at all. The ninjas live on a vaguely Asian-esque flying Viking ship (suggested retail price:... Read more →

Confession: For a week now, I've been living a double life. I'M HAVING AN AFFAIR WITH A WINDOWS MACHINE. No, not really. I'm actually having an affair with a CORPORATE CONSULTING GIG. Or...working on one. Is that what you call it? Werrrr...king? I don't know. I'm rusty. But I sense I should probably drop the affair talk and sex metaphors. And put on some pants. Before I accidentally broadcast something unsavory over that laptop's webcam and VPN. And it's entirely possible that I will do just that because I have absolutely NO IDEA HOW ANYTHING WORKS ON IT. Microsoft has up and changed everything since I last used Windows and it's making me feel quite old and feebleminded. I spent 10 minutes on Friday trying to find the Reply button in Outlook. And then another 15 minutes trying to bookmark a website in Internet Explorer. (Good thing I'm billing by the hour! HEY-YOOOO!) (Dear Employer: That was a joke. Please don't fire me.) Jason (after watching me type a web address in the search bar and a search term in the address bar for the 14th time in a row): Why don't you just install Chrome or FIrefox? Amy: But... Read more →

No Party, All Bullsh*t

Weeks like this should be illegal. It's been the kind of week where everything has been a kind of low-grade terrible. Just enough to annoy the shit out of you, but not dramatically terrible enough to give you interesting stories for your blog. But it's Friday! So...whatever. Here, I Wrote You Some Stuffs, Deal With It. 1) MOLARS ARE BULLSHIT Ike is cutting molars right now. Three of them, so far. His gums are a horrible blackish-purple color and he's cranky and congested and his sleep schedule is all kinds of jacked up. I am tired. I am running low on both Tylenol and wine. You know molars are a one-year thing, right? Most kids get them sometime around their first birthday? Usually on whatever day you've planned their birthday party? You know Ike is 10 MONTHS OLD, right? Why you gotta be in such a rush, son? Because freezer-burned yogurt melts are bullshit, Mother, and I would like to get going on some filet mignon instead. 2) PETS ARE BULLSHIT Max the Cat has been feeling a bit poorly as well, on and off. Trips to the vet confirm that there's nothing particularly wrong with him, other than being...well,... Read more →

After Noah learned to ride his bike sans training wheels, and after the trip to the toy store and the coveted Ninjago Lego Set Of Six Hundred Eighty Four Infernal Fucking Pieces Are You Kidding Me was procured and assembled, Noah calmly asked us to put his training wheels back on. Uh. Well, see, the point was... "I'M NEVER RIDING MY BIKE AGAIN," he shrieked, before I even finished the sentence. He may have stomped up the stairs and slammed his bedroom door, but I can't specifically recall if that was over the training wheel thing or any of the MILLIONS of hideous injustices his six-year-old self is forced to endure on a daily basis, including but not limited to: 1) not being allowed to watch TV 2) being told he really shouldn't wear that sweater, it's 80 degrees outside 3) YOU HAVE TO EAT ACTUAL FOOD SOMETIMES 4) AND GO TO BED 5) being told to bend over all the way to the ground to pick up the thing that he just dropped, I mean, MY GOD, he's tall for his age. It's like, three whole feet away, down there. YOU DO IT, MOM. He stuck to his stubborn... Read more → 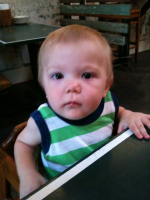 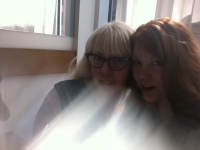 Hey! So anybody remember that little trip I took up to New York City, the one I wasn't allowed to tell you anything about at the time? And a few of you kept occasionally asking me just what in sam hill that was all about and I ignored you until y'all just gave up and stopped asking, because I WILL BREAK YOUR SPIRIT AND YOUR ATTENTION SPAN? Anybody? No? Excellent! Perfect time to bring it back up, then. So after all the secrecy and embargos and hush-hushness about it, I am thrilled to report that I have been cast as Marilyn Monroe in a new Broadway musicaHA HA JUST KIDDING. No, actually I went up to watch a commercial being filmed. A tequila commercial. Now, yes. Tequila and I have had a rocky relationship. We broke up in college and I've occasionally tried to make it work, we've been on but mostly off, because I KNOW tequila can be kind of a jerk but...he's so pretty! And tasty! And he goes so well with tacos! And so I allowed myself to be once again be seduced by the handsome rogue of tequila and convinced to run off and spend the... Read more →

Hey! So what's it really like having three boy children in your house, all the time, all on top of each other's business, and yours? What's it like trying to celebrate each individual child's accomplishments while simultaneously warding off jealousy, rivalry, fighting and GUYS PLEASE STOP THAT BEFORE SOMEONE STEPS ON THE BABY? This. This is what it's like.* Baby Ike Walking, A Play In Four Acts from amalah on Vimeo. *Which is to say: poorly lit, with inferior cinematography, and a soundtrack that could effectively double as birth control.** **Also, awesome. Though it helps to always have everybody in their pajamas so you can randomly decide to send them to bed at any given moment. I DON'T CARE THAT THE SUN IS STILL OUT, YOU'RE BEING TOO SCREAM-Y AND I'M TIRED. Read more →