I spent the morning in an Actual Office, where Actual Other People do Actual Work. Wearing Actual Clothes because they have also Actually Showered, because Actual Reality! It was so real, you guys.

A few observations and assorted tips for any fellow Work-At-Home Hobbits out there, contemplating a return to the corporate fishbowl:

1) Office furniture has not changed ONE BIT since the last time I sat in an office. Which was in 2006, and I'm pretty sure that there hadn't been any big innovations in the Dark Cherryesque Laminate Desk-and-Bookshelf world for a long time before that, either.

2) Office phones, however, are as terrifyingly complicated as ever. Pick it up, press 9 for an outside line, BEEP BEEP ERROR AUTHORIZATION NOT RECOGNIZED BEEP BEEP JUST USE YOUR CELL PHONE IDIOT.

3) I don't look nearly as skinny as I used to in elevator-door reflections. Sigh.

4) Always bring a back-up pen to a meeting. Mine ran out of ink about 10 minutes in and rather than admit that I needed a new pen, I sat there like it was the damn SATs, scribbling frantic circles all over the edges of my notepad in hopes of getting it to work again. My meeting notes look like half-formed chicken scratch interspersed with a series of tornados.

5) If you opt to wear a stiff, suit-like dress with a crossover design in the front, you might want to take it on a test-sit before going anywhere in it, on the off chance that a safety pin is required to keep it from gapping and showing everyone in the room your black lacy bra OH MY GOD. 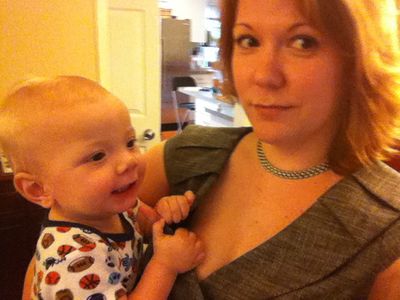 BABY IKE APPROVES OF THIS DRESS.

I hate cross over dresses. They ALL gap when I sit down. I've taken to just auto-sewing them with a hand-baste just so I don't have to deal with the shock at family gatherings.

Baby Ike approves anything that has you in it--dress, sunshine, shower !~! He's in love with his mama. Office workers scare me with their dress; we are still wearing cords and long-sleeved shirts here in the coldest section of the country no matter what time of year it is.

But at least you get coffee, right?

Yeah, I'm hoping to work in an office this summer for the first time in almost two years, and I'm a leeettle bit nervous about "what people do in an office." Great tips, esp. about the cross-over dress.

Ha. That's his kinda dress; screw those idiots who don't know the goodness within it. Wait, if it gapped, maybe they did know. Damn. Also, we have a notorious pen thief at work. All pens must be locked up if they're to see the following day. I don't lock the drawer for my purse (because that bitch is on E). I lock the drawer because I have been hit by the pen bandit (which inevitably leads to me using old pens from the bottom of my purse that dry out mid-meeting).

Did you get a haircut? LOVE.

Offices suck, which is why I am glad I work from home a lot.

I am sure that most of the people in the room approved of your rack. WAY more exciting than yet another Power Point presentation.

Check you out! Hope you had a great day!

How long is Baby Ike going to be Baby Ike? I'm picturing him at his wedding, being introduced as Mr. and Mrs. Baby Ike Storch.

y'know? I kinda want to see better photos of both the dress and the haircut. 'Cos they *look* gorgeous.

Yeah, it's imperative in any office to find what female co-worker has the advil, safety-pins, feminine products, chocolate stash. It's not always the same lady; but every office I've worked in has a stash somewhere of all these things. (In a pinch, a small binder clip on the inside can keep a cross-over from showing the Maguffys)

I consult here and there and teach part-time at a local university. When I went in with my giant "I have an eight week old who nurses around the clock" boobs, I couldn't find a single top that didn't make me look like I was trying to show it all off. Of course, I'm fat.

You look beautiful! I hope it was a fun, rewarding, interesting and that you enjoyed yourself.

You're a brave lady, wading back into the corporate fishbowl like that!

Don't forget to check your shoulders for drool/snot/food/puke.....not that i have any experience with this.

I hate that too - my boobs pop out (or my bra shows, way less dramatic) and I'm like heyyyyyy at least they look good?

i keep thinking that once these babies are born i'll have to invest in only turtle necks if i'm ever to hold them outside of the house....

So, I must know, did you give in and take your nose ring out?

Why was this picture taken while standing?

The picture is adorable. I'm laughing looking at my complicated phone and cherieesue desk, credenza , and book shelf.