Home Archives About Subscribe Advice Smackdown Tip Jar
Naps Are Wasted On The Young, Part Two
20 Things Nobody Told Me About Little Boys

So part of the sponsorship dealie thing with Sauza (who I refer to in real life as simply TEQUEEEEEEEELA, because we're close) included the assignment to have an actual Ladies' Night In.

OH. IF WE MUST. How could I resist these eyes? <-- Click that and then guess which set of eyes I am talking about. GO ON GUESS.

However, because I am no fool, I invited my favorite lady AND her non-lady significant other, because I knew he would bring dessert. Specifically, cupcakes for the kids and macarons for me. (He did not let me down.)

Since Jason and I have never met a party theme we didn't enjoy beating into the ground, we decided a Sauzarita party called for a taco bar, complete with homemade guacamole and salsa. We also decided that Tracey and Charlie were about fourteen different people: 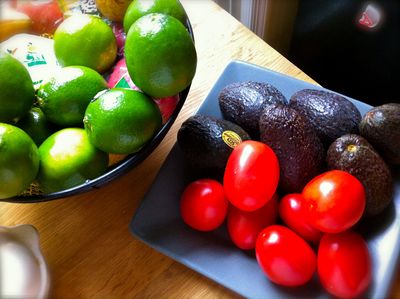 HEY YEAH WE BOUGHT ALL THE LIMES, TOMATOES AND AVOCADOS IN THE WORLD THERE ARE NONE LEFT NOW SORRY BYE. 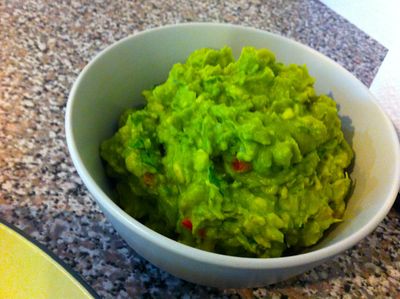 We ate all of this. (Ezra helped.) 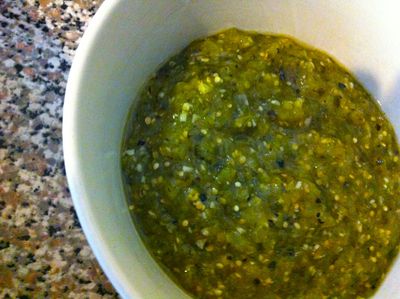 And this. Jason made homemade roasted tomatillo salsa (recipe here) and I encourage everyone on earth to follow suit. It will change your life and probably cure at least some of your diseases.

I mean, not to oversell it or anything. 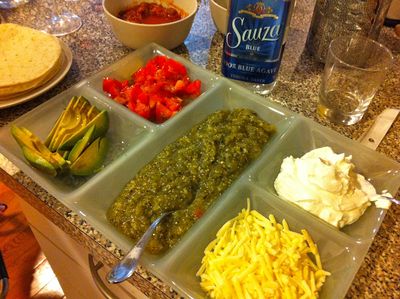 We made carnitas. Fine, Jason made carnitas (a hybrid-mash-up of these two recipes). Just like Charlie made the dessert. I made...uh. I...vacuuming motions with the vacuum?

(What? We were simply upholding the spirit of the Sauza "Make It With A Fireman" campaign, which is all about getting hot men to make you things, like drinks and tacos and cookies.)

We did indeed make a batch of the Sauzaritas, as demonstrated in the commercial. I had a handy cheat sheet on my phone from my day on the set: 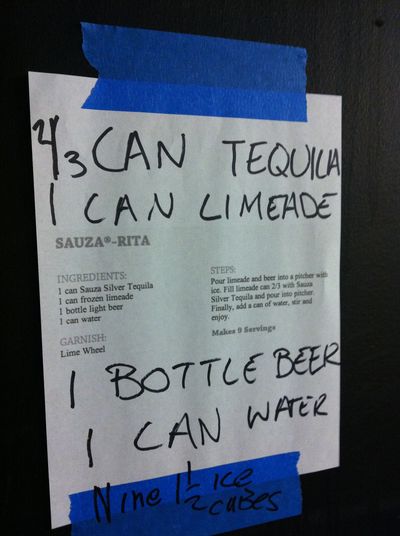 Other than having completely non-regulation ice cubes, it turned out pretty delicious. Except that we drank them before anyone remembered to take a picture. Oops.

Now it wouldn't be a TEQUEEEEEEEELA party without someone exhibiting some questionable judgment, which for us manifested in Tracey having the brilliant idea to create a NEW drink recipe. And Jason seizing on the opportunity to open a champagne bottle with the back of a knife. (Remember when we learned to that? Yes. Still doing that.) 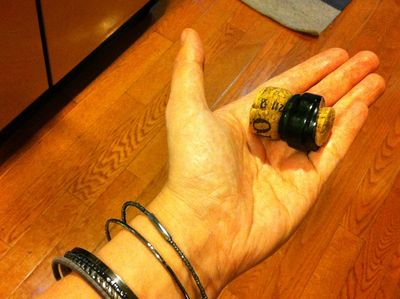 (Please to note that all children were fed and tucked away in bed by this point, away from our terrible collective influence and reckless use of cutlery.)

So that's how...this was created. An unholy combination of tequila and prosecco and...Stevia? I think? I don't actually remember what all they put in it because I was too busy shrieking that I wanted no part of this abomination. NO PART. 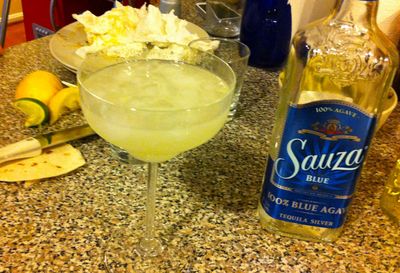 WHAT HAS SCIENCE DONE? 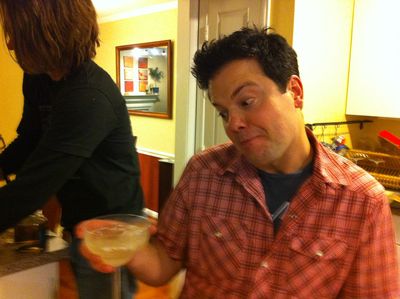 This is Jason's "well it's not as bad as it could be" face. 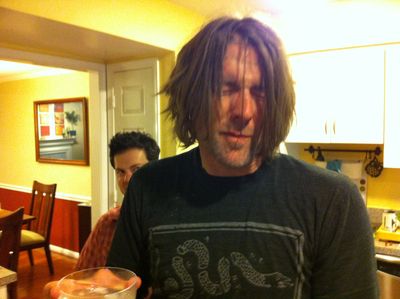 And this is Charlie's "no, it actually totally is" face.

Yeeeeah. I recommend you stick with the recipes the Tequila Professionals come up with. But whatever, it was time to switch to coffee anyway, because we were all sinking into Tequila and Taco Comas and still wanted to watch Team America: World Police together and... 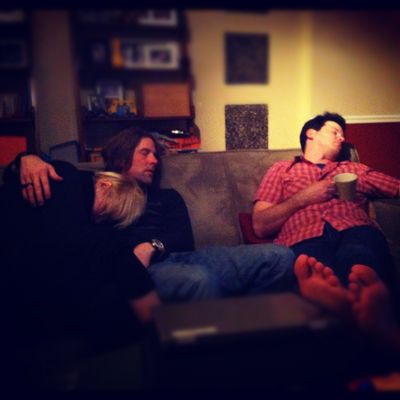 8:30 pm. NOW THAT'S A PARTY. Next time someone remind me to buy some Sharpies along with the limes.

This post is sponsored by Sauza and the (hilarious) "Make It With A Fireman" campaign. Please drink responsibly and avoid putting prosecco in your tequila, because ick.

That last photo is cry-laff inducing. God, we suck.

Thanks a lot Amy. Now I'm craving tacos and margaritas and I have the stuff for neither at home. In fact I was making baked beans for dinner tonight. That has to be like, the polar opposite of yummy Mexican food. Damn, I really effing want some tacos now. Sigh. To grocery store on the way home I guess. :)

That salsa looks delicious.. might have to try it.

Is the Sauza thing done, then?

So yeah, asshole that I am, thought the damn commercial was to be read after a certain about of tequeeeeeela as imbibed as in: I can bottle beer, I can water. Hire me for the next party. Clearly.

And now I'm hungry. Is it wrong that my kids like guac and I brought the makings to work with me so that I wouldn't have to share? And then coworkers asked if I also had chips and I had to say for me, yes (implying: bitches, please).

You guys can out party me. Except I'd at least dance on the coffee table.

It's not a party until all attendees have fallen asleep on the couch. That's my story and I'm sticking to it.

Matthew and I went on an afternoon wine tour yesterday, and then out for dinner and drinks, and then I fell asleep on the couch at 8:30. \m/

Now I want tacos and tequila.

I so wished I lived near you! I'd be your friend just to be invited to a party like that! And that's the 1st picture I've seen of your husband. And boy...do your boys look like him!! (Bet you never heard that one before have you!!?)

I have tried all manner of stevia/hooch combinations and it always results in awfulness.

I don't drink, but you've got me wanting guacamole big time.

I don't usually comment on these, but what the heck, i just LOLed at work and i probably shouldn't be reading blogs at work... anyway THANK YOU! I am glad my husband and I aren't the only grownups completely passed out at a time we would have previously just been leaving for dinner. Amy, i love your blog and thank you for making me feel less like a horrible mother for most everything from sleep to food to nursing (still hanging in there). Thank you.

This post is utter bullshit. Picture this. I'm at work, reading along looking at delicious pictures of guacamole and salsa and liquor AND I HAVE NONE OF IT. Now I'm starving (I have no lunch), and I have no tequila and no avocados, and no pretty little taco tray thingy that holds all of the condiments in a way the the tomatoes won't run into the onions and lettuce and make it all wet and DAMMIT I HATE THIS POST BECAUSE I'LL ADMIT IT, I'M SO DAMN JEALOUS OF ALL THE GOODNESS THAT TOOK PLACE THERE.. I'm going to find some ketchup packets to eat in the office here....phooey!

Oh wait, I clicked all of the links and had to see the desserts. Spirit crushed!

Okay, this is making me a little weepy. I MISS good mexican food so much! I will also admit that tomatillos totally intimidate me but I would love to try that recipe. If I could actually get tomatillos here. No such luck.

You so need to a can of Sprite.

Universal mixer and all. This is one of my favorite recipes.

I am very jealous of everything you ate and drank, except maybe that prosecco one.

I wanted to make macarons this weekend but couldn't find almond flour anywhere in Frederick. My hippie food co-op has flours made from gains I've never heard of, but not almond flour :(

Also, now that I know you can make Chipotle carnitas at home, I must learn how.

I love this post! Looks like a good time. And no WONDER I couldn't find any tomatoes!

i can't believe how much i took spicy foods and alcohol for granted before i got pregnant. *whine* WANT!!!

I loves the aftermath. The beforemath looked pretty damned great, too, I must say.

I think that movie is funny too. So, so wrong, but funny anyway.

They totally want to break into the Australian market don't they. In which case they really need a food and booze blogger to showcase their fine product? I'm in.

I have to thank you for that last photo. It's nice to know that we're not the only one's who have parties that go like that. And I will definitely be keeping my prosecco far far away from my tequila. Very wise words.

I know you put a lot of effort into this party and the following post but I'd just like to say that Taco Town is one of my favorite SNL skits of all time and I was very excited to see it in there!! Thank You!!!

"OH. IF WE MUST. How could I resist these eyes? <-- Click that and then guess which set of eyes I am talking about. GO ON GUESS."

Guess which one I'M talking about? ;)

This is wrong. Seriously. I live in Jordan (in the middle east, next to Iraq and Syria). it's hard enough to find tequila here - though it can be done! - but tomatillos are impossible. They don't exist. So now, I have all of these pictures of food that I'm not going to be able to eat until I get back to the States in approximately forever. And now I am hungry.

Thanks. Thanks a lot.

I had the same thought as Arnebya, and thought your page said "I can tequila, I can beer" too, and I didn't figure it out until I read I bottle beer and realized I should probably not be teaching children how to read in the first place.

This post inspired me to make carnitas - the pork is in the oven now! I'm so excited and will try not to eat it all before my husband gets home. I've never been the biggest fan of tomatillo salsa, but that looks good. And someday when I'm not low-carbing it I might have to try those Sauzaritas.

Beergaritas! My husband is going to be seriously disappointed that he isn't the beer-margarita pioneer that he thought he was.

You MUST! I meant it! MUST! Try Tequila shots with orange slices!!! DO it!!! I dare you!! Soooooooo Goooood!!! You'll thank me. You really will.

As much as I Iove this entire post, aside from the kick-ass recipes (hi, tequila makers!), my favorite part was Jason's bracelets. Really cool stuff! Okay, and, I may have shared this post via email, giving credit to your blog complete with web address, because that last picture. Freaking priceless. Soooo get that. Party like its 7:59 indeed. Growing older is not for sissies. Especially for people with three boys under ten. Just reading your blog makes me tired! You are awesome and I way so very much heart you. And the fantastic fandamly.