Home Archives About Subscribe Advice Smackdown Tip Jar
It's No Leg Lamp, But...
The Inbox & I

Two things I have been trying (and failing) to get on video for the past five days for you people (and also posterity and stuff):

1) Baby Ike saying "uh oh!" This is his newest trick, and he loves it and it's adorrrrrrrable and etc. He says it constantly, but most often during the 30 seconds I've decided to turn my back on him, just for the added thrill of wondering if he's using it in the correct context this time because he's...yes, he's knocked over the Lego bin/my coffee/the pets' water dish. Faaaantastic. Uh-oh, indeed.

But the minute I stick the camera in his face he goes all serious and looks away, and I can practically SEE his little brain trying to figure out how to roll his eyeballs at me. So I've mostly ended up with a lot of stinkeye footage with a LOOK AT MAH BUTT finale.

Yesterday, in the car, he joined in a singalong of Karmin's Brokenhearted (SHUT UP JUST SHUT UP), mimicking the "UH OHHHH" lyrics perfectly. I was delighted and put the song on repeat (DON'T YOU JUDGE MEEEE) so he would do it again and again, but then questioned the wisdom of this once Noah was all, "let's get up let's get on it" and then asked that I switch to the "Cookie Monster Song" which is actually Call Me Maybe (thanks to this video) and you know what? Let's just stop talking about the contents of my iPod already, okay? Let's just...stop. 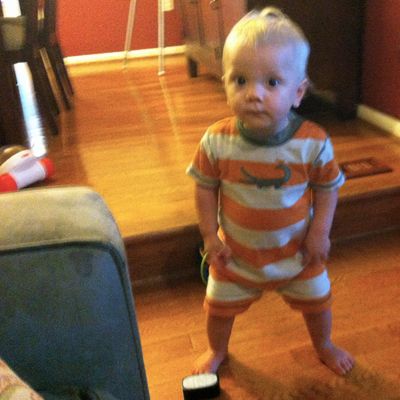 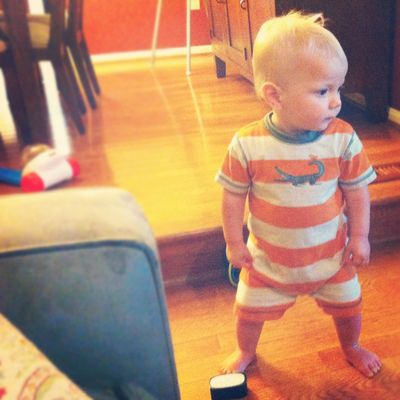 Okay, so I know he's technically just standing in these photos, but he IS walking. He took his first steps on Saturday, and we had witnesses and everything. It happened. It was real. And exceedingly wobbly.

(BTW, the sign that someone has definitely crossed the bridge of friendship into familyhood: When YOUR baby takes his first steps and SHE bursts into tears over it.)

I have yet to capture it on video, other than the one time he started to walk towards me and the camera and promptly fell headfirst onto the floor. With a brief yet spectacular collision with the coffee table on the way down. (THAT'S ONE FOR THE BIRTHDAY MONTAGE.)

I can't yet tell if his motivations are related to wanting to join his big brothers, or more of the I-need-to-get-myself-away-from-these-people variety. 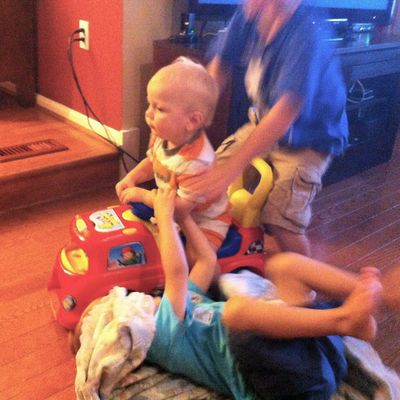 Either way, shit just got real up in here. More real. Reallier real. Time to make good on my secret dreamy-dream to live in an oversized yurt furnished with nothing but upholstered ottomans.

My baby is 9 1/2 and is still referred to as the baby. He's also still regularly called Natesy (his name is Nathan) by myself and his sisters. Luckily he's still okay with it. I have a feeling he'll be Baby Ike (at least in your head) for a very long time.

My dad called me "Baby Cara" until he passed away last month. I'm 37. So there's that.

I still call my 10-year-old "the baby" so whatever. I had forgotten how exciting first steps are. It was so cool to see.

My two and a half year old is still 'the baby' even though he's edging dangerously into preschool age and I can't even fool myself he's a toddler anymore. It kills me.

My baby is about to turn one...I am getting these "oh, my baby is so big" moments.

Baby Ike 4 EVAH (I am so holding up 4 fingers in a broken wannabe West Si-eeed tribute). Oh, baby Ike, if you knew just how much the weird outside world unapologetically and probably borderline crazily loved you. Give us us uh-oh! Give us us walkage video!

And your iPod. Amy. Amy Amy Amy. It's ok. You aren't unfit until you realize your 2 yr old likes to sing the uh-oh part of Usher's Oh My Gosh (God?) to the beat so you let it play again and again because yes, you actually do secretly like to dance to it alone in the kitchen but it's not so cute when the 8 yr old sings way too emphatically Honey got a booty like pow, pow, pow. Honey got some boobies like wow, oh, wow. That's a no on cute for $500, Alex.

Our two youngest (ages eight and nine) are still called "the babies". I think for my hubs, the 17 year old and me, they'll always be the babies.

If you stop calling him Baby Ike I will cry.

Of course he's still Baby Ike. He'll always be Baby Ike. I'm not even sure how the world got along before without a Baby Ike.

Yay Baby Ike! I love that squat stance he has when he's standing. Too cute!

Oh and I wanted to add that my 3 year old daughter learned Selena Gomez' "My love is like a love song baby" at preschool. PRESCHOOL!!! And then demanded to see the "movie" of it, because she equates all songs with being on YouTube. My husband promptly changed it to some classic songs, but still...

"Uh-oh" is awesome because it can refer to knocking over blocks OR a multi-car collision. The suspense gets me every time!

Re inappropriate lyrics: Johnny Cash songs are great for regulating a kid on the spectrum but not so cool when you have to explain why he shot a man just to watch him die. Thanks OT guy for THAT suggestion.

You need to photoshop a surfboard under that child stat!

When he's a teenager I'll still be calling him Baby Ike. I'm gonna be his favoritest Aunt EVAR!

I still call my 2.5 year old daughter my baby. And she corrects me and says, "No. Yittle girl." And soon, she'll be my big girl. Commiserating with your sadness.

Confession - I'm a big geek and our new baby is Ike, too. Half for Newton, half because your Baby Ike is so freaking cute. Oh, and the third half (shh) is because his dad's name is Mike, so...yeah. Mike & Ike. We did that. Maybe geek isn't the right word for me. Being named Amy myself (and my bff from way back even calls me Amela - same pronunciation as Amalah) I sort of feel like we name-plagiarized you, though I hope that's not actually a thing. Wow, this just sounds creepier and creepier. Anyway, my point was that when our Baby Ike is no longer really a baby I think he'll end up being Sir Isaac. Please try it out if you like it and think it might fit, since I'm over here name stalking you and all. High five to Baby Ike - may his bruises be few and he turn into a ham for the camera for you!

My best friend's youngest brother has been "Baby Matthew" for about 39 years now.

How sweet. And bittersweet. It's so hard, their growing up and being able to walk away from you. My baby Levi is saying uh-oh too, so cute, in a very sad voice. Hope you can get Ike on video soon.

Ah yes, the questionable lyrics of popular music...to which I subject my almost-3 and 5.5 year old regularly. And now there are request to turn! it! up! Though I will not oblige for Usher's 'Scream'. I'm not that deaf yet.

And he will be Baby Ike forever and ever amen!

"Realier real" is awesome - I'm stealing it :) My youngest is Rory to my husband and me but Babyrory to his brother (do NOT try to tell him those are two separate words). I've been wondering, too, how long the "baby" will remain. Probably until there is another baby, which... not sure if that's a good enough reason to have another baby!

Gosh! That baby is stinkin' adorable! Bet you can't ever hear enough of that :).

All three are upright and ambulatory now? You have my deepest sympathy! Time to have another? (You do make the most adorable babies I've ever seen, and it would be a shame if you didn't have at least a dozen!)

What a super-fun houseful of boys!

My youngest is 2.5. She is still and always will be Baby Zoe.

It's the hair! When did the bald(ish) baby get the hair?!?! Baby Ike always!

and promptly fell headfirst onto the floor. With a brief yet spectacular collision with the coffee table on the way down. (THAT'S ONE FOR THE BIRTHDAY MONTAGE. OK - Amalah, I'm back. Cannot resist this type of creative expression. AND>... it may be Baby IKE 4-EVAH, but my brain read baby IKEA for evah!! LOL

On his ninth birthday, my son told me that it was OK if I still called him "Baby".