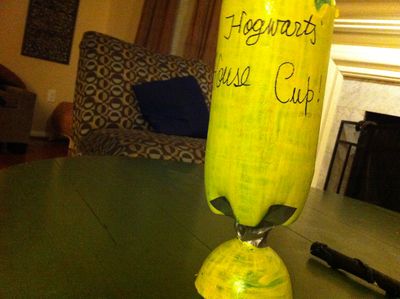 Why yes, that IS a repurposed Sprite bottle painted neon yellow and held together with duct tape Hogwarts House Cup. (Exclamation Point!) Noah won it at Harry Potter Camp, which is an actual thing our YMCA actually offers every summer.

"A thing" is as detailed of a description as I can offer, because I have no idea what actually went on at Harry Potter Camp. There was a sorting ceremony, though from what I gather only about four children consented to being in any house but Gryffindor and the sorting hat was maaaaaaybe kind of a pussy about it and gave in. They played quidditch and Noah also came home with a "textbook" that contains two recipes: One for "DRAUGHT OF DEATH" and one for a love potion.

I don't know. It's the YMCA. Seems legit, right?

Anyway, Noah was very upset during the last couple days at camp because Gryffindor was losing the House Cup contest to Ravenclaw. (Teams gained points by completing advanced wizardry moves like "put on you listening ears" and "don't hit people, you guys.") (So obviously those four little teacher-pleasing Ravenclaw brown-nosers did great, AM I RIGHT?)

But in the end, Gryffindor pulled ahead and claimed the House Cup on the very last day, and for reasons that I am not 100% clear on, Noah was permitted to take the actual cup home with him. He claims to have simply been the best behaved that day and singled out for his general awesomeness, a boast that I'm ashamed to have maaaaaybe doubted a little and countered with some leading questioning of the 1) are you sure they didn't just give one to everybody type, followed by the 2) omg, did my kid steal the Hogwarts House Cup variety.

I think what actually happened was a very, very kindly camp counselor who decided to bestow the cup on the kid she sensed it meant the very most to. 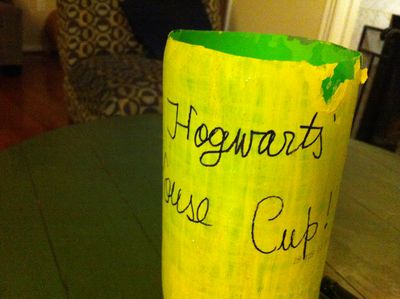 Who knew there were real-life wizards and witches staffing Y summer camps these days?

I...I find myself oddly jealous of Noah's prize. Damn it.

How awesome is that! It's not every day that you win a major award after all.

Our community college offered a HP camp as well. Each kid got a tiny little trophy (cause everyone wins - yeah!). They did come up with another idea for the houses, though. They sorted the kids into groups 1,2,3 and 4 and made them come up with their own names. It encouraged creativity which was nice and kept the kids from killing each other.

That is super sweet he got to bring it home. Maybe he got it for being the very best quidditch player?

That is so very cool.
Congratulations to your little wizard!

sounds like a fabulous daycamp experience. wow. what strides for your little noah!

Congrats on being in possession of such a valuable prize!

Ah, that we could all be so jazzed about receiving an empty painted piece of recycling...

I cried. I'm such a sap for awesome camp counselors like that.

I am also Emailing my kids summer camp director to DEMAND that we do this next summer.

I'm still pouting because the Pottermore website sorted me into Slytherin. So, I feel those campers pain. I do.

I am the queen of "are you sure you won?" comment - my kid won a national award - given to only ten kids across the US - and I was all like, are you SURE? I mean, REALLY? Mom fail.

Ok, that made me cry. But in an awesome way. That's cool for Noah!

Awesomeness!! Yeah Noah!!! I am pea green with envy. I want to go next summer!

I - for seriously - JUST finished reading all of the HP books for the first time ever. And am JUST NOW watching the movies for the first time ever so I a total HP fan girl geek right now. I would totally sign up for HP camp at the Y. I keep trying to convince my husband that we need to go to Orlando because we NEED to get our son fitted for a wand. (He is not quite 2 yet, but it is totally FOR HIM, NOT ME!)

I'd love to make a comment like "At least he wasn't Hufflepuff!" But that's probably "frowned upon" and I'd be banned from YMCA Potter-Camp before I was even accepted.

We're doing a Harry Potter camp at the end of the Summer. Thank you for showing this, because I didn't know how I was going to make the house cup. What an awesome solution. Totally stealing it. And NO, Noah won it because he put on his listening ears and didn't hit people. He's the awesome-est!

That!is!AWESOME! HP geek for 13 years here. Just love that Noah had this experience!

That!is!AWESOME! HP geek for 13 years here. Just love that Noah had this experience!

I want a house cup too! I am so happy for Noah!!

I'm laughing at the comments! That is quite the treasure...good for Noah!

I totally want to go to Harry Potter camp!!! And I can't wait until my sons are old enough to go...I'm so glad I know it exists now--yippee! And way to go Noah!

It's a major award!

I taught at a Wizard School (We were afraid to actually use real Harry Potter language, for fear of lawsuits. (I once worked at a zoo that did a life-size animated dinosaur exhibit called Jurassic Jungle, and Universal Studios threatened to sue us. Since when is the Jurassic Period copywritten?)) and it was awesome. I played the part of the Potions teacher and we made all kinds of crazy concoctions and explosive devices. My favorite: dragon eggs (Mentos) need to be neutralized in the tears of some mythical beast that I can't remember (Diet Sprite). But oops! Something went terribly wrong and there was a violent explosion! Now we have to protect ourselves from angry baby dragons! Ah.. good times. :)