I posted a (filtered-up-to-hell) version of this picture on Instagram a couple days ago, and the response was almost unanimous: When did that three year old eat your baby, Amy? 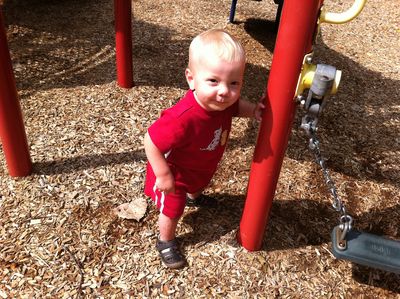 I wish I could tell you it was a fluke-y trick of the light or angle, but no. Baby Ike is not really looking super babyish these days. He's a tall, solid, smirky little thing who looks like I put two parts Noah and one part Ezra in a cocktail shaker and bam: straight-up toddler. 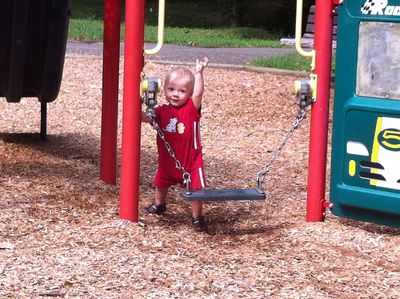 Well, pre-toddler, technically, since he's only taken a small handful of tentative half-steps so far. He's very good at standing unassisted and clapping for himself, but for actual forward propulsion he still prefers dropping back to his knees and speed-crawling all over the place.

I kind of don't blame him. He's crazy fast that way, plus there's less of a chance of falling and getting his teeth lodged in the outside part of his face. 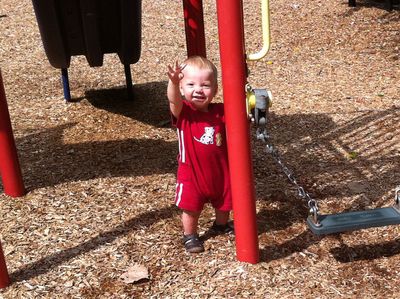 The mouthful of teeth aren't helping in the 13-months-going-on-36 looks department either. His canines cut through last weekend — all four of them, bringing his total tooth-count up to 16. SIXTEEN TEETH. At this rate his "two-year molars" will show up in September, and we should plan on getting his wisdom teeth pulled by kindergarten.

He enjoys watermelon, strawberries, pasta, cheese, chicken, grilled summer vegetables and steak. Not a big sweets fan, other than fruit, but he'll gamely give anything you're eating a try, by which I mean he'll get a crazy look in his eyes and wave his arms around while shrieking EAT? EAT? EAT! until you share. 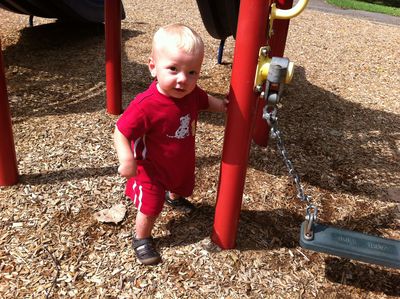 His big brothers adore him, and show a lot more patience with him than they do for each other, even as Ike gets bigger, taller and Lego-grabbier.

I look at him now and the reality of THREE BOYS is hitting me more and more (and harder and harder) each day — it's not one boy, one toddler and one little baby. It's three children, all hurtling forward towards full-on boyhood at lightning speed. Wrestling, wrastling, shrieking, fighting, destroying, laughing. All the time. Constantly. And then some more.

That's not a bad thing — in many ways I'm a little relieved to see the end of the baby days in sight, and plan to enjoy the hell out of the next stage before we hit (oh God) teenagerhood — but oh, Baby Ike. I'll miss you most of all. 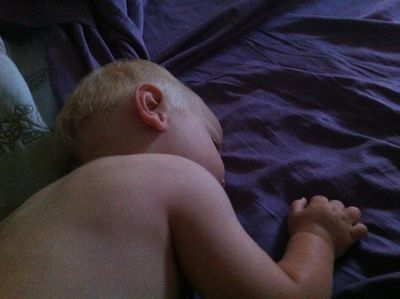 Thanks for slowing down every once in awhile, though.

AH the sleeping picture! Stop - I can't take it!

I was momentarily taken aback by the idea of Baby Ike saying words, because, you know, baby. I would love to know what words he knows already. Has he said 'Star Wars' yet? ;)

Tearing up a little because this hits so close to home. My "baby" is almost 2 1/2, going on 20. He gives us teenaged attitude ("ok, ok, fine" when he doesn't intend to imply) and his tween brother gives us the mood swings, so it's a scary preview of the coming teen years.

But then he falls asleep and cuddles into me and I can remember he's still my sweet baby.

My boyfriend has 3 boys -- 10, 8, and 6. I want to say something more, but I think you can imagine everything I could possibly say.

Matt is 16 months...and aside from talking coherently, he is developing way too fast. He is running wildly and destroying everything he can reach. I am loving and hating it all at the same time. SLOW down child! Why rush away the "baby"!

He does look right damn big at that angle. And Eat? Eat? Eat! is hilarious (and much more efficient than when Zaid would simply walk up on you as you ate, open his mouth wide and point like bitch I'm miming, reward me.

I so get this. All of it. I also have three boys! Aidan is 8, Quinn is 6 and Brannon is 2. They amaze me every single day. And sometimes not in the best of ways. But still, the joy I feel in being their mama? There are no words. I try to remember that it goes by so unbelievably fast and to just enjoy the utter chaos that comes with having three boys because one day they will grow up and my once noisy home will be silent. And that is something I am NOT at all prepared for.

I so get this. All of it. I also have three boys! Aidan is 8, Quinn is 6 and Brannon is 2. They amaze me every single day. And sometimes not in the best of ways. But still, the joy I feel in being their mama? There are no words. I try to remember that it goes by so unbelievably fast and to just enjoy the utter chaos that comes with having three boys because one day they will grow up and my once noisy home will be silent. And that is something I am NOT at all prepared for.

J is just a wee bit younger than Ike, and as he is my first, I'm just getting to that wistful sigh phase. He's so close to walking, and though he isn't entirely talking yet, I know it's going to happen OVERNIGHT. God, Ike looks so much like a little boy! Maybe it's the shoes? Whenever we put shoes on J, it somehow transforms him into a little toddler instead of my preshus baybeeeee....

I'm torn between being SO. DAMN. GLAD. I am done with the baby stage and missing it so much. It doesn't help that both my kids were SUPER adorable babies!

Apparently most of the barely-no-longer-babies in my social circle are not in a hurry to walk much. huh.

I had the same realization about my 14 (shoot, 15!) month old this week. She is no longer a baby - decidedly after we took her swimming for the first time and she was going to charge through that water, drowning be damned! I am so looking forward to her getting older - I too am not a big fan of the baby days. But I do miss my sweet little baby, esp. since I know she is my last.

Ahh..he is getting SO big. Still super cute though! Wish our little girl would hurry up and get born already. :)

Not to rub it in or anything, but your baby has more teeth than my 2.5yo!

Oh, I love the baby stage and my 9 month old is growing far too fast. He's as big as an 18 month old and trying to stand up alone (we've mastered crawling, pulling up and cruising furniture). Where 'o where has my baby gone!!! Ike is absolutely adorable as well as your other handsome boys! Eat it up, Amy, it goes so fast!! I also have a 7 year old son and that went by crazy fast!

Thanks for making me cry! Do you ever strip him down to his diaper, just to find your baby again? No? Just me, then. Also - LOVED your 3 AM flowchart. I design my dream home at 3 AM too!

"...he'll get a crazy look in his eyes and wave his arms around while shrieking EAT? EAT? EAT! until you share."

I remain impressed by the teeth. Mine is 18mths next week and has.. 6. He uses them REALLY well, but jeez louise.

My youngest (and LAST) is 20 months now and while I will be glad when the "Nononono--what do you have in your mouth?!" stage is over, I am holding onto every last bit of baby in her with everything I have. She now says her name clearly and runs at top speed without falling, but she still calls the bathtub the tabub and, most importantly, still snuggles into my shoulder when I sing her lullabies.

I am with you on enjoying these kid years before they become teenagers. I'm a junior high SLP and shudder to think that one day I will have 12-, 14-, and 15-year-old girls living in my house at the same time! I hear boarding schools are nice?

I don't know if I've ever shared my grandfather in-law's take on having three boys (he also had three girls, but no sayings regarding them, lol).

Giggling at your flowchart, but crying at that beautiful boy growing up SO FAST. He's so gorgeous, Amy!

ahhh, these are so cute! These precious little ones grow up so fast and before you know it are off to preschool! Check out my site http:/askmissramelleaboutchilcare.com

Sniff!! I cuddle my almost-walking 11-month-old squishy beautiful last baby girl extra close every day because her dear darling chubby baby legs are about to morph into the same scratched-up strong skinny things her 3 year old sister sports. Sigh. But! she has no teeth yet! None! WHUT? I know, crazy. Her sister had at least 6 by this age. Genes are crazy shit.