While You Were Sparkling

So I was going to write about Sparklecorn today and how it all went down. Picture nine straight hours of rolling anxiety attacks...several honest-to-God crying jags alongside the ladies of the CheeseburgHer party... the prospect of partying in the equivalent of a flourescent-lit produce aisle at Wal-Mart...begging for decorating help via text, email, Twitter, a bullhorn on Times Square...a cake that got stuck in traffic...missing keys to electrical boxes...getting personally singled out and screamed at by the first irate party guest who walked in the door (because we started late) and crying again because oh my God I'm all sore muscles and exposed nerve endings, stop yelling at me, YOU KNOW THE USUAL.

But then I looked at the first batch of photos and all that bullshit up and fell right out of my brain. I can barely remember a minute of it now. You guys are just that pretty, I guess.

This bullshit, on the other hand: 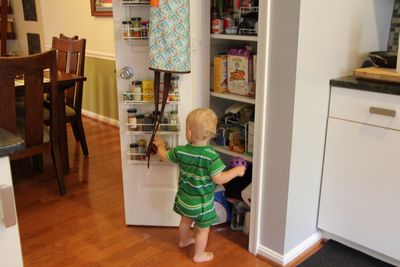 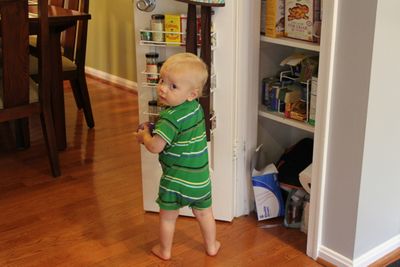 I don't know what this child ate while we were away, but look at him. Standing there, reorganizing the spice rack. On his LEGS. 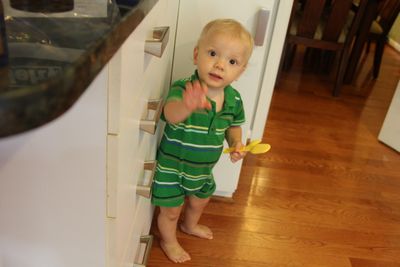 BOY LEGS. With kneecaps and shit, instead of gnocchi-chub-pillows. 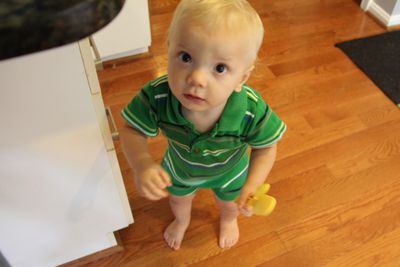 If you guess incorrectly at what he's trying to say he will give you a withering look and sigh. "Hmmphf" apparently translates to "I pity your feeble brain, but I believe I asked for some Cheerios. Chop chop."

(Though I'm getting pretty good at understanding this age: today I asked him if he was crying because he tried to taste an antibacterial wipe he found in my purse. He tried to deny it for awhile but I knew the truth.) At least he still looks a couple years younger than Noah, right? Who is all, suddenly, six-going-on-12. 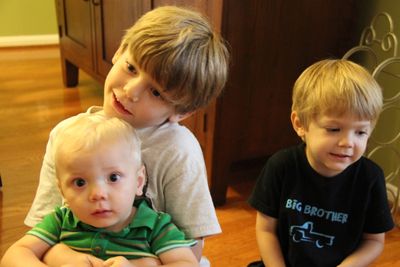 And Ezra is three-going-on-what-the-hell, weren't YOU just a baby five minutes ago? 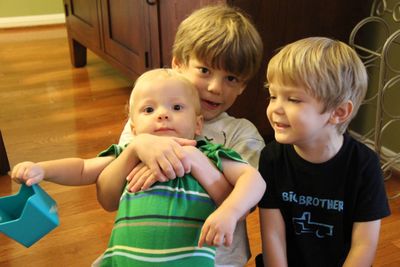 Sigh. It's never going to stop, is it? 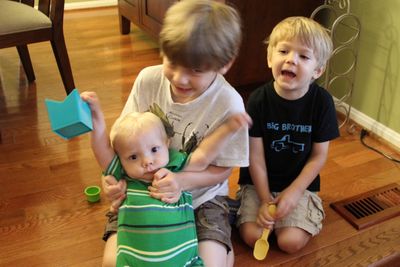 (I don't know who is more underwhelmed by that thought, me or Ike. MO-O-OOM!)

I just want to say that I am very sorry that someone YELLED at you over Sparklecorn getting off to a late start. WTF? I was one of the first 20ish people who stood in line for about a half hour until things got started, but you know what? Shit happens. It was a kick-ass party. Again, I'm sorry. Sparklecorn was awesome.

I would have kicked out anyone who came to my party and then yelled at me! for shame, yell-y person!

I shall send a few sparkles to the Great Unicorn so that Noah, Ezra and Ike SLOW THE NON-BABYHOOD right this instant.

Also so that the rude person who dare to yell at you (wth?) experiences some proper karma soon (maybe that already happened, and they had the worst hangover evah!)

Stop? Hell no. My baby is going to be 27 in less than two months and I am fuck certain she started kindergarten last spring. What has happened to the last flippin' QUARTER CENTURY is the rallying scream around here.

On a calmer note, handsome brood ya got there, mama. Love them, I had only girl children. Two, girls, no boys, hard to wrap my head around their energy but I am trying since my husband gets a bizarre look when I say how much I like girls... Not that I'd leave him for a girl. I don't think. Unless she supported Habitat and let me be a flaming progressive out loud. (wow, that got away from me, sorry)

Hey buddy. That lady was touched, clearly. I'm sorry that happened, but please know the rest of us drunk dancing freaks loved your party hard. Much appreciated, I promise you.

It was a GREAT party (in spite of Yelly Bitch). The best part of it, for me, was finally meeting you!

Are you feeding those kids Miracle Gro? If Baby Ike keeps this up, his voice will change before he starts talking! I remember the day I realized that no, the twelve year old doesn't have a sore throat, dumbass, his voice is changing. I called my mom, sobbing, "No. No. No. After the hell his oldest two kids put us through, I need this one to stay little for a few more years so I can catch my breath." My mother just laughed. "Oh, you'll need to hang on tight, dear, because this ride doesn't stop. Hell, it doesn't even slow down!" I got the distinct impression that she'd been waiting all of my life for the shoe to be on the other foot...

And I'm sure you told said guest, "I will WORD WRAP YOUR FACE if you don't chill the fu¢k out." Right?

I was in line wondering what was going on... but I kept telling the people around me, "Don't worry, Amy is in charge, and this party is always AWESOME." You know what? We had more time to talk & meet other people while standing there... among the THOUSAND of attendees...
(FYI the Fashion Show started at least 45 minutes late, so don't feel so bad)

Amy, we all had a kick-ass time at Sparklecorn. I know there were a few crazy bloggers there... I volunteered at the reg. desk and, at one point, was asked to hold back the masses who were impatiently waiting for lunch on Friday. It went well for about 10 minutes... then I was bowled over (they just NEEDED front row seats for Martha's talk). Classy, right?

2nd to last picture is the best sibling pic of all time. I always choose something a little like that for the Christmas cards. We LOVE each other... choke choke.

Happy anniversary to you and Jason! My husband and I are your anniversary twins, right down to the year. I figured he couldn't possibly forget 8-8-98. :) Hope you had a great day!

Reading your blog is always somewhat cathartic for me -- as my baby comes up on 18 months old (MY BAAAAAAAAAYBEEEEEEEE NOOOOO) and I fight Michelle Duggaresque urges to procreate again and again I see I'm not the only one thrown for a loop by the passage of time. I think it's a combo of kids growing at an alarming rate during the first couple of years, plus our own aging causing our perception of time to speed up. Whatever it is it's surprisingly hard to grapple with. I tell myself to shut up and get over it whenever I'm having a frustrating baby moment -- Why you cryin' AGAIN, crazy kid? No, don't touch your poop! No, don't eat that fossilized baked bean you found under your high chair seat cover! -- but then later in a quiet moment you're nuzzling their shrinking soft cheeks and admiring their vanishing knuckle dimples and oh, the loss of babyhood hurts. Sigh.

Wait. Someone YELLED at YOU? A GUEST? YELLED.AT.YOU.?

What sort of show are they running over there in the Land of the Free but Clearly Cranky?

If I had been there I would have been stalking you like the batshit crazy inappropriate person I am.

Don't say you haven't been warned.

Let me get this straight. Someone yelled at you for attending something free? Who goes to a party on time anyway?

(Okay, releasing my residual shock and awe about getting YELLED AT by a CRAZY PERSON here.)

We started about 30 minutes late, because the cake was still being assembled and touched up. Also because we were promised that someone was coming to turn off a bunch of annoying ceiling lights (it IS a dance party, and we spent ALL DAY negotiating with the hotel to achieve clubby/appropriate lighting). The guy shows up to turn off the lights...but doesn't have the right key. He leaves to go get it, Tracey and I collectively hurl ourselves to the floor to weep.

The instant the cake artist (Elena from Charm City Cakes! We love her!) was done, we let people in, shitty lighting aside. This lady comes up and stares at me like she knows me. I don't know her but welcome her to the party; she keeps staring. It's already kind of weird. Then she starts asking why we started late. I explain; she insists that none of my "excuses" are worthy of making people wait.

I apologize. She starts demanding to know whose fault it was, who hired the people at fault, I keep repeating that it wasn't anyone's "fault," it was just a couple crappy logistical things but hey, you're here now, go get a drink and try to enjoy yourself.

She refuses to budge and drop it. She then starts demanding my business card so...I don't know. She can get me in trouble? Tell me I suck over email and Twitter later? I don't even have a card with me (honest truth, I bring a phone and a lipstick to Sparklecorn and that's it). She doesn't believe me or something and I start cracking and trying to extricate myself from...whatever is happening because I CAN'T HELP YOU, LADY.

Charlie pulls me away and super-politely tells the lady that I'm done and she should move along. Like, seriously. She gets screechy and angry and then...

SHE YANKS CHARLIE'S CONFERENCE BADGE OFF HIS SHIRT AND RUNS AWAY WITH IT.

I later found out that she'd been verbally abusive to a bunch of other people and was escorted out of the party later, since she wasn't even REGISTERED FOR BLOGHER and was already wearing someone ELSE'S badge to get in.

Charlie's badge was never seen or heard from again. The End!

Oh, I am trying to imagine the restraint Charlie used to not toake that woman DOWN.
I looked at my just-about-start-kindergartner yesterday and realized that she's already lost the chubby-five year old face. Her first adult tooth is in and it's changed her mouth and she is hurtling towards 6 on full-on Kidhood. Holy cats, I do not remember signing off on this.

My sister and I have a matched set of boys who are growing so fast. It seems like just a blink ago they were babies and now they are 12. Hard to believe!

Oh...I love watching you love your boys, and now they are all growing up. Can you have another one please? I'll be sad if there are no more babies, you do such a good job of enjoying them.

Those boys. Those beautiful boys. I pink sparkly heart those boys.

Dude. That is unfuckingacceptable. I can't believe you started that party late. And you didn't have a card on you? That's BlogHer rule number one you just broke.

It was an excellent party-I had a blast and danced my silly ass off. My only regret was that I didn't get to meet you so I could smother you in sweet, non-stalkery kisses.

Not a regret for you, though, I'm sure.

Seriously, I have been reading about your BlogHer trips for years, and I finally got to go to one. It was awesome and horrible at different points, but I'm so glad I went.

Sparklecorn was so much fun. That badge-thieving ho bag needs to check herself. Thanks for a great party!

Your children are so beautiful and wonderfully individual. I'm so happy for you and Jason. What a truly wonderful family. No, I don't have a stick up you know where and I'm usually good with more casual language, but I don't know how else to describe you guys. Maybe "you're super fly, yo. Did you and yours!"

(Also - the mouse who has taken up residence in my backyard ivy is not being detained and is free to move about the planet any time, now. Cuz next step is a trap, yo. He hasn't responded to my polite requests to vacation the m%^#}{f#%^*+^ premises. I tried. )