Well, let me tell you WHAT; it has been a seriously exciting 24 hours around here. I mean, by blogging standards. Okay, by THIS BLOG'S standards.

You know what? Shut up. Forget I said anything.

Part Excitement The First: I lost my wallet for 27 whole minutes. Twenty-seven excruciating minutes, during which I ran around the house like a panicked flappy loon while Jason called a pizza restaurant I sorta kinda thought maybe I paid for the check and so maaaaaybe I left it on the table? But he asked them if they found a "clutch-purse" and of course they hadn't found a "clutch-purse" and so I hollered at him from two rooms over (where I was re-digging through my purse for the millionth time because WALLETS DON'T JUST SPROUT LEGS AND WALK) that no, IT WASN'T A CLUTCH-PURSE, IT'S A WALLET. A WALLLLLLLL-ET.

He hung up without clarifying and stared at me. "What's the difference? It's not there."

"HOW DO YOU KNOW IT'S NOT THERE," I countered. "You called it a 'clutch-purse.' The results are invalid."

"Amy, do you really think they would say, hmmm, we did find that orange wallet that no one's claimed yet, but this guy's asking about an orange clutch-purse. That's two completely different things! Probably shouldn't even mention it!"

"They might! Because they are two different things! Although I don't think 'clutch-purse' is actually something people even say but oh wait look here's my wallet never mind."

It was in the foyer under the shoe rack, next to some Legos. 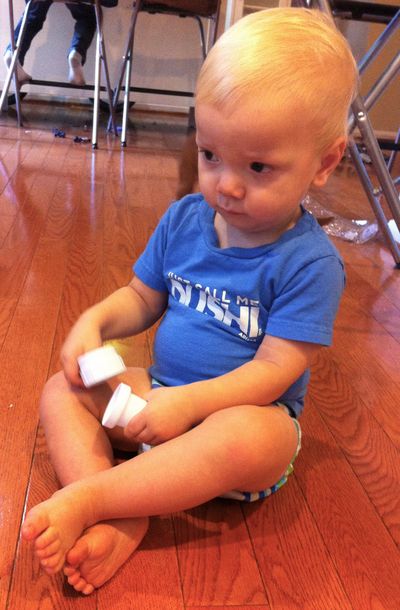 And he's already getting a headstart on the next growth spurt, with some incredibly tippy-toe balance. 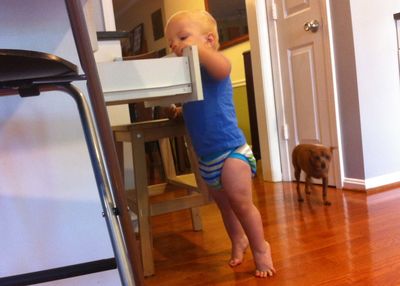 Part Excitement The Third: Back-to-School Night. The always-thrilling experience of getting to perch half a buttcheek on a teeny tiny chair for 45 minutes wishing all the other parents would stop being so goddamned INVOLVED and ENTHUSIASTIC and QUESTION-ASKING-Y because c'mon! We could have left 15 minutes ago! You're ruining recess! Let's bail before she changes her mind and gives us homework!

This was Noah's note to us this year: 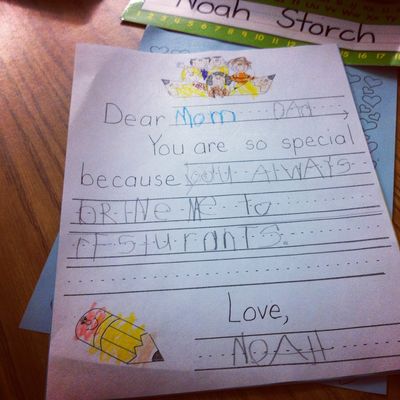 You are so special because you AlWAYS bRiNe Me to rESturanTS.

Damn skippy, you little pickle. AND DON'T YOU EVER FORGET IT.

A friend wrote in her blog that her children (3 & 4.5) were playing a game where they loaded up all their farm animals in the tractor "and took them to a restaurant"...... :/

You're brining him because he'll taste better, right? On the menu at tonight's restaurant, Brined Noah. It will be darn tasty.

An that is such a save this forever letter that it hurts!

Ike's growth spurt means great things for Miles and his clothes selection. Dibbing the 18 month clothes was the best thing I've ever done. :)

I can only hope one day my son will show so much wisdom regarding the importance of restaurants as a sign of motherly love.

I will see you your 27 minutes with my OMG kindergarten ends like now and WHEREISMYCARKEY? I borrowed the neighbor's car, picked up the kid, drove to the dealer to replace the spare I'd lost months before. 2 days later they reappeared on the floor inches from my bed. pretty sure I didn't leave them there, or walk over them in my frenzy

My "save forever" piece of paper says, "I love my mommy because she puts soap in my mouth." ?!?!?!? I got some hairy eyeballs from the daycare workers that day until we finally figured out he was talking about toothpaste.

Noah is a mini-foodie in the making!

Au contraire! Wallets (and everything else) DO sprout legs and walk away... toddler legs.

You've answered your fair share of diaper-related questions, so I hope you'll forgive one more: what kind of diaper cover is Ike wearing? So cute! With the stripes! And the chubby legs!

you were right to be concerned about specifically calling your lost wallet a WALLET, though even that doesn't always work.

i lost mine a couple months ago, and when i called the restaurant to see if they had it, they said no. when i went by there the next day, again, no... but, wait, what's that? a WALLET! they had dismissed it because they thought it was a man's wallet. gah.

...but then again I don't think I've ever heard a woman call a wallet/purse/legitimate clutch purse that outside of a magazine.

I love your blog! Great pictures and wonderful writing! FOund you through Huffington Post-- congrats on getting featured!

Check out my adventures with my amazing toddler here:
http://chatonsworld.blogspot.com/

I remembered this one time. My child was a couple of months old and my husband made me go out with my friends for a "me" time. I was enjoying with my friends at this really great restaurant when I fished inside my bag for my wallet and grabbed my child's pacifier instead! Hahaha...

One year, my daughter wrote: I love my mommy because she buys me sugary snacks.

I wanted to die.

This year's preschool father's day card from the 3 yo read, "Thank you for giving me food." It was incredibly typical of our hollow-legged boy that it's being saved in the scrapbook. Glad that mine isn't the only one!