BUT IT'S ALL OVER NOW.

The walking-up-the-stair like a fully erect homo sapien photo I posted on Monday is not even half of what's going on, of what Not-So-Baby Ike is now capable of.

Turn your back on him for a second and voila! He's pushed a stepstool out from where you "cleverly" "hid" it and... 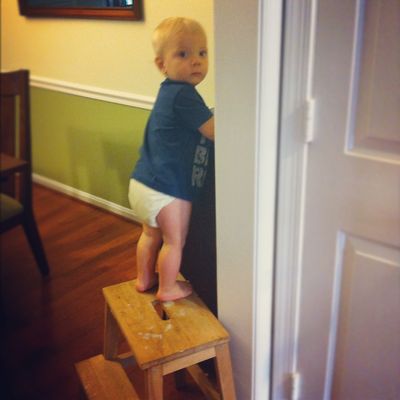 Not pictured: The time he pulled this same trick in front of the open pantry and I found him up on his tippy toes, hurling soup cans onto the floor while trying to reach a box of granola bars.

Personally, I blame the playgrounds. They are giving our country's toddlers an inflated sense of accomplishment and rewarding them for gross motor skill development and I for one will not stand for it anymore. 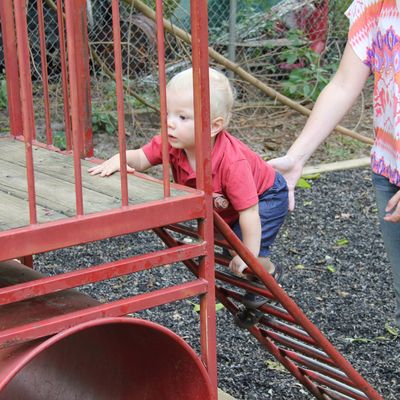 They are a menace and must be stopped. 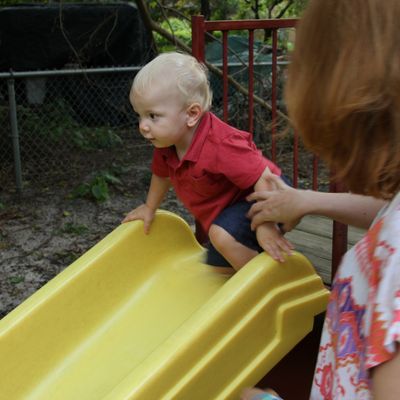 Somebody start a petition or something.

We installed drawer and cabinet latches about six years ago. We broke every single one in under a week. 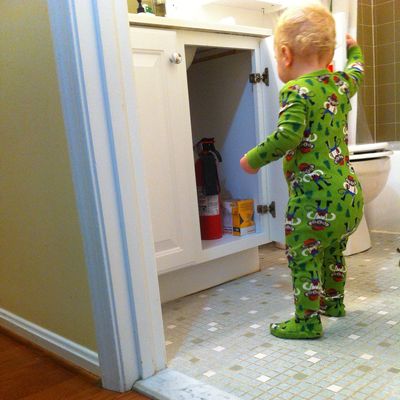 And that about brings you up-to-date on our current level of childproofing, save for a couple baby gates that Noah and Ezra know how to open but never remember to close and that detail will be important in a bit. 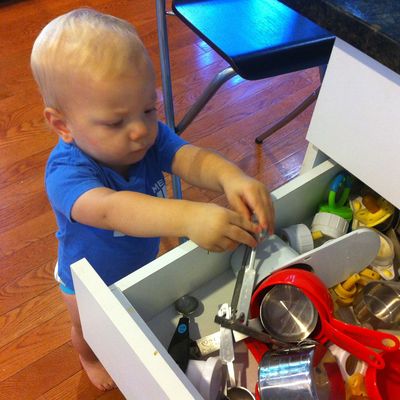 I have zero measuring spoons now. I have no idea where he's taking them.

But back to the baby gate thing. I close them, the boys open them. And Baby Ike has developed a near sixth sense when it comes to the opportunity. 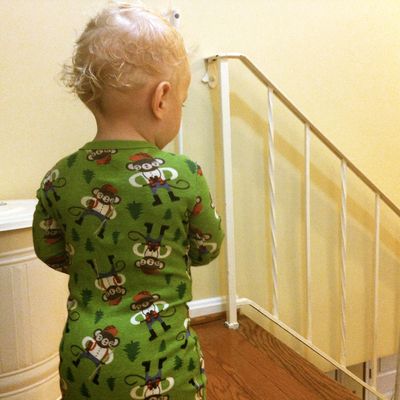 We've seen him go UP plenty of times. As of last night, he know thinks he's hot shit at the going down part too. 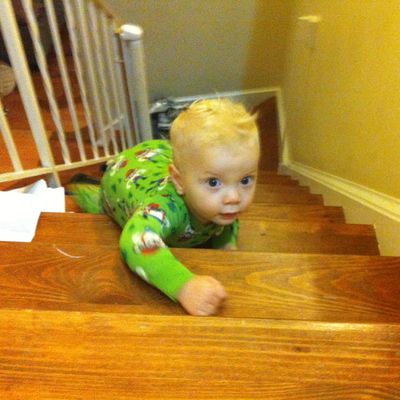 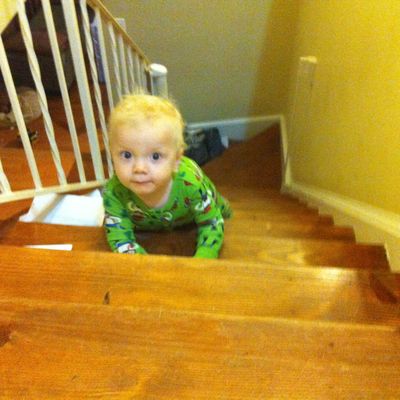 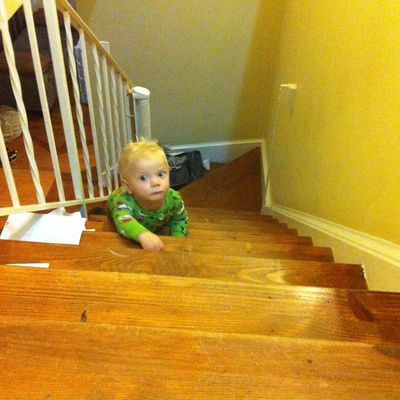 Which, you know, fine. One less thing to worry about, right? He can get up, he can get back down. Except that he's already tired of the belly-scoot method and tried to walk down the stairs this morning.

Not pictured: Yeah, THAT.

(He's fine. I caught him. And my heart resumed normal function about four hours later.) 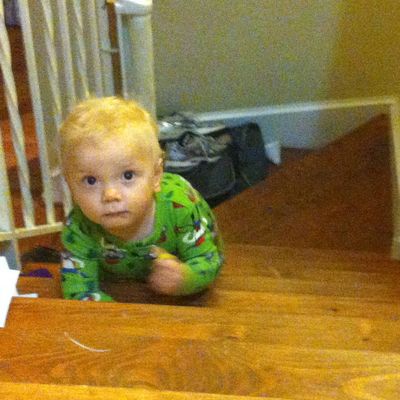 Good thing he's so cute. Those genes must survive to adulthood. I'll do my best.

He is fantastic. So adorable and I'm sorry he's moving/growing too fast. Apparently it's what they do. My oldest is about to be ten - ya, TEN! - and I am fuhreaking out.

Also, I like the picture of the stool. Now I know we're not the only household whose Ikea stool is covered with random gunk on the top. I keep telling myself I'm going to sand it down, paint it with high gloss paint, and decoupage the top so it's washable. Then I laugh and laugh and continue to ignore the gunk.

our Owen is just 13 months old and thinks he can walk down the stairs, too! good thing he hasn't learned that stool trick yet, although i give him like a nano-second before he's in the pantry!

But...but...the IMPORTANT question is - where did you get Ike's pajamas?? They are adorable!

Do I see curls on Not-So-Baby Ike's head??? *bites fist at the cuteness*

This is here some bullshit.

And the "Wha? Don't do this?" face in the stepstool pic is killing me.

And stairs. Oh, how they frighten me so, especially when Z has on socks w/out skid thingamabobs. Again, notsobabymokeyzillaclimbingbecauseyoucandontmakeitright-toddlerIke, this some bullshit.

@Paige EXACTLY. Ours got hopelessly splattered up when we painted the kitchen. I thought about painting the top step with the chalkboard paint, or just painting it and adding a coat of Varathane, but then...ehhhhhhhhh...whatever.

@Lauren YES! He's extra curly in that pic because he'd just had a bath, but he does indeed have a little mop of curls in the back.

He is awfully adorable.

My son, who thankfully isn't really mobile yet (he's still army wriggling and rolling his way around the house) thinks my measuring cups are the best toy ever. He's taken control of all the 1/4 cup ones.

OMG I love the jumpsuit!!! Jumpsuit addict here, which one is this??

Ohhhh searching Old navy now.. and bummed out because it's all so AFFORDABLE, but yeah, I live in Holland and have no creditcard... booo

Every time you post this kid's shenanigans - I mean, developmental accomplishments - I feel like I'm looking into a little crystal ball that goes just a few months into the future with my 10-month-old. Which is helpful! But, you know, utterly terrifying. So...thanks?

HUH interesting. EZ (my son who's the same age as Ike) has busted every single childproof latch thingy that keep my OTHER kid out just fine. wtf. we are encountering stairs too. EZ fell from the landing to the hardwood floor. I didn't see it, I heard it. I. Can't. Even. Deal.

I just got my first pregnancy confirmed this morning, and your blog gives me so much hope and excitement for the future.

Yeah, I spent several hours one afternoon installing all those childproofing thingies in the kitchen. My daughter got up from her nap, tried to open the silverware drawer, and WAH BAM!! Toddler 1, childproofing drawer latch 0.

Oh, Amalah. Thanks for not being one of those moms who is afraid of putting pictures of her kids out into the internetz, because the world--MY world--would be a sadder place without your kids' faces. Dead baby panda sad.

We have a little Ike over here too....terrifying! His big brother is overly cautious and and observer....not so for little bro! He acts much too old for his 2 1/2 foot tall little body!

He is a hoot! Adorable!!

...and those curls! So dang sweet!

When my daughter was about Ike's age, she hid my ID somewhere inside the house. I never saw it again - ever, and that was 3 years ago. Did she eat it? Who knows... LOL

Whne my youngest was just a bit older, she developed these new skills in the space it took me to wipe the other kid''s butt:
1. find the kitchen tower (a stepstool with high ambitions) across the room
2. push the tower to the other counter where Mommy had been making dinner
3. climb up in the tower
4. find the large shiny chefs knife on the counter that has been safely out of reach
5. wave it in the air so that I could about have a heart attack when I found her.
I am having another one right now, omyfreakinglordchild. (OTOH, she just put both numbers in the potty, on Daddy's watch no less. All is forgiven.)

Part of me (a large part, actually) wishes you had published a picture of Ike throwing the soup cans. The look of determination on his face must have been classic.

I laughed so hard at these pictures. He is so cute with that mischievous monkey face going backwards down the stairs. We've come to the point, at 22 months, that we need to consider either step stools or putting stuff like snacks and toys in cabinets where our son can reach them because he has just started demanding things and will totally bust the child proofing to get into drawers anyway.
The one thing I am SUPER excited that I taught him is how to go down a flight of stairs on his butt, like I was taught...just bump, bump, bump on the diaper. No harm, no foul. He thinks it's super fun to say "bump bump bump" and I am super excited to not worry about him taking a header down the stairs while I'm trying to get him, myself and a bag of groceries into the apt.

I have a photo of my now 15 year old at age 19 months asleep at the top of the steps wedged under the baby gate. The puffy diapered half made it under successfully but only to be thwarted by his buddah belly and the necessary arm positioning (and even if these had gotten under, his giant head would have trapped him for sure.) Being awesome parents, we laughed ourselves silly and then took his picture before extracting safely to his bed. I treasure that photo.

I have never commented before, but this post spoke to me. I have a Not So Baby Monkey as well. I also have an 11 year old, 8 year old, and 5 year old. The monkey is 18 months. I had two boys and then a girl, and thank goodness because the girl wasn't quite so mobile, although extremely vocal. Anyway, I have totally underestimated this youngest boy. I have found him in numerous crazy locations, the latest of which was in the bathroom sink! Nothing stops him from his lofty goals. Just when I thought I had this whole parenting thing down. So anyway, I feel your pain. So far, my saving grace is that we live in a one level house, so no stairs, except for the basement which is not available to the bebe.

The post is written in very a good manner and it entails many useful information for me. I am happy to find your distinguished way of writing the post. Now you make it easy for me to understand and implement the concept. Thank you for the post.