I feel like we're maybe starting to get our sea legs back, a little bit, when it comes to taking our herd of children out into the world. The addition of a third baby was no big thang at first, back when he was more like an easily-portable, wearable meatloaf. We could still go places and do things — one of us could strap the baby on our back and we'd each take responsibility for one other child. (Though we definitely had our fair share of BUT I THOUGHT YOU HAD EZRA ZOMG moments.)

But now Ike is a third wholly-formed child; a third independent sentient mobile walking/running vulnerable disaster area. Now it's zone defense. It's taking calculated risks that Noah doesn't need constant monitoring on the playground or is continuing to walk behind us at the aquarium, or that Ezra will stay put at the front of a store for five goddamn minutes if you hand him an iPhone. With Ike, you cannot take such risks. Turn your back on him and he'll have found something disgusting to eat on the floor OR have managed to pull over a jewelry display and leave you on the hook for the world's ugliest broken piece-of-shit plastic necklace that still costs EIGHTY FUCKING SIX DOLLARS.

But still! We try! We took the kids to a children's museum yesterday and had an AMAZING time, but oh sweet baby cashew Jesus, it was exhausting. I lost Ezra three times. I went 20 minutes without a Noah sighting as he disappeared deep within a tree-story treehouse. I carried Ike up and down flights of stairs and chased him around hallways and exhibits, and at one point sat in front of a woman dressed like Mother Goose who was singing me (and only me) a song because all the babies (including mine) had lost interest and crawled away but I didn't want to be rude.

I finally excused myself because Ike climbed on top of a bench and was throwing blocks at a nearby pack of non-mobile floor-infants. 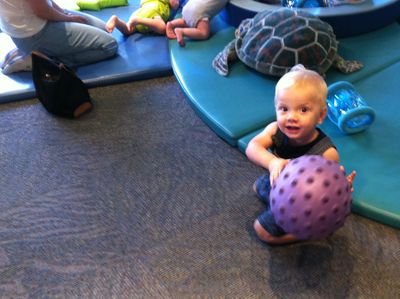 Jason and I took turns so we each got to do one exhibit one-on-one with each individual kid. I took Noah through a puzzle house and let Ezra cook me lunch at a play diner. 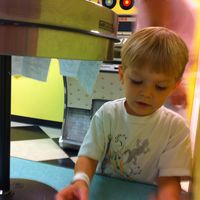 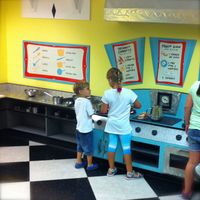 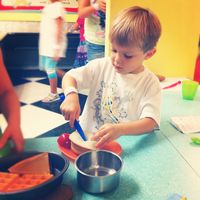 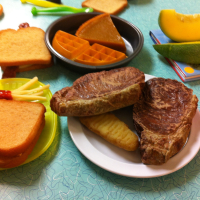 I'm not sure Jason tolerated a sit-down with the Lonely Mother Goose Lady, though. I think his designated Ike Activity involved an empty hallway. Ike went APESHIT over that awesome, mind-blowing hallway, man. 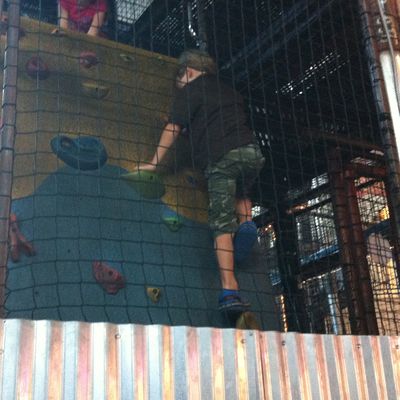 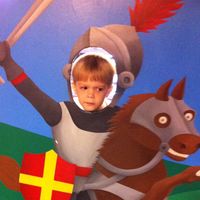 After the museum, we celebrated the usual way, with mediocre tourist-trap food, eaten in an exhausted, glazed-over manner. And Ike demonstrated his new favorite communication technique:

Your Offers Exhaust Him from amalah on Vimeo.

My littlest (19 months) does exactly that same thing. Too adorable, if mildly frustrating.

What, pray tell, is a sweet baby cashew Jesus? Does he come honey-glazed? Salted? With fruits (I think he'd like fruits).

Took all three to a children's museum by myself recently. And yes. It was everything you said BUT WITH MORE SCREAMING. The baby, the kids, me. Everyone was screaming. And getting lost. We had a great time though, seriously.

Oh, you guys are so so brave. I'm not sure I could do that with man to man, let alone zone! And the 'it's all too much!' video with Ike is so cute and hysterical.

And empty hallways are the BEST.

My boys are now 2 1/2, 5, 7 1/2-they are so loud and crazy and physical and now I finally get it. All of the "oh my God 3 boys comments I got, it just really never dawned on me until this year how wild it is going to be, how big and loud they are going to get, and my gosh how much they are going to eat. Embrace it!

OH! Port Discovery is my favorite place to take kids in this area. I am jealous that you got to go! I have never known a child who didnt fall in love with taht AMAZEBALLS diner.

My kid was out of visual contact in that 3 story climbing maze/treehouse thing at Port Discovery when he was about 3yo.

I turned my back on him for a second to park the stroller and take out his baby brother and off he went.

What you don't mention here is that there are multiple exits from that treehouse on 3 different floors!

Fortunately, I was with a friend and her six children and her oldest (an actual teenager) followed my son and eventually brought him back.

We've been back since then but they're older now and able to report back to a meeting place after climbing through.

But I still wonder how many little kids end up wandering through that place w/o their parents when they get off at a different floor . . .

We've been there and GOD I hate that treehouse! If only it didn't have exits on different floors. Otherwise it's great, but my kids are still young enough that 1-2 hours is plenty, and it is definitely exhausting!

The hallways! What the hell is up with the effing hallways? Everywhere we go my kids are nuts for running down empty hallways. It doesn't matter which character from their favorite TV show I've brought them to see, s/he pales in comparison to a good hallway.

It's nighttime here on the other side of the world so I woke my baby because I just couldn't stop laughing at the Mother Goose story, oh but it was totally worth it. I can picture you sitting there not being rude and I know I would do the exact same thing. Thank you so much!

Do the boys do the slide? The dark ass long ass slide? The last time we went to PD was last summer I think and Z was newly mobile and almost got his fingers stuck in the door of the play area. I honed my climbing skills and chased him everywhere. It was awful yet wonderful.

I recently read that, as a good mom, I'm supposed to actually PLAY with the kids when I take them to the park/children's museum. So yesterday, I was building with my 6 year old and lost my 2-year old. NO MORE PLAYING. My 4-year-old was fine, though. Still, I need to use all my energies monitoring all my childrens.

Looks like so much fun (for the kids). Loved the mother goose bit, I'd be the same, couldn't possibly offend mother goose!

We have been meaning to go to that museum - looks like a good place for our son Loren.

We are actually excited to be involved in the infancy of a new museum opening in Bethesda, MD - KID Museum (find out more on facebook.com/KIDMuseum). The museum will actually have an "introduction to the community" at the The World of Montgomery Festival's International Village October 21!

ALL ABOARD on that treehouse SUCKING. WTF? Love the rest of that place, but never going again too gd stressful.

I just can't quit laughing at the polite Amy sitting and listening to Mother Goose sing to her.

And here I was completely ignoring them once they turned 4...I'm probably in for some long nights at the ER with broken bones or stitches or something lovely like that. No biggie. Kidding - I have (only!) 2 thus far but as you can see, I'm not an overachiever like @Beth up there or anything...geez, playing with your kids?! Who thunk that up? And also, that vid of Ike is precious.

The Port Discovery treehouse multi-story maze thingy - holy mother of gumby! My tiny 6 yr old went in with her older nephew and then he appeared but she did not. She finally made it out, scared but OK. Yikes. But the play diner was AWESOME! She would have been happy spending the entire day there. Glad you survived.

We went to Port Discovery in July during our visit with family in Bel Air. What we didn't count on was the number of summer camps who also decided that was a great day to take their campers. ZOMG, the noise, THE NOISE!!! My ears are still ringing. I also lost my entire family - husband, 2/3 kids, BIL, SIL and niece - when it was time to get everyone fed because there are so many levels and I'd go one way with the stroller, and they'd go the other way, and OMG THE NOISE!! I was so glad to see a Panera around the corner, although a bar with lots of booze would've been better.