The Face of Awesome

I don't know about you, but I'd give money to that face. 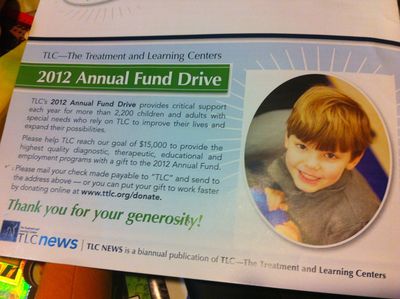 Before anyone jumps to the wrong (yet probably all-too-common these days) conclusion: No worries, Noah's photo wasn't ganked from my blog or Facebook. TLC is the non-profit organization that has been helping Noah (and us) for years now. It's where he attended the Miraculous Summer Camp of Miracles and The Preschool That Changed Our Lives. He still receives weekly occupational therapy there for ongoing issues with rigidity, self-regulation, social skills, etc. A couple years ago they asked if they could take photos of Noah and his therapist for brochures and stuff, and we agreed. I always forget about it, though, until one of the photos shows up somewhere, blast-from-the-past style.

I don't know how much longer Noah will require OT. (After several ridiculous tussles with several ridiculous insurance companies, we are finally on a plan that covers the weekly sessions without protest, so I am admittedly in no rush to change anything or draw the slightest bit of attention to ourselves.) All around, the reports are good-to-excellent: his teachers, his therapists, even his karate instructors are singing his praises and talking about corners turned, strides made, breakthroughs and maturity and etc. We're firmly in a "flow" portion of the endless ebb and flow cycle that is Noah's unique way of developing. Behavior, focus, flexibility, everything has taken a big leap forward. Even his eating habits have improved.

(You know what's responsible for THAT? A McDonald's Happy Meal hastily purchased at a drive-through while traveling to the beach this summer. He was too busy watching the damn TV in the damn minivan to protest. He discovered that McDonald's cheeseburgers are delicious, and has since been completely willing and enthusiastic to try other new foods in case they are also delicious. This weekend we went to a restaurant and he ORDERED A STEAK. What in the hell of a what, I ask you.)

Before school started, he was worried. He's beginning to sense that he's a little different, and aware that certain things are harder for him. He wants to do good and be good, but just...can't, sometimes. Even after all these years of camps and schools and evaluations and therapy, he's never asked why he goes to TLC or has two classrooms at school, or what "OT" stands for.

And so we had our first real talk about it. About some of it, anyway.

(I try not to hammer you guys with tons of self-promoting links, but this week's Advice Smackdown is more personal than usual, so if you follow Noah's story you might enjoy it.)

When he saw his picture on the brochure that came in the mail, he didn't ask what it was for or why he was on it.

The youngest is about the age Noah was when I think I started reading your blog. I would be lying if I said I'm not a fan of his. This is awesome, and gives me all kinds of hope for my "doesn't require special service from school but still pretty damn quirky" kid.
If he thinks one brochure makes him famous, don't tell him about the blog and the little girls who think he's cute.

Love this. TLC did great things for my kids - especially Dr. Lisa Lenhart, who I cannot say enough good things about.

This probably goes without saying but Noah is a remarkable person and he's not even a decade old yet! That says A LOT about the people in his life.

I have followed your blog for a few years and watched the amazing Noah grow and bloom under your wonderful parenting. It won't be a straight line, but he will grow up to be a wonderful guy, who understands and is compassionate to others,and succeeds in life. I believe in Noah and you, because my "Noah" just started grad school in NYC in the honors program. These special boys have amazing capacities. #TeamNoah

This post came at the best possible time for me (thank you)! Our 4 year old over the past 18 months has been showing several behaviors that are worrisome and although his school has tried to help, we're at a place where we need to get him some help. We've found some local resources and he's being evaluated this week. One of my biggest worries is that he'll feel different if he's traveling from one preschool to another for these sessions, and I just want him to feel like everyone else. I know it will be a learning process, but thank you for talk about it and putting your story out there.

Love the update. Also? Noah, buddy, you've been famous for a while now, sweetie. Also? Running to smackdown now.)

(Not the WWE one)

I love posts like this. I remember your posts when you were first starting to suspect that something was amiss. Reading about how far he's come since then just always makes my day.

What a great post! My nearly 4 yr. old son is autistic and I've often wondered when we have the "you're a little different in a different way from how other people are different" talk.

OK first thing that came to mind was Mike Wazowski on the cover of the Monster's Inc magazine but it has the barcode over his face. He was still excited.

I smiled all the way through this. I ain't got nothing else to say.

I've worked in schools in suburban Maryland and now in Massachusetts and it amazes me how nonchalant kids are about SpEd and pull-outs.

Last year I did a lot of reading intervention for students who were struggling in reading, many of them were waiting for the IEP process to be done so they could go into the resource rooms. In K and 1 kids want to know when it's their turn to come with me. By 2nd and 3rd grade it's just a fact of life. There's a bump in the road for some kids in 4th, usually because they feel like they're missing something fun in homeroom.

Maybe I've just worked with great schools where the teacher's attitudes set a precedent but these kids don't seem to think that it's "weird" or "bad" to go to the resource room or to OT. (I had a kindergartener who called it "markers because they were mostly working on his writing. "I have to go do markers with Mrs. B."

On a more Noah related note: I love that story about the Happy Meal and I'm looking forward to telling it to my friends in Early Childhood. That's so adorably logical.

I just love so much about this. We also just had the first real conversation with our son about his special needs. I can't say it was as successful as your talk, but I just keep hoping that our words echo through his mind and I hope that one day he will come to us with questions.

I love the people of TLC. I ran the 5K they sponsor in November (King of the Road I think it's called). Awesome organization- so happy Noah is the face of the campaign! :-)

As a former quirky kid (now a quirky adult) I wish I'd had a place like TLC in my life.

As it is, I'm just here cheering you all on from the internet sidelines. :)

A related topic that I struggled with is helping your child share appropriate information with others about their issues. I didn't want my daughter to feel ashamed or like she had something to hide, but at the same time I had these visions of her walking into the school and saying "I TAKE BRAIN MEDICINE BECAUSE I'M DIFFERENT!" (read that in a Ralph Wiggum voice). It's a balancing act.

As we started our relationship with an OT for my son's handwriting/sensory processing, I explained to him that the OT was going to help him write better. He already knows he has trouble with writing -- he knew that without anyone 'diagnosing' him! I wanted to make sure he knew that he was going to be part of this solution cause he understood the goal and wanted himself to better his handwriting. Now he does his part by going to the OT willingly, doing what the OT asks him to do and doing the 'homework' she gives him.

Such a great post! And such a great kid. I needed a smile tonight. This did the trick! Thank you. :)

Yes, baby, you are famous. You don't know it, but lots of people out here are following your progress and rejoicing in your victories. Sending positive thoughts your way...