Home Archives About Subscribe Advice Smackdown Tip Jar
Seven? Seven. SEVEN.
It's Hard Out There For A Baby Ike

In the continuing saga that is That Weird Ear Lump, I had an MRI of mah head today. 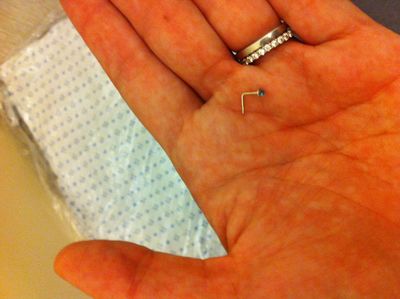 Dee, when your ear lump acts up, take out your nose ring!

I spent about a half hour crammed in a bionic tube, listening to an unnerving cacophony of clangs, bangs and techno beats. It was like trying to take a nap at a gay steel mill on dubstep night.

Still less annoying than the sound of multiple children whiiiiiinnnninggg, though.

Anyway, look! It's the inside of my head! 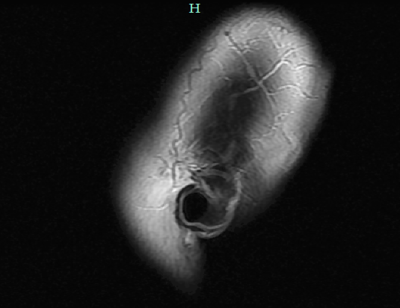 Specifically, the inside of my ear. Which looks more than vaguely Ackbar-ish. Tell the truth: how badly do you want to cut-and-paste some googly eyes and type IT'S A TRAP on this right now? Pretty bad, I bet. 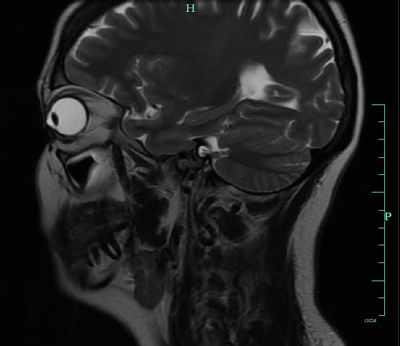 I am pretty sure this is the best, most flattering photo of me EVER. I should make this my Twitter avatar.

Anyway, here's The Lump, after a shot of contrast dye. 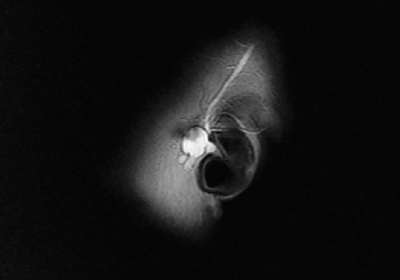 And while that looks cool and all, I was bummed to see this picture, as the technician explicitly told me that if the lump was in fact just a harmless fatty deposit or cyst, the contrast dye would do nothing to it and it wouldn't be visible. And yet there that fucker is, clear as day, looking all connected to Other Shit, and stuff.

Then again, I'm not a professional MRI Reader Person (don't let the size of that magnificent, spongy brain fool you), so I should probably put the CD of images and Google away and wait for my doctor to call with the full report. But where's the blogging fun in that? It's a tumah! Go for the bobopsy! Pour some wine on it!

I'm more concerned by the sinister eye you appear to have in the back of your head.

I'm sorry, but that whole head MRI - freaky shit right there! Hope all is good!

Forget the wine. Put some breastmilk on it. That shit works wonders.

(The saddest part about eventually formula feeding my oldest was that I could no longer spray breastmilk over her baby acne).

I have the exact same lump beside my left ear, so I'm totally going to diagnose myself based on your outcome. Fingers crossed for us!

Yes, Diane, that freaky eyeball! It looks like someone is peering through the brain.

Blow up and print that shit out and you have instant freaky Halloween decorations. BONUS.

I had no idea that eyeballs were so clear on an MRI. That full profile shot looks fake. And also creepy. But! Here's to a boring doctor's report in a few days!

I've got MS. Lots of MRIs. I find them relaxing (compared to two kids at home). I always try to name all 50 states in alphabetical order to keep me busy in there. Never gotten higher than 49. At different times in my life, Idaho, Iowa, and Ohio are all bastards.

This is why I can't have tests done. I have a bleeding aneurysm, I'm sure. The damn scan is going to confirm it. I DON'T WANT TO FUCKING CONFIRM IT. Poor dumb noncancerousnontumorous lady lump. Should have just stayed quiet. Now you gotsta pay.

Dude, just spray some windex on it.

Hey, there's a star from the silent movies in your head! Right there, see? Bak of your head. Above that thing that looks like a heart.

Duuuuude your eyeball is super creepy

yeah, I join the others... why is your eyeball...pointy? it's freaking me out.

You have the crazy eyes in that second shot!

Totally jealous, btw. I had to get a CAT scan one time (or an MRI? I don't know) and they took all these pictures of my brain and then they NEVER LET ME SEE THEM. Jerks! How am I supposed to ponder my own existence when I can't even see my own thinkhole?

You definitely need to make a weird freaky t-shirt with the full profile shot!

Ok so I read a few blogs and have never commented. I really enjoy yours and have been reading for quite some time but always sorta shy away from actually taking the step to comment. This post, however, I just have to say something. So last year I was diagnosed with breast cancer (cause that makes sense for a 34 year old woman). Anyway got through the surgery - on maintenace drugs - doing great. Yeh me right? Anyway in December I had my first PET scan to make sure nothing had spread from what seemed like a routine, fairly innocuous tumor. They gave me a copy of the scan on CD (this was probably a mistake). So I went home that evening and popped it in the home computer (this was definately a mistake) expecting a field of grey. After all I had been told that only active cells would light up showing problem areas. I'm supposed to be past this so bring on the grey! So imagine my horrified shock to see my scan lit up like a Christmas tree. There was crying and broad declarations of how I was in "trouble." Super fun for my husband who is actually used to living with a very chill person (really....don't look at me like that). After a night of no sleep and a message to my Dr's nurse at 6 am the next morning stating that perhaps they call me like "now because I was probably dying and we should get on that," I get a call from my Dr. Yeah scan was totally normal. Apparently (to the surprise of no one except me) you have a lot of active cells in some pretty important organs (liver, kidneys, brain, heart - although perhaps the ones in my brain aren't so active...). Oh...ok? Thanks.... We have a new rule in my house - I am not allowed to look at test results or try to diagnose myself with anything more serious than a splinter and even that I need a second opinion from my husband. Moral - Step away from Google and wait for the call. Cause you can make yourself batshit crazy with that. Wow - first comment is a novel. Sorry about that!

Yeah, that's either Admiral Ackbar or that x-ray of Homer where he had the crayon shoved up his nose.

OMG. Your x-ray reminds me of Homer Simpson!! Also, I give myself mad pop culture props for getting "It's a tumah."

I hope you are OK.

There is the section in the full head scan part, towards the top right, and it looks like there is a face in the mist. Is that your conscience? ;)
Wishing nice non freakish test results.

That profile is epic. It definitely needs to be your avatar.

Good thoughts to you. Or prayers, whichever you want.

You must be real smart - look at the size of your brainzzz!!
And wine! For sure!

You totally look like the Grinch. Please don't steal Christmas... Ha Ha! Good luck and keeping my fingers crossed that it turns out to be a simple lump removal. I had those - no biggie. Of course, I knew my lumps were my 11th and 12th finger buds!

I hope the lump turns out to be nothing, I'm sure it will be. That being said that profile shot just made me crack. up! I think it's the eyeball.

That Big Head image should be your Christmas card. EYEBALL. Good luck with Lumpy.

That nose ring looks like the one I gave you!

Ok,inquiring minds want to know: Is the white line of contrast traveling up towards the top of your head....or the bottom? Cool MRI! Now, if anyone wants to know if you have brains, just whip THAT puppy out of your purse!

It looks like an upside down fetus in your ear! Who knew?

The profile shot so reminds me of Dr Zoidberg. Please make it your twitter avatar so I can hear "Now Zoidberg is the hero" in my head whenever you tweet.

Argh sorry to hear about the mass. When I saw your L of metal at first I thought that was removed from it (duh, nose ring).

I too have a mass - about 8 cm inside a bone in my arm. Fortunately it gets left alone so long as it doesn't change. I go for periodic MRIs.

Whatever your course of action, I'll be thinking of you hoping it's speedy and painless.

That is, in a word, exactly what happened to me. I have an acoustic neuroma maybe they call is a schwanoma sometimes. Anyway. Keep us posted.

Here's hoping that you're just a super freaky medical anomaly. More specifically, that you're a super duper 100% healthy medical freakshow.

I hope you get news about what it is wicked fast so you don't go insane, and I hope it turns out it's an innocuous blob.

Also, I think your eye merely looks extremely surprised at being scanned. Or maybe that's incredulity. I'll get back to you.

sorry you have to go through this. Even in all likelihood its benign, its still stressful.

Weird looking! Hope all is ok. They didn't give you music to listen to? When I had one I listened to the Beatles.

Hoping everything works out fine, Amy!

2. LOVE the side profile. (Who's the girl in the upper right looking at us? She has a mean 'smokey eye' going on.)

The eye freaks me out more than the lump. And the lump is probably nothing to worry about.

I'm sorry you are dealing with this, but as an aside: You got to see your brain? How cool is that! I want to see my brain, too! Just without the ear lump thing.

1. Breastmilk on it? Ha-fuckin-LAIRIOUS.
2. I've never seen any of the Star Wars movies (don't look at me like that) but recently my 20 month old became enamored by the word "trap!" (seriously, it has a full body movement associated with it) and we shout "It's a TRAP!" about 20 times/day. Naturally this has led to strangers congratulating me on teaching her Star Wats quotes, so I finally googled it and yeah, your scan is TOTES Adm Ackbar.

I totally want a picture of my brain now.

OMG!Now I'm totally freaking out.My one year old daughter has the same thing on her ear (which I realized after you first wrote about your lump).I asked her pediatrician about it and she made it sound like it was no big deal.Now I'm going to be obsessed with her lump!