This Is the Birthday That Never Ends

After a few years of convincing our children that a visit from Grandma and Grandpa totally counts as a birthday party, we decided that we owed them a wee bit of a blowout.

And so in accordance with our local traditions, we set two dozen or so children loose in a local inflatable thunderdome for a couple hours. 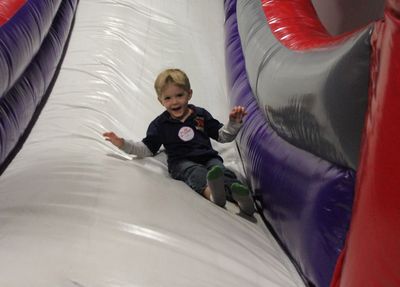 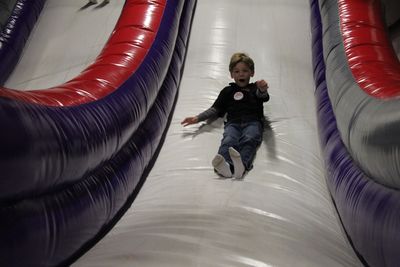 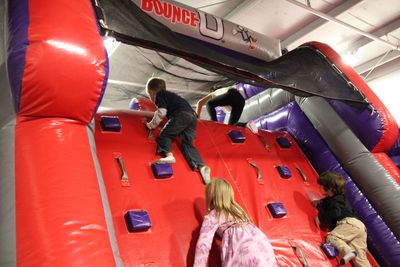 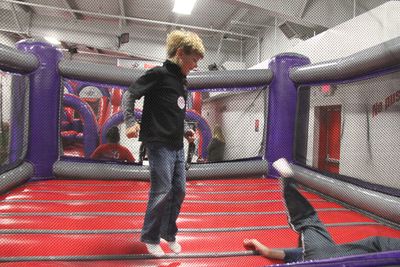 Not to brag or anything, but this was THE birthday party to be at, at least between the hours of 1:00 and 2:45 pm. The next party started at three and was probably pretty much the same. 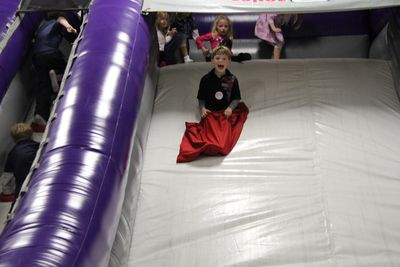 Slides, climbing, jumping, bouncing and the sounds of shrieking sweaty children hurling their bodies in every direction because everything is soft and squishy and WE ARE INVINCIBLE UNTIL SOMEBODY FACEPLANTS ON THE CARPET. 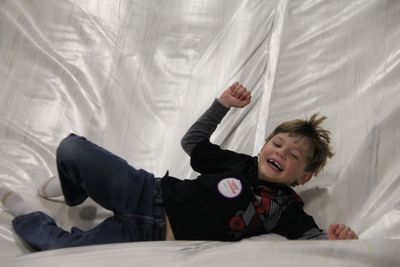 (So not kidding about the sweaty part. By the end of the party the children all looked like they'd just run through a car wash.) 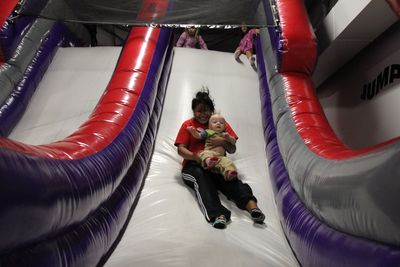 Ike, who is — surprise, surprise — turning out to be absolutely FEARLESS, charmed our party hosts into taking him on every piece of equipment approximately 100 million times. After awhile they were just tossing him down the slide free-fall style while he shrieked in delight. 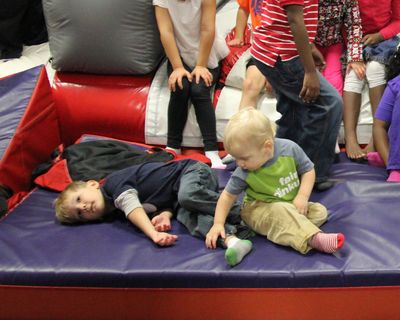 After a couple hours it became clear that everybody was in dire need of a shitload of sugar. 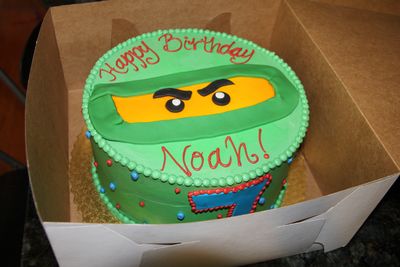 Luckily we had some on hand.

So. Okay. We decided on two cakes because 1) it would let us cover both sides of the oft-brutal chocolate vs. vanilla debate, 2) I was not sure I wanted Noah and Ezra crowding and elbowing each other just inches away from open flames, and 3) the bakery described these as "two small rounds," so why the heck not?

They ended up being easily twice as big as we were expecting, but also twice as BADASS AWESOME LOOKING. 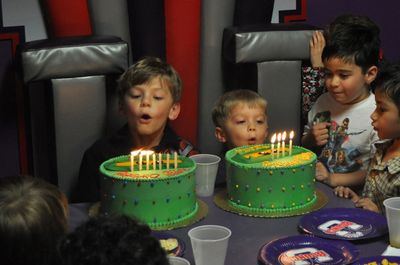 Every little boy in attendance (and several of the girls) shrieked at the sight of GREEN NINJA CAKES and I was like, WINNING AT PARTIES AND PARENTHOOD. OR AT LEAST ORDER FORMS AT BAKERIES.

(Ten minutes later one of those boys pointedly ask me why Noah "chose" to put a bunch of lame erasers in the goody bags, which of course were something I chose, so all coolness points were obviously immediately lost.) 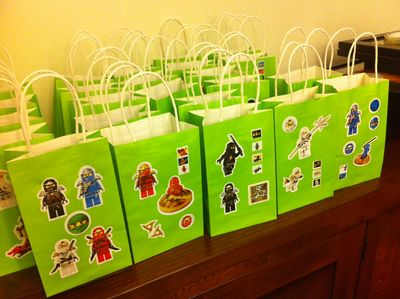 (Though nobody can take away my awesome they-don't-make-licensed-Ninjago-party-merchandise sticker-application skillz.)

We killed one whole cake and about a third of the other. All the leftover slices are vanilla, which of course means they are naturally part of a balanced breakfast.

So now the High Birthday Season is officially over around here. Until June, anyway, but luckily Ike still doesn't know that many people. Except Grandma and Grandpa. Those guys know how to party. 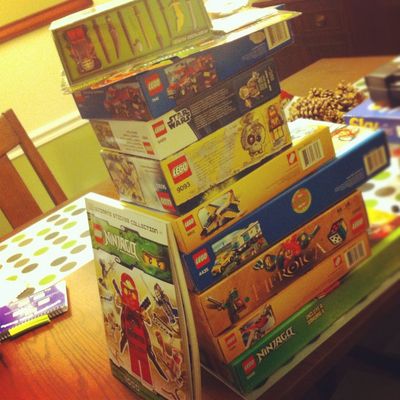 Noah is in heaven. I am in some heavy-duty reinforced combat boots and mourning the official loss of the last uncluttered surfaces in the house. They belong to the Legos, now. Save yourselves. Have some cake.

You are very brave indeed.

Where did you get the Ninjago cakes?! They look awesome! I'm going to have to rip that idea off of you. Your boys look like they had the time of their lives!

That you were able to hold off on that as long as you did is nothing short of miraculous. And kids do have a ridiculous amount of fun in places like that.

Also I think that are erasers are awesome so you get double the coolness points there. Way to go Mama!

Awesome!! The green ninja cakes are very cool, so you get all the cool mom points from me. The picture of the pile of Legos waiting to be assembled reminds me of my son's recent birthday. And why I have a Lego Millennium Falcon as a centerpiece on my dining room table.

So that's what the inside of one of those bouncy places looks like! I'm sure I'll experience it in a few years.

Looks like the boys had a blast! As a local, do you mind me asking where you got the cakes? They look great.

My daughter charmed me and everyone else at a party last week when she looked in the goody bag and saw two items. She said, "Did they forget to put the rest of the stuff in there??" Repeatedly, actually. *sigh* Goody bags are the hardest part of birthdays, imho. Rockin' party!!

Commence the lego takeover. I so wanna play and build and knock down and build again! Need a sitter? Zah looks spent but Ike is all AGAIN! WHERE'RE THE ARMS TO LIFT ME TO SLIDE AGAIN?

We've only ever had one blowout and that was for the middle girl (Hm. I guess that probably made the older girl pissed the Hell off now that I think about it. I hope she's forgotten. I'll never ask). She attended a daycare less than a mile up the road. We rented a cheese bus, had the entire school (except the babies; nobody wants the babies ruining all the funz!) in the backyard. There was a moonbounce. And cotton candy. And too much cake. Oh, and mud. They left filthy. Please do not send us your dry cleaning bills, thank you.

EXCITED about your fabulous idea to sticker-ize green bags. My soon-to-be nine-year-old is having a Ninjago party and I'm desperate for ideas!

Also not sold in stores: Green Ninjago (aka Lloyd, MOM) costumes. AT LAST! My sewing machine was put to good use, and I am once again Mother of the Year (at least in this house).

Leggo rock! Except at 2 am barefoot!

At first I was all:
Totally awesome slides! Kiddos look wicked cute! All the fun!

Please save some cake for me. ;) OH! That means we have to get together again soon...hint, hint!!!!! Miss your faces...so sorry we missed the party!

Ha Ha! My 4-year-old went to a party there this summer. He spent the whole time running AROUND the slides. Only one time did he dare to enter one of the bouncy rooms and then he came right back out. At the end he said he had a great time! But it looks like your boys REALLY had a great time!

Just the blissed-out expressions on their faces say it all. Worth it!

@Marg & @Courtney We ordered the cakes from Fancy Cakes by Leslie in downtown Bethesda. Such a nice lady who customized everything & (obviously) did an amazing job. Plus! Delicious cake and not just a mess of gross fondant!

@Laurie I JUST finished dyeing a white karate suit for a makeshift green ninja costume. Using a green t-shirt for a mask. Oy to the vey.

My sister dealt with her boys' Lego mess by taking a bakery rack and transforming it into storage for in-progress Lego projects. It looks awesome. I try not to hate her for her creativity. Or for the fact she didn't think of it 13 years ago when my son was five.

Is that Noah on the little red rug SHRIEKING WITH JOY? I don't think I've ever seen a person - any person, EVER! - so happy.

I strongly prefer vanilla over chocolate desserts (I know, I'm weird). I think it's pretty awesome you had two cakes to please the vanilla crowd too.

Random Lego question: Do you keep all the lego sets separate from each other or do they all go in the same bin after a while?

Serious Lego management question here. Do you keep those sets separated and played with individually? Or does it all go into one big amazeballs pile of Legos?

Those inflatable play places are my favorite for birthday party invites. The exhaustion they get from the non-stop movement perfectly balances the sugar high from the cake, so the kids are always fantastically easy to deal with when the party is over.

I'm laughing so hard at this! I have narrowly escaped the whole need for a party-at-the-bouncy-place thing by bribing my soon-to-be-6-yo (I'm hyphen happy) to agreeing to a trip to Legoland in lieu of a party. Yes, this is why we moved away from DC - to be closer to Orlando. :) HOWEVER, I have been warned by aforementioned child that he still needs a Nanjago birthday cake. I'm going to have a show a picture of this one to the bakery...except he wants the Blue Ninja (what was his name?) because of the whole cool jet plane thing. Oy.
OH, and this system for legos has really worked for us, especially after I started threatening to throw away any Legos I find on the floor. My feet are thankful. http://iheartorganizing.blogspot.com/2011/10/organizing-legos-part-3-creating.html

Those cakes are awesome! I hear you on Legos. We made a dedicated Lego area this week actually, to keep them from taking over the couch. So now they are everywhere but the couch, which is progress.

If they had a place like that inflatable party world here, I think I would just buy a lifetime membership and move in.

And also? Those cakes are amazing!

We just hit up BounceU for their preschool playdate last week, and it. was. awesome. Two sweaty + exhausted kids = BEST NAPTIME EVER. And you're not kidding about how drenched they get, either! I have to remember to bring a towel next time. :)

Love the cakes! I recognized them as Ninjago right away, because my mom and I made Ninjago cake pops for a little boy's birthday at our bakery. And he had a cake to match, but it was the red ninja. It's so simple because all you have to do is the eyes, but it looks so cool!

That looked like a killer birthday party... luckily for us the kidlet just turned three, which means that parties are still more or less about having a huge BBQ in the backyard where the parents drink beer. Next year I think we might be in trouble.
Oh and CAAAAAAAKE. At 32 weeks pregnant I could climb in and devour that. I would cut someone for a piece of cake these days. Gahhhh.