Home Archives About Subscribe Advice Smackdown Tip Jar
In Which I Spend an Awful Lot of Time Talking About Dishes
Photography. EVERY TIME.

It's the Most Wonderful Time of the Year

Tuesday night, this post by Heather B got the two of us texting all nostalgically about Times My Kids Threw Up. (Yes, seriously. She managed to make my vomiting children sound endearing. Kind of.)

And I helpfully tossed in a new anecdote: Ike was sick on Saturday night, alllll night, and around 4 am I basically let him barf directly into my hands because I was out of towels.

(MY OVERSHARING KNOWS NO TECHNOLOGICAL BOUNDARIES OR LIMITS.)

I washed my hands afterwards (promise), but it was all for naught. Just hours after our conversation I came down with the bug myself. Hard. Bad. Indecent in every way. To the point where you're sick with dehydration but even the tiniest sip of water won't stay down.

(Though does anybody else have a problem with an inability to "sip" water when you're really, really thirsty? I kept telling myself "just a sip, just a sip!" because I knew my stomach was still in full rebellion mode, but then the second the water touched my parched tongue I was all, "GLOBBLE GULP MARRRRRRRRGHH SLARP.")

Anyway, I spent the entire day in bed yesterday. Around 8:30 am I sent a few nonsensical texts to people to explain that I would not be working at all that day, and I may have called at least one person by the wrong name. I mumbled something to Jason about the sitter being here until lunchtime and then it's ALL YOU BUDDY.

Then I went back to sleep until noon.

At that point I attempted to suck on some ice chips while weakly fending off the affections of my two youngest children. Back to sleep until four, when it was Noah's turn to be very concerned about me in the loudest, most exhuberantly physical way possible. Around six I finally graduated to real water and chicken broth. By nine I felt brave enough to turn on the TV, even if there was a high chance of seeing some food-related advertisments or SNL's 4,202,230th re-run of the Schweddy Balls holiday sketch.

Around two in the morning, it was Ezra's turn to start puking. OH COME ON.

Luckily by then I felt strong enough to help Jason change sheets. Though by 7:15 we were officially Out Of Clean Sheets.

He's currently on the couch watching Sprout and sucking on ice chips. The usual. 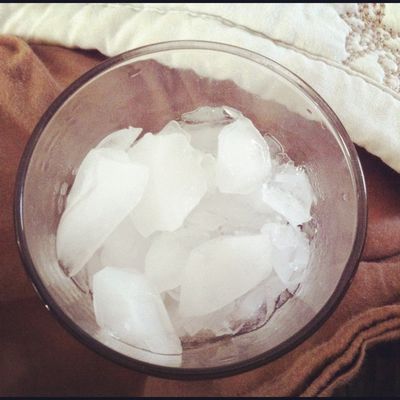 Cheers! Hopefully I can write more later when no one is yakking anymore.

That is all NOT RIGHT. I thought stomach viruses were supposed to be relegated to the spring. They shouldn't be allowed to sneak up on us in winter when there's already cold and flus and black plague. FWIW, our pediatric nurse practicioner says little sips of Gatorade/Pedialyte are better - the salt/electrolytes help settle the stomach and it's less likely to be, ah, rejected than plain water. GET BETTER STORCH HOUSEHOLD.

We have some variation of some sort of something going through our house. One or two people get it, recover, then the germs wink at each other from their hiding places on sheets I may or may not have changed (the NyQuil/Tylenol Cold combo causes me to black out sometimes) and attack one or two more people, then the original one or two people the following week. The germs are now singing all around these dumb ass non-Lysol using people' bush. Luckily, we are horkless. Hope y'all are, um, normal(?) soon.

Feel better soon! I have let my daughter throw up in my hands before - she has some sort of over-active gag reflex and if it's my hands or my in-laws' couch....

Well, crap. When I first saw your Instagram/FB post, I was thinking Baby Storch #4 was on the way. "Oh, that Amy! Has no idea she's knocked up again!"

Double crap for it being the actual stomach flu and not another sweet little munchkin I can NOMNOMNOM through my computer screen.

Have totally caught barf in my hands, in my lap, on my chest, etc.

And last night, was mopping barf off of the bathroom floor at 2AM. Yep. The joys of parenthood.

Assvice: baking soda. A pinch in a glass of water will make you feel better, quench your thirst, but taste so good/bad sweet/salty you won't guzzle. You will sip.

Add to washing machine, sheets etc, makes em smell sweet. Sprinkle in the bottom of the barf bucket, and it soaks up some smell AND when rinsing bowl, helps rinsee not wanna barf.

Baking soda is a pukers best friend. Works for drunks too.

Oh god. The puke on hands thing did me in. Don't you guys own a bucket? I know you do. I've seen Ike sitting naked in one. I think "teh bukkit" needs a new day job.

Ginger Ale / 7 up / popsicles when dehydrated and nauseous help me not to scarf too much of it at a time.

Good luck! We had it last week (Thanksgiving got cancelled in our house, sad face). First it hit the 16-month old, then me, then my hubs. Luckily we weren't all sick at the same time. Hope everyone recovers quickly in your household!

I had the virus last week two days before I was supposed to host Thanksgiving for the first time. My greatest fear is that my husband and I will get sick at the same time. I have no idea what we'd do with our 1 year old. Perhaps the cat could take over?

oh, how i feel your pain. my little guy (15 mos.) woke up in a bed of puke (that he had rolled around in, yay) this Tues, and then vomited every 20 mins. for a few hours. then my husband fed him eggs (EGGS! OMG!) at 6 because he "looked hungry" ...and then of course he puked eggs all over the carseat straps on the way to drop daddy off at work. OY.

How long before someone decides you are pregnant? Doesn't that always happen when you are sick?

So...I didn't see Noah or Jason's name on the list....you know how the round robin stomach virus works...ugh! I too have had the puke in my hands, oh and all in my bed (which was truly horrifying).

My family always starts off a puker with 7-up (oddly no other white soda works the same) and then if you can keep that down; plain white rice. I usually can keep down 7up when I can't keep down water for some reason. Even flat 7up for non bubble likers....

My sympathies, I hope you all recover very soon. Our last semi-annual barf fest took place in July, when I was 8 months pregnant. Had to go to the hospital, which I've grown to view as my opportunity for some alone time and appreciate it as such, alas there was too much GLOBBLE GULP MARRRRRRRRGHH SLARP going on to properly enjoy my stay.

My 2 yr old had this very same thing on Monday. She puked 12-14 times in 20 hours (I counted), and yes, I caught some of it with my hands too. After 24 hrs of no puke, I took her back to daycare yesterday where she had a banana - the B from the BRAT diet - when she promptly threw up again. Twice. I thought these yarking viruses were a myth, because in 8 years of parenting, it has never ever happened to my other kids. Or me or my husband. The 8 yr old did throw up on Thursday, but just once. I fear the 4 yr old has a target on her back. Crap, maybe I do too! Noooooooooooooo!!!!

I'm preggers and all I can think about now is Shweddy Balls! You think they still got it at Walmart? I might have to go check in a minute!

please, please, PLEASE for the love of holy gut spray, go get yerself some Boiron Ipecacuahna homeopathic tabs. i promise you (seriously! PROMISE!) they will stop the barfing within 15 minutes of the first dose. they are safe for kids and adults and have no contraindications. take 5 tabs every 15 minutes for two hours, then continue w/5 every hour for a day. next day take 5 every 2-4 hrs, or when queasy. MAGIC. feel better, and here's to no more "SPLAT."

Before I had kids, I thought catching puke in your hands was *the* grossest thing EVAH. 2 kids, one of whom is a Puker, later, and I. get. it.

oh god, it hit out here in Colorado too. My 19mo daughter started Wednesday night before Thanksgiving and I started in on Saturday night after - on top of being in my first trimester. Thankfully hubs and my mom were spared so everyone could be taken care of. Turns out it ran rampant through the church where she goes to Mother's Day Out once a week. yay. Hope it runs it's course through your house soon!

Yupou are so contagious it rode the Interwebs to my place and jumped species. Woke up to the sound of the dog puking between the top two covers. The other occupant didn't even wake up while I changed the blankets. Dog is now sleeping in the cats' bed on the I carpeted floor. Thanks for sharing.

Ugh- I had that the Saturday after Thanksgiving...which coincidently was the day of my first baby shower. I literally walked into my sister-in-laws house for the shower..said hi to about 3 of the 50 people there and ran upstairs and started puking. It was a fun day. Luckily I made it through opening presents without having to run to the bathroom.