Oh Christmas Tree, You Are Drunk 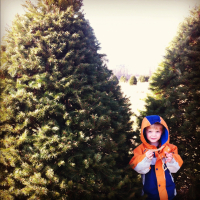 Thrilling update on the stomach flu front: We were all fine, until we were not. Noah woke up complaining of nausea this morning...but still managed to seem a bit too chipper about the whole stay-home-on-the-couch-and-watch-TV aspect for me to be fully convinced that the plague and pestilence were once again upon us. "Now I can't go to school today!" he wailed dramatically, yet he was unable to mask the quiet level of glee that was bubbling just below the surface. "Mmm-hmm," I replied, struggling to walk the fine line between Sympathetic Mommy Who Makes Sick Days All About Fluffy Couch Beds & Cartoons Because Poor Baby...and Suspicious Mommy Who Kind Of Thinks You're Faking. Compromise: I made him a Couch Bed but refused to turn the TV on. You get to stay home but you're gonna be bored out of your mind. THAT'LL LEARN YA. 45 Minutes Later: The TV is on now. He really is sick, and I'm an asshole. It turns out, though, that seven-year-old children can get themselves to the bathroom and throw up in the toilet like civilized human beings. So that's nice. And a first. Practically a vacation day, comparatively speaking. Anyway, there WAS a... Read more →