Ommahgod. Okay. I think...yes. I think I can finally stop leading off every. goddamned. blog post. with an update on Look Who's Puking Now. We're all better now. Jason, that magnificent bearded bastard, was our last holdout and it looks like he's going to make it through completely uninfected.

Unless I just jinxed him. Right then. I'd delete that sentence but 1) the universe KNOWS I typed it so the damage is probably already done, and 2) I've been waiting my entire life to type the words "magnificent bearded bastard" in reference to my husband, so whatever. SORRY, HONEY.

In fact, I like calling him that so much I might — finally, after eight freaking years of this shitshow — give him an anonymous blog moniker and refer to him as MBB full-time now. Until he shaves, which he keeps threatening to do, until I pout.

Anyway. I have lost my train of thought. It's okay, I didn't really have a point anyway.

And now I have a conference call for my other life, the one that doesn't involve talking about vomit and boobs. Hold on. This'll only take an hour or so, since that's my maximum limit on pretending to know what I'm talking about. 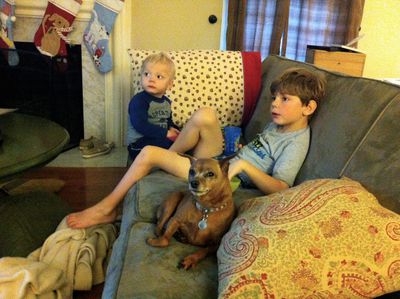 So we finally have bid adieu to the Couch Bed and vaccuumed up the Recovery Cheerios that fell in between the cushions.

The only lasting effect seems to be Noah's insistence that it wasn't germs that made him sick, it was the candy he'd eaten Sunday night from the advent calendar. 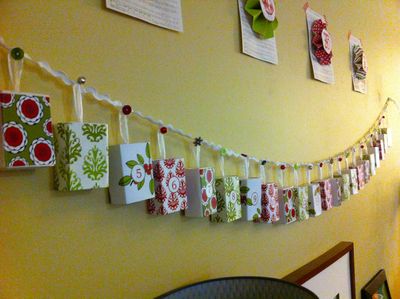 We'll see how long that lasts.

(Though to this day I still cannot eat angel food cake after a particularly vicious stomach flu incident from my childhood. Hours upon hours of angel-food-cake-flavored nausea. Disgusting. I can't even smell angel food cake without gagging.)

For now he's been giving his candy to Ike, whose own bout with the barf began a few hours after we took them all to see Wreck-It Ralph, during which I kept Ike quiet by feeding him an entire bag of Reese's Pieces.

Let us never speak of that crib sheet again. 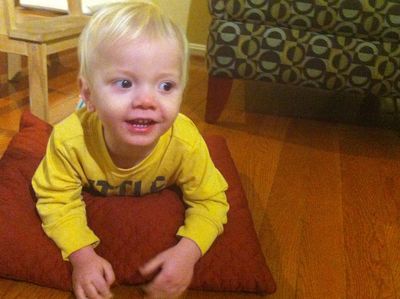 But Ike's still totally down with Reese's Pieces. And the advent calendar. And couch Cheerios. And basically all foods in general.

So glad that everyone is better! Hopefully the lone holdout doesn't get jinxed!

Ike is cool because Ike hasn't figured out it's gross yet. My childhood gross out is Chicken a-la-King on toast. I am still convinced that meal causes stomach flu.

I cannot eat tangerines after a bad one making me ill. I'm glad it wasn't candy or beer!

One year my daughter had the stomach flu & the first thing she was able to keep down was part of an apple... for probably 5 years after that incident, everytime she threw up she'd ask for an apple, like it was some miracle cure. I know I know, apple a day keeps the dr away, but you're still hunched over the toilet, I don't think an apple will help now (poor kid). She still loves apples though! =)

I love your Advent calendar! I need someone to teach ME how to give up candy. Preferably without vomiting.

I barfed rice all down the stairs after the first time I tried soy sauce. That was the last soy sauce for many a year.

Ike is totally the cutest. But your advent calendar is amazing. Did you make that your own crafty self?

Cherry candy canes are my childhood vomit hold over. Can not even take the smell of them...

Did I somehow miss the point where Noah's legs got all lanky-like?

Glad you're all on the mend!

Yuuuuuck. I'm glad it's gone (knockonwood). Two things our family can barf with no fallout other than the literal...never mind, what I'm saying is people in this house can puke pizza or rice and beans and still be fine with those foods afterwards. Cabbage is a totally different story. Ugh. Can't be near the cabbage.

I had that with cinnamon toast! So sad--it's delicious.

That's the Garcia effect, not eating a food because you think it made you sick. I feel that way about fritoes and philly cheesesteaks.

My husband STILL attributes random causes to any illness or malady, no matter how unlikely. Drives me crazy!

Yes, honey, I'm sure that brown lettuce caused your headache.

Your Advent calendar is very cool!

The picture of those little boys under the hideous term "motherf.....rs" is just awful.... imagine your sweet little four year old face and next to it, your Dad's writing "Fatherfu....r" if your boys see that in your scrapbook down the road you will be hard pressed to justify your "loose" language....Mommy blog-- that's what this is, isn't it?

I think if I were looking back on a blog like this that my mom wrote I would find great humor in it. Lighten up.

Omg with the prefolds as inserts!!! Not sure why I've never thought of that but you just saved my sanity! It's after noon and I haven't had to change her outfit once... Thank you thank you thank you!!!

Can you please have another baby? Because they are so cute. It would be super fun. Maybe we should wait and talk about this when you've forgotten the barf.

Oreos! I still can't eat Oreos, since I ate a whole package when I was 5 while watching "Dallas" with my dad (great parenting, dude)!!