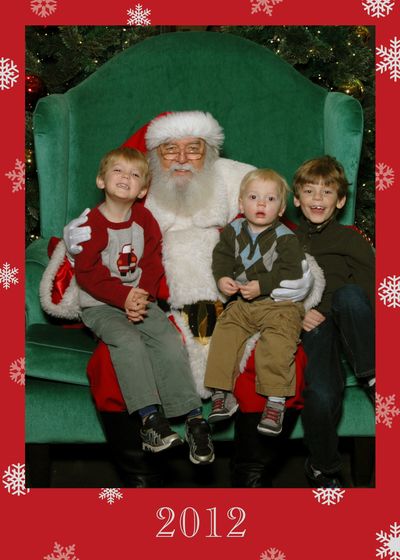 Look at that pack of disheveled little cheesebars. WHERE IS THEIR MOTHER AND WHY DOESN'T SHE DO SOMETHING ABOUT IT.

So I really thought this year would be the year that ended our streak of having all the kids smiling while sitting on Santa's lap.

(Well, more like two kids smiling, while the other one stares confusedly off into the horizon, like maaaan, I have no idea what's going on right now.)

I actually predicted that Ike would probably cry. While the general amount of Photo Ham around our house is reaching Def Con 5, Deep-Fried Pork Belly With A Side Of CHEEEEEESE levels, Ike tends to get a little shy and reserved around strangers. Combined with some really bad timing on our part, it looked like we'd be depositing him on the giant fluffy red stranger's lap about a good hour past naptime.

Now, SOME PARENTS (read: the non-asshole kind) might decide to just skip the santa photo this year, instead of deliberately setting their toddler up for tears. Or at least decide to try again a different day. Or at least make some attempt at coordinated holiday fashion beyond: Uh. Everybody Put On A Sweater, We're Going To Sears!

(Been there, done that, totally over it. But just look at that photo and tell me: Does anybody have their pants on backwards?)

(I'm asking because I can't tell. Ezra actually might. I know for a fact his underwear was and sometimes those things tend to get mixed up together.)

But Ike surprised me by being completely chill about the whole befuddling experience, probably thanks to his older brothers being there and appropriately excited. Noah asked for (surprise) Hobbit Legos, and Ezra asked for (ohgodhelpusall) a drum set.

Oh yeah. There's child-sized drum set in a box in my office RIGHT NOW, people. We are so in for it, we don't even know how in for it we are.

Ike asked for the box of hand-me-down toddler toys I just stumbled upon in the basement three weeks ago (including the FUCK YEAH BALL POPPER), so...you know. He'll be super happy about that.

Anyway, I should report that four out of five toddlers ahead of us in line screamed inconsolably during their entire visit with Santa. That either means we win, or else our toddler has already given up on trying to understand any of the fool stupid shit we make him do.

My four year old wants a drum set too - may I ask what you bought? Are they real drums from a music store, just child-sized?

Love that picture. Love it! It made my whole day. I only have one child - an 18 month old daughter - and I decided to skip Santa this year, because I just know she would have freaked the heck out. Next year we are doing it for sure, though, and she will likely be making the same expression Ike is in that picture.

Oh, that ball popper. We have to give it breaks because the balls pop off the track and go everywhere! And Mommy can't stand having the music stuck in her head.

Just clicked through all to see all the previous Santa pics...your kids are SO ADORABLE!!! Noah has the cutest little smile in all of them. And I love the one of Ezra as a baby just completely passed out on Santa's lap.

Happy Holidays to the whole confused family. I love the photo. and your blog too.

Sigh. The ball popper appears to have moved from the "readily available plastic crap" category to the "I'm going to charge whatever I can get b/c Hasbro's not making it anymore and instead they make an elephant-shaped one but your kid doesn't really like elephants and it just doesn't seem as cool so you will pay me ha ha" category...

It has been a very noisy year.

Seriously, we have gone through four (FOUR!!!) ball poppers. LOVE. IT. but there's either some wierd electrical fields in our house that makes these thing break within a monthy, or they're shit. WTH?? When my MIL complained the comapnay sent two replacements and one didn't even work OUT OF THE BOX!! Argh.

My son had his photo taken with that very same Santa! Just imagine a confused 11 month old sitting in Ezra's spot, looking at the camera and halfway smiling. I've got to hand it to my kid, he seems willing to put up with mommy's nonsense. Although based on the number of meltdowns I saw while in line (a pretty short line too) we may be in for it next year.

Oddly enough, my four year old daughter (2 weeks younger than Ezra, as I may have mentioned a time or ten) has never been a fan of strangers holding her (or, for several months at the beginning - grandparents holding her) but she's always loved Santa. At 14 mos, so was sort of like Ike here, but since then, she's run right up and jumped into his lap. Loves costumed characters, too. Go figure.

And that was a very relieved Santa, after all those screaming toddlers, and those approaching 3 boys with pants-on-bacwards :D

I love that I'm still in the stage of crap gifts for the boy because YOUNGER KIDS JUST WANT TO OPEN SHIT.

We have never once done mall Santa. I am so very black for that, huh? But no, wait, some of my best friends are also black and they go, so. Well, yes it was a pointless comment YOU DON'T KNOW ME.

And drums. Whoo whee. We got a mini portable one for Z last year (subsequently slit, but let's not speak of it.) This year I'ma hand him a wooden spoon and tell him have at it with all the surfaces. Drum.

I have a little boy almost exactly Ezra's age (and your pics look so similar to mine, it's insane), and he got a drum set for Christmas last year. Honestly, they don't make that much noise, and he had largely destroyed it within the span of nine months.

A friend's little girl got lice from the mall Santa!

I'm glad to hear I'm not the only one giving a hand-me-down ball popper for Christmas this year. :)

We have not taken our boys (4 and almost 2) to see Santa this year. The baby has a very short list of people whom he tolerates and Santa doesn't make his list. And the big boy, by some miracle, doesn't realize you can ask Santa for specific presents. We are keeping that magic as long as we can. No drum sets here. Yet.

We have not taken our boys (4 and almost 2) to see Santa this year. The baby has a very short list of people whom he tolerates and Santa doesn't make his list. And the big boy, by some miracle, doesn't realize you can ask Santa for specific presents. We are keeping that magic as long as we can. No drum sets here. Yet.

I'm definitely a big asshole parent because I hoped for tears. Well, not tears exactly, but I did hope for an epic, classic bad Santa picture to amuse family and friends with. Darn our ABA center and their gentle and kind sensory-friendly Santa ;).

Beautiful photos. Smiles (including cheese) really touched my heart. Keep 'em coming - we need it now more than ever!

They are SO STINKIN CUTE. I love them. And I'm jealous. We haven't had a chance to visit Santa yet...but our little guy is only 2 so I am sure he doesn't mind. I just love Santa pictures. I really do. It's a disease.

You only have 3 kids now. You will probably mellow out after #4. And your boys are adorable!

Our toddler was all "Dude, I don't care where I sit, I'm eating raisins." Through the power of snack food, anything is possible.

We don't have kids yet, but my husband and I have a yearly tradition of perching on the second floor above the mall Santa and taking bets on which kids will cry. Terrible but I love I.

Drum set = not all that bad. I was muttering things like "how fucking stupid am I to order a drum set for the kids?" about this time last year. It was noisy for a couple of days, then they got over it. They play it pretty frequently and it is a constant source of amusement when friends come over, punctuated by the occasional loud order spit out by me or husband to "KNOCK IT OFF," but it's fun listening to them try to figure out how to play it. My older son is actually quite good. My younger son just bangs on it but whatever. And then there is my other kid - the one I did not give birth to but married, the one who I am convinced got me to order the damned thing because HE wanted it rather than because he wanted it for the kids.....- let's just say I think he missed his calling and he should have been touring with Rush, like he wanted to do his whole life. :)

Love the photo. Couldn't get our two year old to come near Santa, not even for a candy cane. The four year old was all over BOTH of Santa's knees....we had a good talk about what "greedy" means after he rattled off six or seven of the top items on his list. :)

We did Santa at the gym (what? it was a very nice Breakfast with Santa in the basketball court). So son #1-smiled like a big ole 6 year chesse head and son #2-the enternally happy baby boy took one look at the bearded terrorist and started screaming for security-a hilariously bad picture

I used to threaten every year to buy a drum set for my grandsons. Their mother was not amused. Then they grew up into middle school, and the younger boy decided he wanted to be in band. As a percussionist. I laughed for weeks. But now he's in the drum line of the high school marching band, so that's pretty cool, and he can actually drum, so it's not so much disjointed noise any more.