Home Archives About Subscribe Advice Smackdown Tip Jar
Amalah + Exercise = ErrorDoesNotCompute
15 Things I Love About This, The Greatest Gift of All

We Bought a Drum

And lo, an angel of the Lord said "you are a bunch of damn fools." 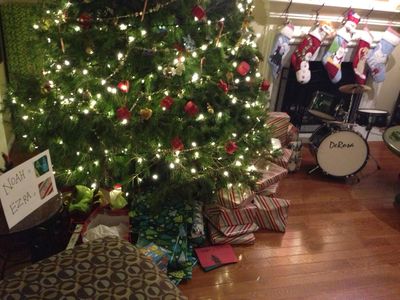 For the record, it was Jason's idea.

He maintains it is still a very good idea, and claims he will "never get tired" of listening to the various levels and styles of racket our various children make, because he is all kinds of nurturing and just that good of a dad, and was basically put here on earth to make the rest of us look bad. 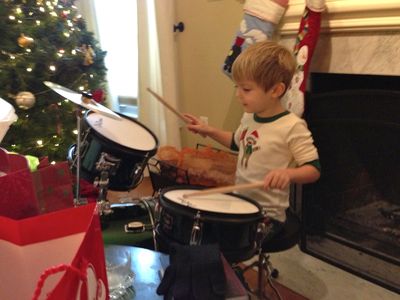 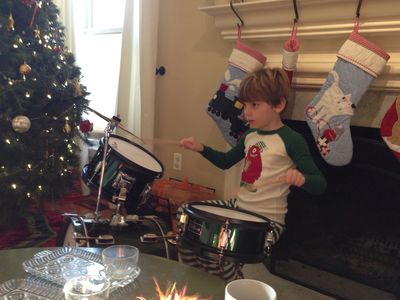 Noah prefers to play actual rhythms and to play along with actual music. In this photo he is either jamming to Seven Nation Army, his new ParaNorman DVD, or maybe just some Yule Log channel carols. We had kind of a weird, long morning. 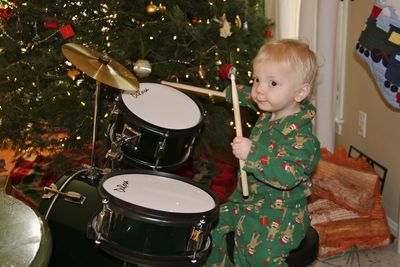 Then there's this one, who can't yet reach the bass drum pedal but isn't going to let that stop him from being adorable in the noisiest way possible.

We just purposely quadrupled the noise level in our house and I now probably have to promise our neighbors that yes, we'll move soon, don't worry, I'm sorry, would you like some fudge stuffed with money in the meantime?

But I don't know. I'm kind of digging the drums. I'm such a sucker for these boys, it's ridiculous. 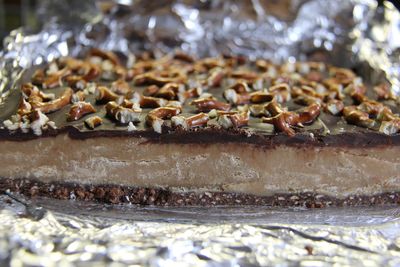 AND ALSO SOLID-YET-PLIABLE ENOUGH TO DOUBLE AS EARPLUGS.

Your boys are the cutest things ever. All three of them!

And, you should know, the first line of your blog made me snort with laughter and then I made every member of my family here it. I was more appreciative, just so you know. :-)

OMG. Hear. I meant *hear*. I am not one of those people who don't know the difference! Sheesh!!

We have the exact same drum set brand new from yesterday! OMG.

Yikes. I thought the trumpet and the sax for my two boys were bad enough (my husband's idea, of course)...

Oh man, what lies ahead of me in regards to boys. We had the same PJ's - Christmas sock monkeys FTW!

My mother in law bought our daughter a little toddler drum set. It makes us all ridiculously happy. Yay for drums and noise!

I can't stop chortling at the image of Ez kicking it, Animal-style. =)

Also, I would cut a bitch to get my hands on some of that fudge. (But I might stealthily add a drizzle of salted caramel sauce to it, just for fun.)

Yeah, yeah, Jason. He's happy to hear it, glad to experience his beloved children growing in talent and ability...and HE GOES AWAY TO WORK. AmIright?
Actually, I understand the appeal of the drums. We have two pianos in the house, that my three boys regularly use to produce UNGODLY amounts of noise. And the other day a friend of mine posted on FB that she's getting rid of her piano, and i seriously considered taking it. It's a sickness.

Oh the drums...I married a drummer. On the plus side, he's good so at least it's got some rhythm, but on the down side he drums along with everything...songs on the radio, songs in movies, every.thing...at least he's past the drumming while talking thing...

You know, I don't usually mind the noise. Got Z a whole set: drums (not real, but Toys R Us or something), harmonica, tambourine, flute, maracas, castanets...he's a one man band (except when the girls join him and then they're fighting over the microphone.) I truly thought it'd get to me but it hasn't yet. Maybe it's because they leave me the hell alone when they're in band mode and even when I'm asked to join in all I have to do is follow the line and march, mommy!

Ike at the drums.... Just too cute for words.

Those are right up there with the emergency helmet my sister brought for her son many moons ago - with a red light and siren!

We got my then-2 year old a drum set last year - all the time wondering what we were doing. But I swear that after the initial excitement and racket, it becomes less of a novelty and more of a fun sometimes thing :) And it inspires many a jam session. The three year old on the drums, mommy on the guitar and one year old on the xylaphone - good times :)

And it's happy noise. I didn't mind how noisy my kids got as long as it was happy noise. Whining, teasing, screeching... that had to stop... NOW! But happy noise? Have it, munchkins.

I hope the boys grow tired of the drums before one of you snaps! Ha. My husband wants drums, nooooo way.

Only the most awesome parents let their children have drums. You guys rock!!

So cute. It's about time someone replaced the Jonas Brothers, no?

And lo, an angel of the Lord said "you are a bunch of damn fools."

OMG, you are so funny. Merry Christmas and happy birthday to you!

If they push you closer to the brink, you could go back to the music store and buy drum head and cymbal mutes. Might help them through some of the more painful practice sessions before they come around to something that resembles music.

Ike with the drums... good God. All three are adorable, but Ike -- I gushed. I did. Have to say, I read the title at first and thought you just about lost your doggone mind -- but you're not crazy -- a little nutty yes, but crazy no. You're awesome.

you cray cray and awesome.

Mm mm mm. I wonder where the good lord put our common sense at this time of year, don't you? I love drummers and know in my logical mind that they have to learn somewhere but please please please let it be far away from this mama.~!

My sister got my 21 month old a little kid drum set, he already has a snare drum. He loves it, especially the cymbal. We don't mind the noise/music:) He likes playing while singing MAMA! Yoohoo!(like Animal in Muppets' Bohemian Rhapsody on youtube).

The recipe is linked to the fudge name in the blog post. Silly me! Thanks!

Personally, I like the anal-retentive wrapping paper legend beside the tree. :)

Hello, first time posting long long time reading. Wy am I posting now you ask? 3 reasons. First is because I am all ALONE in my house. Second is because my "yay your alone gin and tonic" has taken effect. And third is because children and music instruments are the best! My hubby is a hobby musician and my brother is a genuine professional rock star. My 5 1/2 year old has had his drum kit since he was the belly. It takes time, but eventually they stop just pounding to make noise and really start laying down some beats. He now is writing some crazy songs on his guitar and we love it. Another positive, family music nights are much more fun when you can all rock out to the Smashing Pumpkins instead of a MIckey Mouse Clubhouse sing along.

Oh, fudge. Thank you for that.

Am I the first one to comment on your "wrapping paper key" posted for the boys. That is adorable. I do the "assigned" paper, too. Until I usually run out of somebody's and then it's, "the red are all Libby's. Except those reds, which are Dan's because Dan is green but I ran out of green. Just read the tags!!"

ADORABLE Ike on the drums! These boys will be rocking (your house down) for the next few days straight. At least until they're back at school, right?

There continues to be more similarities between Ezra and my son. He got a drum set too.

I noticed you made the unclear (wrapped up THINGS) a bit more clear to Noah by getting each kid their own wrapping paper. How smart!

Completely unrelated, but, your Ike and my Isaac could be cousins, they look so much alike. :-) Makes me smile every time!

They are so adorable!! Wishing you a happy new year!