Baby, It's Cold Outside, But Let's Not Be Ridiculous About It

Oh my God, this week. Fuck you, week! Get off my lawn.

I'm concerned I'm becoming one of those bloggers who starts off every entry with an apology/explanation for why they haven't been blogging, which: Shut up. You're blogging right now! GET ON WITH IT.

On Wednesday we had the terribly exciting pleasure of getting a new heating system installed in our house. Our heat pump actually died two months ago, but thanks to the mild weather (and occasional use of the emergency heat setting) we were able to procrastinate on the replacement until now. "Now" being when I heard Ezra matter-of-factly explain to a playmate that "the floors in my house are like ice-skating." OKAY FINE. YOU COULD JUST WEAR TWO PAIRS OF SOCKS BUT WHATEVER.

So of course, the day we finally scheduled the installation was the week the weather plummeted down to the mid-20s. Holy shitbags, was this house cold. The kids and I wore double-sweaters and basically stayed in bed under the covers all day until the new system was up and running. The good news, obviously, is that we have heat and are grateful and fortunate and blahhhhhh one single day without heat, boo freaking hoo, AMERICA.

The bad news is that goddamn, heat pumps are expensive and also letting Noah bring LEGOS into my bed was a bad call.

Yesterday, I spent literally MY ENTIRE MORNING on a post about the American Horror Story finale, which was supposed to be something funny and short and breezy and then (as these things always seem to go for me) went off the talky-run-on rails and turned into a damn research paper about Final Girls, Character Motivations & the Authentic Redemption of Self, With Bonus Zombies & Adam Levine's Chopped-Off Arm. Time well spent, I'm sure.

1,700-plus words later, I hit publish on that and then took all three children to the doctor for belated physicals. (We switched pediatricians which is always a seamlessly easy thing to do logistical paperwork nightmare.) Ezra and Ike needed multiple vaccinations and even though Noah didn't need any he wouldn't stop talking about SHOTS SHOTS SHOTS WHEN DOES EZRA GET HIS SHOTS and so I ended up with two kids screaming from SHOTS and one kid who was sympathy-sobbing over the SHOTS and Ezra apparently failed some fine-motor-skill milestone and Ike needs prescription butt paste and then Ezra ran away from me in the parking lot because SHOTS and...

...you know? I don't really want to talk about it anymore. Instead, here is a picture of Ike hiding under the exam table while wearing Ezra's Angry Birds hat. 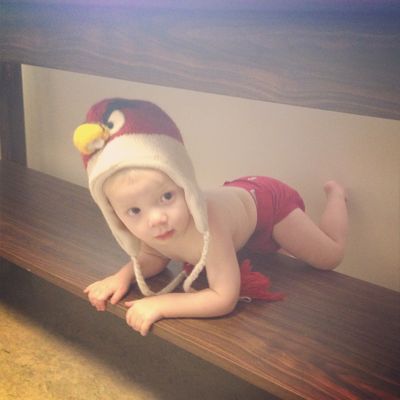 Today? Well. Today I am sick with a terrible cold, where my chest hurts and my throat hurts and my head hurts and all my sinus pockets (tubes? are sinuses more like tubes?) in my face hurt. And apparently we're going to get an inch of snow tonight so the entire DC area is all adorably panicked and the schools are sending everybody home early, which: GREAT, THERE GOES MY PLAN TO DAY-DRINK SOME NYQUIL.

Have a good weekend, everybody. Stay warm and may you not wake up to find LEGOS in your pajama bottoms.

Thank you for making me laugh every single time I read your words. We would be friends... :)

Thanks for that. Load up on some OTC drugs for that cold!

Oh, Amy! Legos in the pajama bottoms is the worst! See also: having a cold and responsibilities at the same time. I would tell you to take it easy, but that would probably jinx the universe to go wrong for you today, so enjoy the lower standards of a sick day today!

You know what? Go ahead and do that NyQuil shot with a bourbon chaser because: DAYUM woman.

Wishing you power (and heat) through Snowmageddon: the Maryland edition.

Yeah -- we were supposed to get that inch of snow here in my area (Lexington) of Kentucky this morning. Let's just say if I could show you a picture of what it looks like outside right now, with all that grass and a few specks of white - you'd laugh. I know I did. Schools all called off (which they should have because people in this city cannot drive when someone spits on the street), and I'm happy with the snow day because I'm a teacher and yeah... snow day woot! But just don't be surprised if that snow never happens at all - s'all I'm saying ;)

The day we moved out of our house, it was 12 degrees outside. The movers insisted on having all the doors open (to chuck out the furniture, I guess), my spouse, who is Japanese, insisted on helping them while wearing flip flops (because what Japanese doesn't love slip on shoes, even in the dead of winter?), and I was upstairs locked in a bedroom trying to keep our three-week old warm so I could feed her every two hours as she demanded, cold moving day or not.

Oh, and you should definitely buy a kotatsu, because it's the best way to keep warm in winter, by far.

Was the coordinating hat and diaper intentional, or happy accident?

We lived just outside DC for two and a half years when I was a kid. We moved between Christmas and New Years from Montana to Falls Church when we ranged from fifth grade to kindergarten. The first week we were in school they dismissed us early because of a "snow storm." We were so confused because you could still see the grass poking up through the snow, and we'd had two feet of snow on the ground in Montana and never got a snow day! We were so confused, and my mom had to spend a long time trying to make us understand.

AGH! Shots. We spent the yesterday afternoon at the pediatrician too. My 4 year old threw an epic panic attack/freak out over his flu shot while at the same time agonizing over his sister's 12 month shots and finger prick blood draw extravaganza. One wrestling move (complete with head lock and leg wrap) later, he turns to me and said "huh..didn't even hurt mom--can I have my chocolate now?" fucking shots.

Wow, what a week! Kudos to you for hanging in there amidst all that craziness. The weather here (Boston) has plummeted to horrifying temps too and I had to commute to work yesterday when the wind chill was -20 (Fahrenheit!). I think I'll move to Florida now.

Oh, the cold. I knows it well (mainly because Washington Gas is the devil). Our gas is usually turned off every year. I don't feel like explaining that right now, though, sorry. SHOTS

DC schools closed at 12:15 today anyway for stupid records day (seriously? Y'all can't record shit some other time?) and we, members of the great parents of DCPS, decided to not fool with the battle of getting up, getting dressed, going OUT into the cold and then turning around what, less than 3 hours later to bring them back? No thanks. SHOTS

LEGO. My butt. The boy has given new meaning to Eddie Murphy's put a boogie in your butt. Kinda makes you want a different kind of SHOT.

All hail liberal telework is all I have to say.

That and I hope you feel better soon!

Wishing you fun filled Nyquil dreams if you have a chance to take it.

Ugh, so sorry! Random trivia: pretty sure "sinus" means "cavity in your body." So a sinus is a sinus, I think? However, I did take anatomy a preeeeeetty long time ago, so. I just remember a doc telling me I had something in a "sinus" that was definitely NOT where I expected a sinus to be. I really hope everything turns the corner for you soon!

Re: Ike's bottom - Earth Mama Angel Baby Bottom Balm. Fo reals yo. That junk can make the worst antibiotic poop induced rashes virtually disappear in a few hours. Amazon carries it for $9 or you can shell out the $15 at Whole Foods.

P.s. We got 6 inches of snow the other day where I live, and 2 more today, so people panicking over 1 inch of snow makes me giggle.

Ugh - legos in bed sounds awful. One time me and the girls (3.5 and 2 at the time) were getting flu shots and I had to slip my arm out of my shirt to get my shot, and Beezus (3.5) ran out of the exam room and down the hall to get away from the shot. I chased after her forgetting my arm was out of my sleeve and exposed side stomach to the waiting room in the process. Thank god I didn't expose my boob and granny bra !

And yes, I live in the Washington area and was COMPLETELY PANICKED over the 1 inch of snow forecast for the afternoon !

Um, temps in the 20-degree range?? I'm looking FORWARD to when it WARMS UP to the 20 degree range.

Now pass me my down socks.

Glad you've got your new heat all set for the BIG SNOW...from Michigan, and finding this all so funny!

Snow is the devil. San Franciscans admire snow that we can SEE on the Sierra so far away. I never learned to drive in that white stuff--what with moving to Fort Lauderdale when I turned 15 (I know-first world problems again)...

We were blazing about today in 65 degrees of perfection for a sunny January day. My heart goes out to all you winter-living-loving folks.

I hope you feel better. And may your pajamas be Legos-free!

gDiaper covers FTW! Well, actually I hated gDiaper covers with a fiery passion but they are crazy cute (have you seen the plaids they had recently? Lurve) and totes easy to accessorize. I attempted a photo shoot with a 1 year old wearing a red gDiaper and a rakishly oversized Santa hat... it was a great idea in theory!

I'm impressed that you are brave enough to take three kids to the ped at one time - I have done it twice in my 4 years of parenthood and always vow NEVER AGAIN - because, well, shots.