Home Archives About Subscribe Advice Smackdown Tip Jar
The Ike Formerly Known as Baby
Baby, It's Cold Outside, But Let's Not Be Ridiculous About It

It was a very Ezra weekend around here, and yes, I AM using his name as an adjective in and of itself. That's so Ezra. What an Ezra shirt you're wearing. This soup tastes Ezra-y. EZRA! 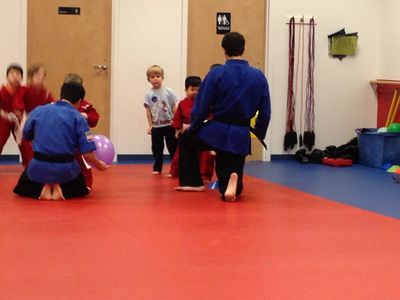 TA-DA! He did great and he loved it. So congratulations! You now officially get to spend even more of all of your money on goddamned karate classes. Blark.

On the other hand: 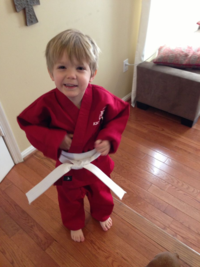 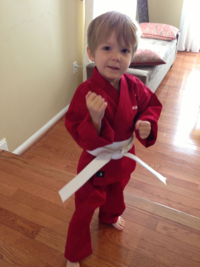 On Saturday, we had some friends and their children over for dinner, so it was time for a minor costume change. 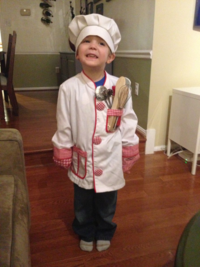 Complete with the revolutionary accessories of the day: 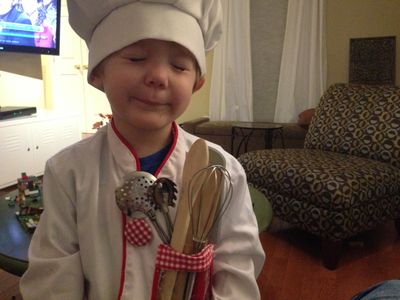 Several hours later, Jason and I struck upon what seemed like a great game for motivating the end-of-the-night playroom cleanup: The Zombies Are Coming To Eat All The Toys On The Floor. I did a pretty convincing zombie shuffle and moaning bit when I went downstairs to check on their progress, as most of the kids shrieked and laughed and frantically hurled toys back into baskets as I approached.

MOST of them, that is, except for poor Ezra, who I found hiding under the wooden train table, wailing in abject terror. Win, you guys. Am such an ass.

I think I made it up to him on Sunday, he and I attended a classmate's birthday party at Build-a-Bear, which I did not know was a thing you could even do, like oh my God, why not just have your party right in Disneyworld, or in a candy store on the moon? 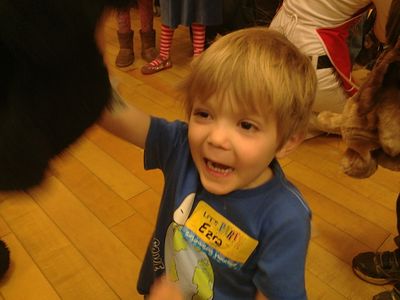 (I am turning 36 this year. Please RSVP if you would like to attend my birthday party. It will be at Build-a-Bear.)

The whole way over to the party, Ezra was adamant that he didn't WANT to build a bear, he wanted to build a rabbit. Being mostly unfamiliar with the Build-a-Bear party parameters, I tried to prepare him for the possibility that a rabbit would not be one of the choices, and also: DUDE. YOU SCORED AN INVITE TO A PARTY AT BUILD-A-BEAR. DIAL BACK THE DEMANDS, OKAY?

When we arrived, it turned out a rabbit was an option. 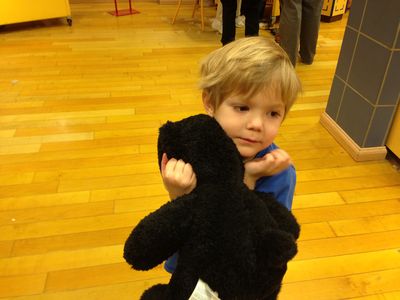 So naturally he chose a bear.

The kids were also allowed to choose an outfit, because WHY NOT, LATER WE'LL MAKE IT RAIN BUBBLEGUM FOR Y'ALL TOO. The party host held up a karate uniform with a variety of belt colors, which made me irrationally excited because it was so tiny and cute and guadruple-zero and gaaaaahhhhh wantwant. Wantwantwant.

So naturally he chose the football uniform, despite never 1) playing football or 2) watching football or 3) being at all aware of football's existence prior to that moment.

Whatever, everybody knows the best part of Build-a-Bear (besides EVERYTHING) is the box you get to take your toy home in. 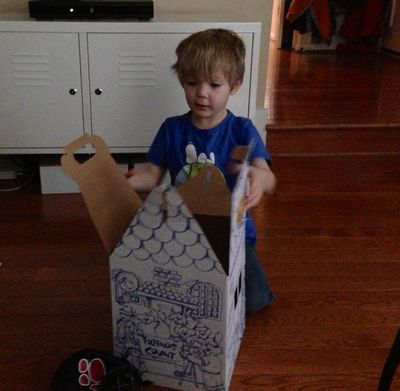 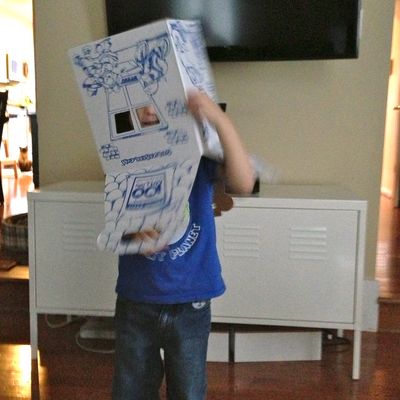 In conclusion, here is Ezra doing his best Maru impression: 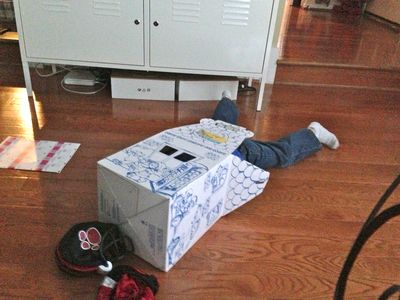 Which is just about the most Ezra thing he's ever Ezra'd.

P.S. After hitting "publish" and checking out this entry live on the site, I realize that there are Build-a-Bear ads showing up in the sidebar. Those are just network ads tied to any keywords that get detected (or possibly browser history and/or dark magic, I don't fully understand how it all works). But I now feel the need to clarify that this post was NOT sponsored, AT ALL, and that I received no money or free tiny karate pants from the Build-a-Bear people. SWEARSIES, carry on, etc.

I adore this kid.

Oh, Ezra! You make me look forward to my little one getting bigger!

My son does the Ezraest robot impression with the build-a-bear box... and the box usually outlasts the bear in interest points. On a side note, how big is Ezra? I seriously concerned that my 20 month old son is the same size as your Ezrasize Ezra. I've got a fully grown hobbit apparently. EZRA!

I love the name Ezra, it's my oldest's middle name.

@Ligouri Ezra's a bit on the small side, at least compared to his brothers, who are all 99 PERCENTILE THIS, BITCHEZ. He's 35 pounds now, though I have no idea where that puts him on the percentile chart. He went from my smallest newborn to my absolute fattest blob of chub and then back down to average again so I can't keep up with all, frankly.

Point is, Ike is almost 20 months and already wearing 2T/3T clothes. NONE OF IT MAKES ANY SENSE.

Oh, this is just awesome!

WTH, I only see ads for butt paste. Not cool google.

Ezra is so cute and looks just like you!

We still have the motherfucking box from the Build a Bear birthday purchase from October. That trip cost us $60 (Australian). Who can afford to do that for a kids party?

I would like to have a band and name it Free Tiny Karate Pants.

ZOMBIES???!!!! How dare you chase poor, helpless children around like that! Oh, but it worked so well and you are now the coolest Mom ever according to some kids that I happen to know. Um, love you guys!!!!!

Ezra in a karate uniform. I just died.

Ezra as an adjective, that's pretty awesome. I may have to start using Logan as one. I just Loganed my face (slammed it into any available surface the day before a visit to the doctors) I Loganed my lunch (fed it to the dog) I could go on and on...

Yeah, Loganed would be a verb. Oops. Pregnant brain for the win. Just don't tell any of the kids I teach English too :S

We must pick up toys before we go to bed least they toy monster take them. Works for us!

Gah! Evil genius, Wendy! Ima gonna tell the wee one that the toy monster will steal all his toys tonight, unless he puts them in the toybox. And if the little snot refuses, you can bet your Ezra'd ass I'll be up at 4 in the morning, stuffing trash bags & hiding EVERYTHING. Bwa ha ha ha ha ha ha!!!

I believe you. I'd want people to know I paid for that, y'all, because Build-A-Bear prices be high as a giraffe's ass! (Do they have giraffes you can dress up? You know, after you've gotten a little tiny heart that they SEW INTO YOUR ANIMAL IN FRONT OF YOU WHAT IS WRONG WITH YOU ANIMALS).

And just now as my most irritating coworker was attempting to yet again IRRITATE ME, I thought, I'm about to Ezra the shit out of you. And then I smiled. Sure, he probably thought I cared about what he was saying, but I was just enjoying the little visual I'd created for mahself in mah head. Ezra-chop!

That last picture is totally me as a kid and probably now. I love Build-A-Bear.

If that was an actual invite I am totally RSVPing to your Built-a-Bear birthday party.

Is it wrong that he's still my favorite? Because, oh, the Zah.

My four year old is 35 pounds too, which puts him in the 50th percentile for weight according to pediatrician's chart. So Ezra is probably closer to an average size than his giant brothers.

Oh, that kid. He really IS the Ezra-iest of all!

I am turning (*whispers*) thirty (*gah*) this year, and will gladly have a joint Build-a-Bear party with you.

I will even let you dress my bear in the wee karate uniform because then I get to keep it hahahahahaha.

Omg omg omg I wanna come to your party! Except I live in Holland. Boo.

Promise, I'm not a rep, just a Girl Scout leader that has used this company many times:
http://www.fillafriend.com/
It is an at home Build-A-Bear experience for much, much, much cheaper. It is easy for kids to do with lots of options (critters, outfits, sound boxes, etc.)

(nothing) BETTER THAN EZRA

I ugly giggled all through this. You Ezra'd the crap out of this post.

How spectacularly Ezra! Lucky boy this weekend. I want to live in Ezra-world!

I will totally come to your Build-a-Bear party. My kids never pick the ones I want and I WANNNNNNA PLAAAAYYYYY TOOOOOOO. Ahem. BTW, BAB offers a great Girl Scout workshop and I bet they have a Boy Scout one too.

Karate Ezra and Baby Yoda Ike: I'll take one of each, please!

Real question:
Do they serve drinks at Build A Bear? Otherwise, I say go for the at-home version and add wine.

The Husband and I went on a date to Build-a-Bear. Last year. When we were 32. They make you do horribly schmoopy stuff like kiss the heart going in the other person's bear. It was fantastic. I'd be down with a birthday party at a place like that....

@Lauren That is so awesome. I officially love you and your husband. And Build-a-Bear. Maybe if I type the name enough times they will take notice and send me some free tiny karate pants. Build-a-Bear!

Ezra is just so cute in his little karate outfit!

I would totally attend a grownup birthday party at Build-a-Bear.

Also, Amy, I'll try and win the lottery in time to go to your birthday party, when Ezra will want to build-a-ewok :)

I would love to go to you Build-a-Bear party!

And FYI, the ads are targeted to you based on your browsing history using some complex algorithm I don't fully understand. That's why you see ads that are different from what I see (Chromebook, incidentally).

It is always the cool uniforms that gets the kids interested in the classes to begin with. If you took out the uniform then no kid would sign up for classes. It makes me laugh.

I USED TO WORK THERE and I loved it everyday. Nobody believes me BUT I DID.

I love the chef outfit.He is adorable...well, all your children are and I enjoy reading about all the things they do. It just brings me back to when my kids were little!!

Wait, I don't understand why this child has clothing that is not a mini-chef outfit. MINICHEF ALL THE TIMES.

Seriously, I want to borrow him for dinner parties. So if you're in the Philly region (don't you or Jason have family not too far away), please feel free to drop him off.

PS, now just looking over the costume, I do realize that pants are required for the mini-chef...but it's COLD, so I guess karate outfit plus chef's outfit and he's good to go right? You lemme know when you're dropping him off.

He's wonderful. Tell him that I get the Attack of the Shys all the time.

We just had a B-A-B party for my son & it was TONS cheaper than anything his friends are doing. You can, of course, add on tons of stuff which brings up the price, but our gang seemed fine with the limited selection (ages 2-6.) They had so much fun AND I was impressed that they could keep that whole age range of kids entertained. It was such an easy party for me. :-)

Can I come to your Build-a-Bear birthday party?
Also, Ezra is the coolest Ezra who ever Ezraed.
I love the Maru impression!
Also, the chef outfit ohmahgah squeee!! :)

Teh Cuteness! Too! Much! Can't! Handle!

Hello! you have a beautiful blog. I like your pictures, you have a sweet boy. have a lovely weekend :)

Tiny karate pants! Hee!
And Ezra doing his best Maru impression. Double hee! In fact, I let out a shriek of giggles at that point. (I'm old enough that I get double points of hilarity when I actually recognize a pop meme.) Yes, make like Maru, Ez. Too funny!