On Being Outnumbered, Part Whatever (Of A Never-Ending Series)

In an oddly convenient coda to yesterday's post, last night I got a flu shot while my children watched. I wanted to show them that no, really, shots aren't a big deal. It ended with me almost saying the f-word in front of them, because DANG THAT HURT LIKE A MOTHERHUGGING CHEEZIT CRACKER.

ProTip: RELAX your arm. I forgot to do this and remained coiled up and tense, probably since I was so intent on bracing myself to display absolutely no facial reaction at all, because I was trying to be a badass in front of Noah and Ezra and, in retrospect, set up dishonestly high expectations that shots don't hurt at all, when everybody knows they DO hurt and now the next time they get a shot it will further erode their trust in me, forever and ever amen. WINNING!

But listen: When I took them for THEIR flu shots a few weeks ago, there was so much goddamn sturm und drang over it — I'm talking children hiding under waiting room chairs while wailing for someone to help them, why won't someone helllllllp them — that I finally turned sweetly to the receptionist and asked that she instead put us down for two of the nasal mists, please. Then I pretended like I didn't know them for awhile, until our names were called. Hello! Look at this adorable and oblivious toddler sitting on my lap! This is mine! Just this one! Those other two might look a lot like him but I dunno. I think I saw them come in with a pack of wolves. Their packmaster must be getting his parking validated or something.

Hmm. I am suddenly aware that a lot of my recent jokey-jokes about my children are possibly making it sound like we are some kind of traveling circus of feral dogs, which is of course not true. They are splendidly behaved most of the time, capable of eating out at restaurants with napkins on their laps while discussing that day's events ("and so I says to Peter I says, it's MY turn on the swings, ol' chap"), or navigating the grocery store without knocking anything over, provided you're generous with the free cheese samples.

They're just, as Melissa McCarthy said in Bridesmaids, a lot of energy to deal with. So very much energy, both good and bad. They feed off each other, too: If one is hyper, the whole gang is running around screaming for no real reason before you know it. Three-child pile-ons happen at an alarming rate, usually beginning as "group hugs" and quickly escalating to something more like I LOVE YOU AND AM THEREFORE GOING TO SQUEEZE THE SHIT OUT OF YOUR ESOPHAGUS. And if one of them is anxious and decides that a flu shot = murder, well. You've seen 28 Days Later, right? It's like that, only less bitey and more 28-secondy-er.

When they reach that point I usually separate them and send each boy off to his favorite activity (Noah = Legos, Ezra = play kitchen, Ike = chalkboard wall). And then they have the audacity to act like this is a PUNISHMENT, being forced to leave each other alone just seconds after they were all howling in rage because touching! Bothering! Bottom-of-the-brother-pile-ing! Moo-ooo-om! Make him stop! But not really.

Anyway, I am at a loss as to how to tie this entry together for a satisfying conclusion. (Flu shots! Profanity! Wolves! Boyfights!) So instead, let's just send all these disparate points off to sit in their disparate corners. We'll stay over here with Ike at his chalkboard wall mural and pretend he's the only point we brought up today. 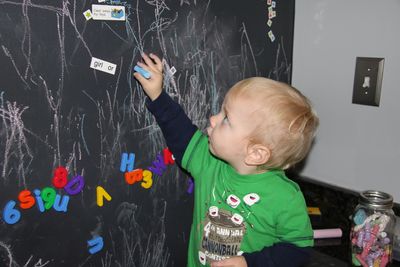 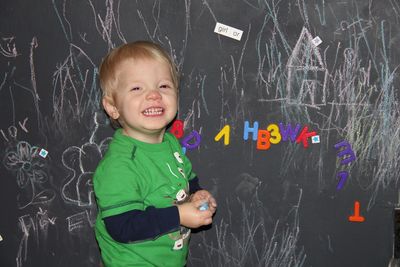 Note to self: get a damn flu shot already. Sorry, darn flu shot.

Ike and Ezra have the same big 'camera' smile. Luv!

I have a question for you (that might make a good blog post maybe?). Have you had Ike's hair cut? He's only a couple months older than my son, and they seem to have similar amounts of fine, blonde hair. It's getting to the point with our son that a little trim of a few odd ends might not be a bad thing...but he still doesn't really have a full head of hair and I'm not sure what exactly I am supposed to do.

Did you get the smaller, intradermal flu shot? It was all my doctor was offering this year.. and ya, it HURT. I wasn't expecting it to, and couldn't help but let a surprised "OW!" slip out. Glad my children weren't there.

Oh welcome to my world- just with girls. All the same ages of course. I know I feel the same way too- as if we are a pack of feral cats. Three kids is basically a bag of cats if you ask me. Crank-deprived cats needing a fix.

I was going to mention that in the last pic Ike looks like Ezra, but someone already did. My sister asked me once, "do your boys know how to walk?" So I ask you - do yours? hahaha

I absolutely let my kids get the Flumist every year. Why give them a shot if there are other options? On the other hand, I prefer the shot for myself. The nose gel freaks me out.

This is my life, but with girls! At ages 4, 4, and 2 there is so much energy and OMG the volume level. I really just started taking all 3 of them to the dr without my husband's help. And I regret it every time.

I took a friend with me last year to get my flu shot. She is afraid of shots, I thought I'd show her it was no big deal. They stuck the needle in and blood squirted out across the table. It HURT. I couldn't help but shout, and she's still traumatized. This was also the day before my brother's wedding, in which I was a bridesmaid. I had a 4-inch black bruise for the wedding. Those needles freak me out.

@SarahB Nope, no haircut for Ike yet! He really doesn't have enough yet. The front isn't growing much and the back has one small mess of blond ringlets that I won't touch until we're in full mullet mode. And even then...maybe not.

How can that be Baby Ike? HOW?

That's an awesome "Look, Mommy, look at my scribbles which are probably deeply important and either solve major philosophical conundra or completely redefine the foundations of mathematics" smile.

Or, you know, CHALK.

flu shot - hurts like nothing else if you ask me! Of course I continue to torture my children with it v. the nasal spray because I am "immune compromised" and the spray is a live vaccine. Tough noogies kids!
3+ kids - yeah we say it's like herding cats. There was a year when the youngest feral cat was newly potty trained where I seriously had to have a note on the door reminding me to send everyone to the bathroom because I wasted more time loading every into the van/car seats and then unloading them for the bathroom.

Thanks! We're in the same boat with the front not growing as much as the back. It's starting to get a little "business in front, party in the back" especially if he's wearing a collared shirt, but I just can't bring myself to trim it.

What a big grin on Ike's little face! I love this age so much.

My three are 8, 5, and 2, and although it's loud (so, so loud), I am actually loving this stage because when they do play well together, it's like the angels are singing, and I don't have to keep yelling "Don't step on the baby!" anymore. But Oh. My. God., wrangling three kids by myself when we go out somewhere is a freaking nightmare. My husband took a new job three hours away, and we stayed behind while we sell the house. He comes home every weekend which is great, but we really should go down there more often to get to know our new home. But that means I'm alone with three kids in the van for three hours and we have to stop and eat and go to the bathroom and it is horrible.

Say, does anyone here want to buy my house so I don't have to take all three kids into a public restroom by myself ever again?

Your stories/rants crack me up! I can SO relate (only minus one man-child), and as we contemplate adding a third to the mix, I know I will be living your life. Thanks for giving me a preview.

look at that chalk-grip. JUST LOOK AT IT. genius, i say.