Home Archives About Subscribe Advice Smackdown Tip Jar
On Being Outnumbered, Part Whatever (Of A Never-Ending Series)
Ezra the Ezra-iest

The Ike Formerly Known as Baby 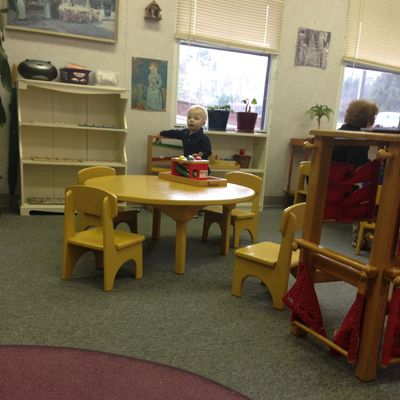 Oh, nothing much. Just my baby checking out his new preschool. 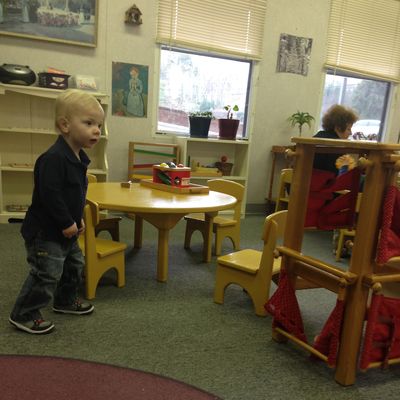 It is true. My baby, who you may recall I just gave birth to all of five minutes ago, is starting preschool.

Our childcare woes are very close to being almost-solved: A wonderful part-time nanny will start working for us in just a couple weeks, for three days a week. Ike will attend the toddler program at Ezra's (wonderful, oh-God-we-love-it) Montessori school the other two mornings.

Technically, it's a two-year-old program, but they will accept Ike at 20 months (February 1st). I don't know if this is standard practice or if they are making an exception because they loooooove us and because Ike is amazing and awesome and the size of a two-and-a-half-year old already...or because I begged and they felt sorry for the crazy-eyed lady who just spent a morning apologizing for all the shrieking during multiple conference calls.

(It was rough going there for awhile, you guys. Occasionally the shrieking even came from one my kids!)

This morning I took Ike over for his official classroom visit, something I've done with both Noah AND Ezra at this very school, when they were closer to three. And while THEY both behaved like possessed pinball machines the entire time (running! touching! toppling! defying! No, I don't want you to show me something, I just want to DANCE!), Ike was the most perfect brilliant little angel who ever angel-ed. He played quietly with whatever the teacher directed him to, he observed the other children without getting all up in their business, he colored a picture and demonstrated both his awesomely advanced crayon grip* AND said "yes" at least a dozen times.

It was sweet and wonderful and happy. And absolutely the end of Baby Ike.

His brothers have stopped calling him that, all on their own. I thought it would be a hard nickname to shake, but...well. Look at him. He's still got the padded diaper-butt and his little mass of baby curls on the back of his head (while the rest of his downy-blond hair refuses to grow, sparing me the agony of the to-first-haircut-or-not, so far), and his hands are still too knuckle-dimpled to look like "real" big boy hands. But he's not Baby Ike, he's Toddler Ike, which just isn't quite as fun to say, so...Ike. Just Ike. 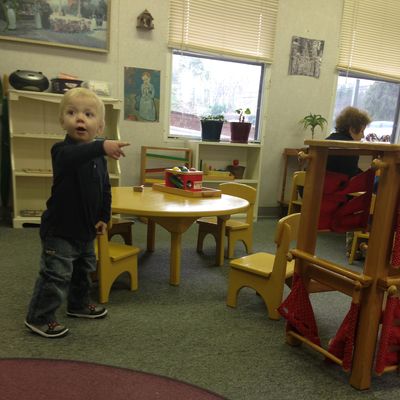 Ack. This kid. I just love him so much I can't even take it sometimes.

*Yeah, I did just brag about my toddler's crayon grip. Look. When you're dealing with a small, stubborn human who still craps in their pants, you get your sources of pride in weird places sometimes. IT WILL HAPPEN TO YOU TOOOOOOO.

When the heck did he stop being a baby? My word!

And if that's my reaction, I can definitely understand yours as the mother to this adorable kid.

If I was local, I'd definitely take you out for a breakfast with mimosas after dropping him off the first day. I think you'll need them. :)

Ok, my 3 boys are within 6 months of yours. I am getting major baby fever- my husband is happy with the 3 and thinks I may be losing my mind. Do you and Jason discuss this? Do you think I am losing my mind? My word, Ike is just a doll, hard to compete with your other cuties, but he sure holds his own!!

I thought you just had him! Not possible. I won't accept he's not a baby any longer.

Impossible. (Also, interesting, since our nursery school can't take under-2s unless they come with their own carer all the time until their birthday. Is yours a daycare too? Must be different rules.)

@sarah b You know, the other day Jason and I were out at a restaurant sans-kids and spotted someone's tiny baby girl in a carseat. And no lie: We both got a little schmoopy over her and there was definitely a twinge of baby-GIRL-envy. But then we snapped back to the expensive, tiring reality that we are done.

Basically, we would probably keep having babies every other year quite happily, except for the fact that I'm pretty sure neither of us is at all that interested in having any more KIDS. (Plus, whatever. You just know I'd have another boy and that's...wow. That's a lot of boys.)

Can I make a request for a future blog? Can you talk Montessori with us please? I am interested in why you chose it for Ezra (and now Ike, yay Ike!) over a different type of preschool, what the benefits and drawbacks are, what changes you have had to make at home and what benefits you think it offers. I am asking for purely selfish reasons as I have 9 month old twin sons and a Montessori school attached to my church.

I said "benefits" twice, what I mean to say is whether you can see changes in ezra that you think are directly related to his school, etc. I dunno, just talk about it please!

What kind of newfound bullshit is THIS? You can't MAKE me stop calling him Baby Ike. Just because he's all I'm Not A Baby, I Go To School doesn't mean that I have to accept it.

I'm so sad. I've been following Ike since he was a newborn and I was newly pregnant. He and my (baby. Still baby.) boy are almost exactly nine months apart. So. This is what's coming? Oh my.

ZOMG HOW HOW IS THAT POSSIBLE?! Can it even be safe for basically newborns to get up and walk around like that?!

My little guy was born about a month and a half after Ike, and I'm in the same "where the crap did my baby go" boat. He's big and giant like Ike, too. But he does not yet have the awesome crayon grip. Sigh.

And I didn't realize till I flipped back through your archives that you had cholestasis (or probably, anyway) with Ike. Cholestasis can Bite Me. It's why Caleb was born three weeks early. It also explains why my last couple of months of pregnancy felt like his butt was permanently tucked into my ribs, even when I could see/feel it somewhere else too and I was kind of scared that my kid had two butts and nobody wanted to tell me. Wasn't him, it was my liver. Oops.

Sigh. It comes so fast! My baby, who is 22 months now, is almost completely transitioned into the 2's. Not the baby room any more :(

Ehrmagerd....Montessori is the BEST thing since effing sliced bread. And Ike rocks. That is all.

Awww, my heart aches for you. My son is 15 months and I'm dreading the day when all the "baby-ness" is gone. Be strong momma...they'll always be your babies!!

THAT is what my husband says! You don't want more kids, you want another BABY. Big difference. I may have to refer back to this on a monthly basis when I get a wee bit hormonal weepy mess. Thanks for your perspective.

OMG, the cute little boy pants and sneakers and face and ...

It is funny you mention his crayon grip. I was going to comment about the excellent grip in the picture of him at the chalk board yesterday, but it seemed off topic.

You posted a picture of him writing on the chalkboard wall the other day...I noticed his grip on the chalk then. It really is something to brag about. How did you get him to do that?

I was kind of scared of my co-op's toddler program, until we actually started going to it. It was so much calmer than the preschool room! Ike will love it, I'm sure. And I am totally going with the " know the family, know the kid" reasoning. They've heard shrieking before.

How can mah baybee be so big already WAAAH! Yes, I know that, technically, Ike is YOUR baby. But, I am an Internet Auntie and omg, he's SO BIG! And cute. Still the cutest.

We are doing the exact same thing here, even down to the Montessori. How is it possible that these damn kids grown up so quickly!?!

I have a four year old who still holds her crayon in her fist if she's not constantly reminded to hold it properly, so yeah, the almost-2yo who's had a proper grip for several months now has had multiple pictures taken of said crayon grip because, wtf, they can DO that????

But mostly I am impressed that you can get a pair of jeans over a cloth diaper, a feat I have not been able to achieve with either of my children. They wear stretchy pants every day, because the diaper fills their pants so much, I can't button a pair of jeans without cutting off their circulation.

"ZOMG HOW HOW IS THAT POSSIBLE?! Can it even be safe for basically newborns to get up and walk around like that?!"

When I read this comment I laughed so hard my husband GOT UP to see what was on my monitor. Of course I had to explain why I was laughing so hard but OMG that's a fugging hysterical comment. I had to go read her blog and subscribe to it too. Thank you for the morning riotous laughter.

Those are really cute shoes! Where are they from???

so sad to realize that Ike is no longer baby Ike, but because your boys are now BOYS... maybe they will enjoy going here. http://florida.legoland.com/ esp w/ their lego addictions. :D (just saw a news article on it.)