The Adventures of Superblogger & the Underpants of Mystery

Little boys (and some girls) and superheroes. I've heard it can be quite a thing. Noah never got "into" superheroes — we've burned through Star Wars, Star Trek, Harry Potter and Ninjago pretty bright and hard, but the traditional comic book heroes have never interested him all that much. He liked The Avengers. He liked it pretty okay. (Teenage Mutant Ninja Turtles, on the other hand... Which: OMG. I already had to live through years of every boy in my elementary school talking non-stop about those stupid turtles, and now you're telling me I have to relive it all over again with my own child? Haaaa, yeah, Michaelangelo sure does love pizza. It's crazy! Great to see so much character development has occurred over the past two decades.) Ezra has never seen The Avengers. Or any movie or TV show involving Superman, Batman, Spiderman or any of the other major or minor mans. And yet an full-blown superhero obsession has emerged, either through peer pressure or osmosis or electromagnetic waves in the atmosphere. It started with a Superman shirt, hastily plucked from a clearance pile at Old Navy because it was blue and Ezra was going through a fairly stubborn... Read more → 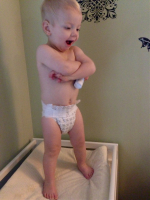 This post is sponsored by The Honest Company. Deep, dark confession time, you guys. I mean, be prepared to have dozens of illusions and dreamy dreams shattered. Right now my baby is wearing a disposable diaper. And in an hour or so, I'll probably take that one off and put another disposable diaper on him. Just cuz. And I won't feel bad about it either, so there. DUN DUN DUUUUN. Okay, so let's back up: Last summer, Ike developed a rash. And I mean a rash as in a R-A-S-H-H-H-H. I will spare you (and my poor kid) a description of said rash, though I am pretty sure you can Google around and find pictures of something similar and then NEVER SLEEP AGAIN. It was horrible. I took him to the doctor, who mostly just shrugged because she was jaded and hard and going to medical school is probably a lot like Google Images only all the time. She recommended some over-the-counter creams and a slathering of Aquafor or Triple Paste, which I obediently purchased along with a package of disposables. I used the creams. I used disposables that leaked poop and exploded overnight, covering poor Ike in that disturbing... Read more →

Dispatches From the Living Room of Sodor, Part Two

(Because of course when I said "tomorrow" way back on Thursday you know I actually meant "Monday" because I love to cause confusion and delay and also toy with your semi-half-interested emotions. I wish I could express that all in charm bracelet form.) After Noah got back into the track-building action, there was a brief shining renaissance in the new and improved Sodor. Once again, getting from Point A to Point B involved crossing over an insane number of bridges and lots of going in circles, but the people liked it that way. They also seemed fine with the fact that "Point A" and "Point B' didn't really exist either, because going specific places is not the POINT. The POINT, of course, is to chugga-chugga around in endless loppy circles for no damn reason while the nearby giants squabble over the blue train and the red train and the green train and the OTHER blue train that's mine THAT'S MINE THAT'S MIIIIIIINE MOOOOOMMMMMMMMMM. Of course, you're going to have to take my word for it about that renaissance, because by the time I returned to take pictures everything had promptly gone to shit once again. Floors are the new train... Read more →

Dispatches From the Living Room of Sodor, Part One 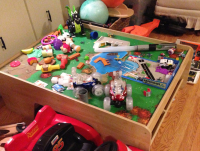 But first, a WHAT DA FUQ IS THIS FAQ: Q. WHAT DA FUQ IS THIS? A. Once upon a time, back in 2007, I purchased a train table and some Thomas the Tank Engine sets for Noah. And then proceeded to go on a three-day bender of obsessive track building. You know, for "my kid." For his "benefit." In order to prove that I was not losing my mind at all, not even a little bit, I posed a bunch of trains and cars around the track and wrote a little photo-essay about them. The trains all cursed a lot and Sir Topham Hat was an alcoholic. Q. YOU'RE WEIRD. A. Oh, you don't even KNOW, Janet. You don't even KNOW. From there, things got even weirder. Our train table started to become a catch-all surface for toy clutter, and Noah tended to bring other non-Thomas toys into his train play, like dinosaurs. I found this innocent bit of plaything dissonance to be HILARRRR and made up another story about it all. Q. OKAY. AND? A. One time I built a monorail. Q. WOW. AND? A. And another time school got canceled for snow and things got even more baller.... Read more →

Posted at 11:14 AM in breathtaking dumbness, Sodor Tales | Permalink | Comments (30)

Not Coming Soon to a Bookstore Near You: The 'Don't Be a Selfish Asshole' Guide to Parenting

The Good News: Thanks to you guys (who are awesome) I now have (at least) 100 different topic suggestions. Thank you. Y'all gave me both the poke-her-brain-with-stick-ing that I knew I needed AND the nicey-nice pep talk that I didn't. (Know. That I needed. But I guess I did. Oy, this post is already not going well.) The Bad News: WHERE TO START WHERE TO START THIS ONE THAT ONE OMG MY BRAIN IS BUBBLING OVER WITH UNBRIDLED OPINIONS AND WORDS AND IT'S LIKE MY INTERNAL DIALOGUE IS STAMPEDING ITSELF. I should probably export the comments into some kind of spreadsheet and treat them like Actual Real Writing Assignments or a task list that I can smugly check off once I've written something. (Smugly only because I am never NOT kind of smug when I check something off a to-do list. Take that, list, I am super awesome and productive. For this brief shining moment, anyway.) One topic I saw mentioned sevvvvveral times was the whole "giving each member of your brood the individual attention they deserve." I especially liked how Kerry phrased it, when she said "it seems like you find a nice balance between precious individual snowflakes and... Read more →

Okay. Let's just start typing and see how this goes: I am burnt the fuck out, you guys. I suspect that doesn't surprise many of you; after years of writing-writing-writing hundreds of words here five days a week about everything-anything, my output here has noticeably slowed. Whereas before I would simply stare at the blank page and force myself to write something, and was fine spending a couple hours mashing that something into submission of NOT ALTOGETHER SUCKING, lately I've been coming here and if a topic doesn't pop (fully formed, with an outline and several bullet points) into my head within 30 seconds I'm like: Nooooope. Maybe tomorrow. And before you rush to the comments section all GIVE YOURSELF A BREAK WE UNDERSTAND, let me assure you that I am definitely 100% giving myself a damn break about it. I do not feel guilty or panicked or ZOMG MAH RELEVANCE IS FADING about it at fucking all. Dish, please. I have three children who constantly need things or rides to things or want to talk to me about all the things. I've somehow fallen ass-over-teakettle into a consulting career that demands a lot of hours, hours that I am... Read more →

Yesterday was the 16th Valentine's Day Jason and I have spent together. Sixteenth. Shortly before our first Valentine's Day together, on our very first date, this happened: You can read the full story behind this newspaper clipping here. Highly recommended reading, especially if you've never dug that far back (2005!) into my blog archives. I would love to say oh, isn't it funny how much I relied on CAPS LOCK and run-on sentences for humor back then, but that would probably spark some kind of existential "LOOK AT YOUR LIFE. LOOK AT YOUR CHOICES."-type crisis that I've been yammering on for over nine years and have still not managed to grow as a writer in the slightest, and it's only 11 am and thus too early to start drinking and hurling glasses at walls because I CAN'T QUIT YOU CAPS-LOOOOOOOOCCCCCKKKK. Short version, though, for anybody who ain't got time for that: On our first date (that I did not realize was a date), Jason suggested we try to see the newly re-released version of the original Star Wars, even though he knew full well it would be sold out. (Thus "forcing" us to buy tickets for the following weekend, thus... Read more →

Playtime at the Thunderdome 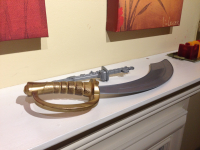 Quick! Describe the sibling relationship going on in your house right now in one word: BEATINGS. Now describe it in five words: SERIOUSLYBEATINGS. ALL. THE. LIVELONG. DAY. No, I am not beating my children. I personally engage in zero beatings or beating-type behavior with them. They beat on each other. And poke. And pinch. And punch. And leg-wrestle, which is boy-speak for "We're really just kicking each other, but it's okay because SPORTS." Over the weekend Ezra bit Noah in the middle of Target — bit him so hard that Noah had teeth marks on his arm through his winter coat. As far as I can tell, he bit Noah simply because he'd been pretending to bite Noah for awhile and that game got boring. (Dear Noah: HE LEARNED IT FROM WATCHING YOOOOOUUUU.) They antagonize each other constantly. They demand that the other "leave me alonnnne" and then are up in each other's grill 10 seconds later, playing full-contact tug-of-war over a toy, a throw pillow, a goddamned broom. Ike only wants to play with Ezra. Ezra only wants to play with Noah. Noah only wants to play with Ike. There is no overlap or compromise to that flowchart; only... Read more → 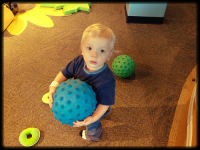 Noah called me 'Mama' until he started preschool. That child never once sat still for circle time or completed a craft project without protest — and I'm pretty sure his only interaction with most of his classmates involved throwing things at them — but he still managed to somehow absorb the message that 'Mama' was for babies. He was calling me 'Mommy' within a couple weeks. Ezra never called me 'Mama.' I was 'Mommy,' right from the start. I figured Ike would be the same, especially since he's been taking his sweet time in calling me ANYTHING. By the time he chose to acknowledge that I have a name, that I am a PERSON with FEELINGS beyond LADY WHO WHAT BRINGS ME ALL THE FOOD AND CHANGES MAH PANTS, I assumed he'd be past the 'ma-ma' pronounciation and would call me what he hears his brothers say. Christ, he calls Jason 'Dad' most of the time: He might very well just go straight to 'Mom.' Such a small, stupid distinction, but I admit: I was bummed at the thought of never being 'Mama' again. I always wished Noah had stuck with it, like I always wish we were more Southern... Read more →

Below is an absolutely thrilling video, in which Ike sings "Happy Birthday." Only without any of the actual words...or the right melody...and also there's no cake. But there is a candle and an excess of toddler confidence and ham-face, so... Happy Friday! And no, I'm not paying royalties on that, suckers. It's a new original arrangement. Read more →