Yesterday was the 16th Valentine's Day Jason and I have spent together. Sixteenth.

Shortly before our first Valentine's Day together, on our very first date, this happened: 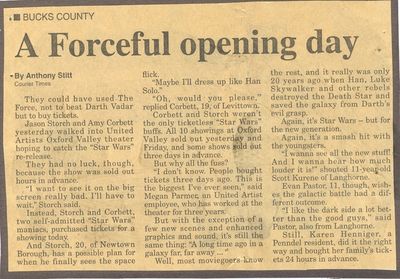 You can read the full story behind this newspaper clipping here. Highly recommended reading, especially if you've never dug that far back (2005!) into my blog archives. I would love to say oh, isn't it funny how much I relied on CAPS LOCK and run-on sentences for humor back then, but that would probably spark some kind of existential "LOOK AT YOUR LIFE. LOOK AT YOUR CHOICES."-type crisis that I've been yammering on for over nine years and have still not managed to grow as a writer in the slightest, and it's only 11 am and thus too early to start drinking and hurling glasses at walls because I CAN'T QUIT YOU CAPS-LOOOOOOOOCCCCCKKKK.

Short version, though, for anybody who ain't got time for that: On our first date (that I did not realize was a date), Jason suggested we try to see the newly re-released version of the original Star Wars, even though he knew full well it would be sold out. (Thus "forcing" us to buy tickets for the following weekend, thus ensuring a second date, because that boy was smart.) On our way out of the theater we were randomly interviewed by a reporter about the sold-out showings and Star Wars mania in general. We cracked stupid jokes that sounded even stupider when printed in the paper, but the reporter asked if we were dating and I said "no" and Jason said "bwah?" and I said "ohhhhh." Then we made out in his car and lived happily ever after.

Anyway. We used to keep that newspaper clipping in a frame, but it was starting to yellow and fade so badly that I put it away at some point. I'd completely forgotten about this little bit of ephemera until yesterday. Jason had it reprinted on a Valentine's card for me: 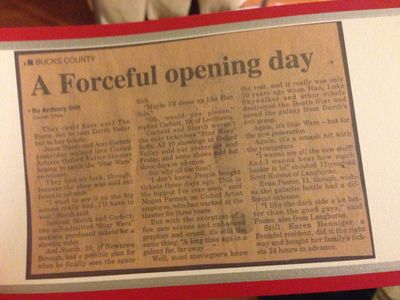 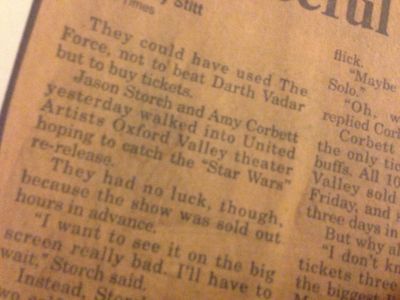 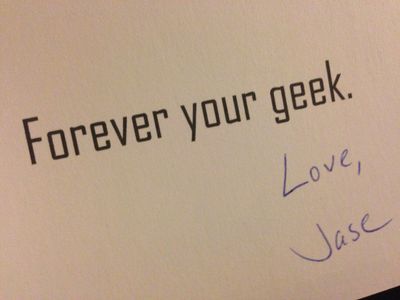 Sixteen Valentine's Days and counting, and that boy still knows how to do them up right.

(This card accompanied a small assortment of vintage L.E. Smith black amethyst vases, because OBVIOUSLY. I immediately freaked out and spent 40 minutes arranging flowers in them [BECAUSE AB CHAO] and then spent another 40 minutes on Google trying to figure out what decade they were from [1930s, possibly even late 1920s; good eye, husband!]. So all-in-all a pretty romantic evening by nobody's standards except mine.)

(I made Jason a card and bought him a book that includes a map of all the whorehouses in Phuket, Thailand

, because I am also awesome and way romantic.)

It is so cool that you have your first date, um "date" immortalized in newsprint.

I got two origami lilies yesterday morning. But then I got wine and chocolate and Skyfall on DVD last night, so I'm pretty happy too.

Even if not for his nice body and the recent beard hotness, I can totally see what you saw in him.

I just got totally sucked into 2004 archivey posts and OMG! Snarkywood! The gah gah gah borders!

And then I realized: I've been lurking a looooooong time and have maybe commented twice? Since before Noah was born? That's sad. So now I'm commenting. Yay, comments!

*This comment brought to you by "it's after 5 on a Friday and I am giddy with the freedom. And maybe some pre-dinner wine.

Aw, that's such a cute story. And a pretty awesome Valentine's Day card. You should frame the card. That would be so meta.

I'm convinced that there are a lot of great first date stories out there that just need to be told! You just proved me right.

He totally wins at Valentine's Day. And you win for best non-recognition of a date that was an actual date handily beating out my 6th grade response to a boy who asked me if I wanted to go out of 'Go where?'

Great story! And don't worry, I didn't know the first date with my hubby was a first date, either. He actually asked me during the date "So, can we count this as a first date?"

Glad you two are still geeking out together!

You two are the sweetest couple. May you have many happy years together.

Also? Thanks for sharingthe book you got for Jason, because now it is going to be Christmas gifts for my nephew and bro-in-law. And maybe me, too! #dangerzone

I just want to gasp in horror at the number between commas after your maiden name, because... OMG unrreal age.

We had our first kiss after the re-release of return of the Jedi. I've now spent half of my life either dating/engaged/married to him. The force is something!

So. Geek. Love. What a cool artifact, and: Good On 'Jase.' Happy Day to all of you (also fun to recognize the locals in the article).

I've been reading for years, but somehow never knew this about you guys! I would say, "where have I been?" but I've been here... just oblivious. :) This makes your boys love of Star Wars even more precious.

How cute is this! I love when people celebrate Valentine's Day and do it simply rather than over the top unnecessaryness. We don't do anything special (and by special I mean NOTHING AT ALL) but this year he bought me a few avocado because I'd mentioned wanting some that morning and I found this lotion he likes. In my Isaac Hayes voice: daaaaaaaaaaaaaaamn right.