The meeting went just as well as expected, which is to say awesome, which to say I love everyone and everything right now. Including you! Oh, you. Come give us a cuddle.

Noah will transition to the general education classroom for math after spring break, surrounded by the nicest, most supportive team of bona fide Noah Fangirls that we've ever encountered since starting this journey over five years ago. These people looooove him and think he's amazing. And of course I tend to agree. 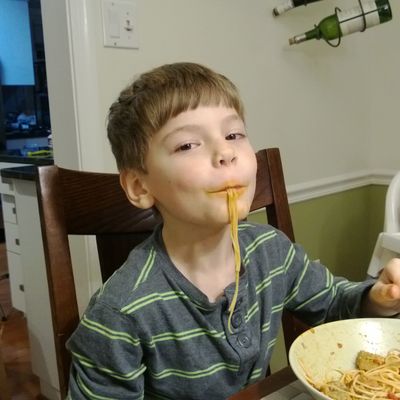 I should note, in case anyone was/is concerned that we're getting rushed or pushed out of services: There is actually no change or reduction at all in the number of service hours on the IEP. As Kari explained in her comment: It's simply a placement change, aka where he will RECEIVE those hours of service and special ed support. Least Restrictive Environment; pull-outs vs. integration; etc. But the support is still there: The school is still being held accountable to make sure Noah's needs are being accommodated and that he makes progress on all his academic and behaviorial goals. He'll continue to receive one-on-one OT and be allowed extra time for tasks and testing and to leave the classroom for walks/breaks for self-regulation and he'll have personal token system and blah blah blah I'll refrain from typing out his entire dang IEP.

This is a really good leap for Noah to take, but there is still a fully operational safety net underneath him in case it doesn't work out. And it's probably still more like "baby steps" than an actual "leap." But still BOO YAH YAY HE IS DOING SO AWESOME. 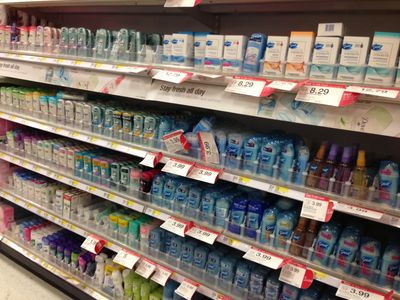 Yay Noah! It's been so amazing to take this journey with you guys. Thank you for including us.

I love his triumphant-and-I-get-spaghetti look. Awesome.

Yeah for Noah. Also, when did he morph into Jason- thinking there will be all kinds of fangirls in his life if he continues down that path.

Also sad, at first I thought those were pregnancy tests....

So happy for you guys! Way to go Noah!

So much awesome in this post. Yay for you guys!

but what's with the deo? are you going stinky (deo free) or is noah getting stinky (like manly smells)?

It blows my mind to see pictures of him now. Wasn't he JUST a toddler, like, yesterday?

So excited for this excitement because it's exciting! Also, I'd love a war of deodorant (like that bitch Degree telling all of Lady Speed Stick's Secrets because her label LIES.)

Ugh, deodorant. Add "remind him to use deodorant" on the daily to-do list! For the next few years, anyway. And, yeah for great news! Sounds like an auspicious beginning.

so excited and happy for Noah. I love hearing that his teachers think he's amazing. It's wonderful when your child is surrounded by educators who see his/her strengths. This made me all sorts of happy and excited. Booyah yay, indeed!

And then my brain farted and my bifocals failed and I wondered WTH? Pregnancy tests???

Yea, Noah! Also, I can't wait for deodorant wars when you have teenage boys! :)

PLEASE REVIEW SANITARY NAPKINS!! THAT WILL BE THE FUNNIEST THING EVER :-)

OMG I am all a quiver with anticipation for the next installment of Deodorant.

And the truly sad thing is, there is absolutely no sarcasm in that statement at all.

Yay for Noah and you as his awesome advocate!

And I'm psyched for more deodorant wars!!! I actually said "YAY" out loud. Since I was diagnosed with breast cancer in Oct, I've been using Tom's of Maine and every time I use it I think "hippie deodorant!" You could perhaps do a spin-off with tampons...the OB being the hippies. :-)

2. Yay, more Deodorant Wars! (I too thought you meant Noah would soon start wearing it. :))

3. Please consider writing a Maxi Pad Wars. It would be AWESOME. :D

So excited for you and Noah. Back in my school PT/special ed days, it was so nice to be able to say I don't think your kid needs my services anymore, and to have parents agree. I loved being dropped from an IEP

And who doesn't love sassy deodorant to celebrate.

And maxi pad/fem hygiene product wars would be awesome, I concur

I always get a little bit excited when you mention ME in your post! I look around frantically like, "who can I tell about this that will understand how awesome this is????" Then my husband rolls his eyes at me...

WOOOOOO HOOOOOO! You go, Noah, with your sweet sketti face!

Why does deodorant look like pregnancy. That was my first thought too. Woohoo Deodorant Wars!

In other news, yaaaaaaaaay Noah!!!!

Great job Noah! It's amazing to see how far you've come- and I'm sure the leaps and bounds are just beginning.
I'm a speech pathology student Amalah, and I was wondering: what did Noah's speech pathologist do on his first interview/assessment? What kind of questions did he ask you in your first meeting? What and how did he/she assess Noah initially? What specific tasks was he asked to perform?
Sorry, that's a lot of questions haha. You don't have to answer them all, or any of them if you don't want.
P.S. There are loads of people asking (dare I say it...hoping) if you're going to have another baby! *gets clipboard and huge glasses* How do you feel about that?

I went from being a little teary-eyed for Noah to jumpy claps for Deodorant Wars! No, I'm not the weird kid at work...why do you ask?

Yeah Noah! Do you feel like the internet is willing you to get pregnant? Strange peer presure my friend- must keep breeding- spawn additional blog fodder....

Totally thought you were showing us pregnancy tests in that last shot before I realized what it really was.

Yay! I am happy for your family. Also, I wanted to mention something that might help. I don't know, you might already be doing it. My son has dyspraxia and has a really hard time paying attention and with distractions. We started him on an omega and dha supplement and we have noticed a huge difference in his ability to pay attention. I buy it at Whole Foods.