MEANWHILE, ON THE OTHER SIDE OF THE SINK: 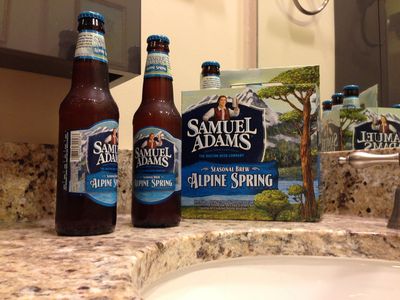 "Listen, Samuel Adams Alpine Spring, we need to talk. Are the rumors true? 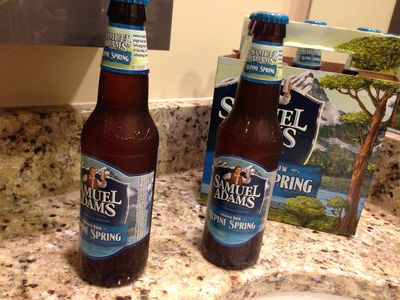 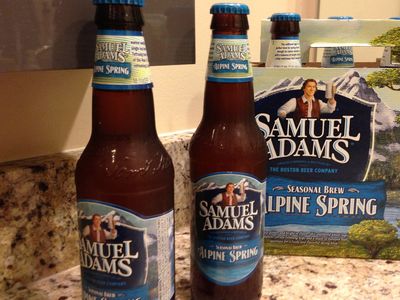 MEANWHILE, IN BETWEEN THE TWO SINKS: 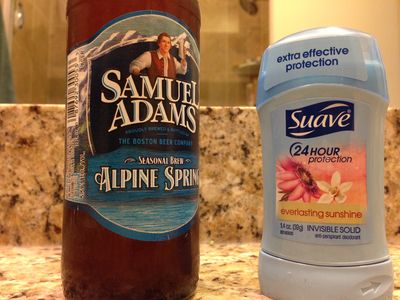 "We can't keep meeting like this, Alpine! It's too risky. If my brothers ever found out..."

"But I need you, Suave Invisible Solid! I need you and your extra-effective 24-hour protection! You are my everlasting sunshine! Nothing can keep us apart!" 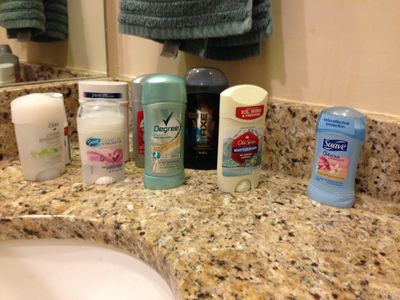 "We know what's going on. We know and it stops now. You've changed, Suave. You used to be so simple and gimmick free and powder fresh and now you and your boyfriend and non-properly hyphenated and redundant promises ARE TEARING THE ENTIRE COMMUNITY APART." 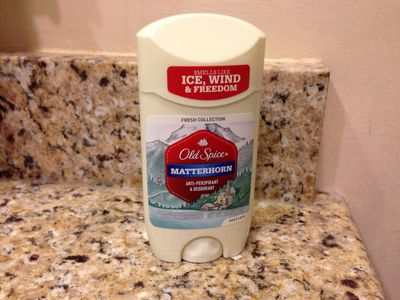 "Listen, Suave. I am the BOSS OF YOU. I just took the word "Matterhorn" and decided it was a SCENT. Cuz BAM. I smell like ICE, WIND & FREEDOM. The mountain-forest-water tableau on my label looks suspiciously similar to that six-pack's over there and I will NOT STAND FOR IT." 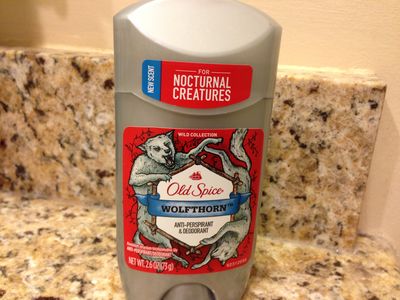 "NOTHING ABOUT ME MAKES A GODDAMN LICK OF SENSE. WTF IS A WOLFTHORN AND WHY DOES MY LABEL LOOK LIKE AN ED HARDY T-SHIRT? I AM CONFUSED AND ANGRY AND APPARENTLY NOT SLEEPING VERY WELL." 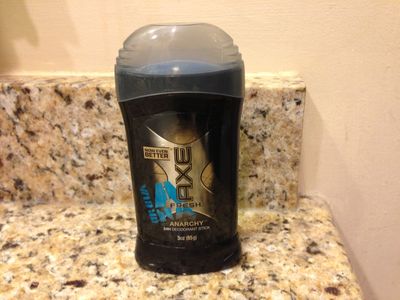 "Oh yeah? I smell like ANARCHY. Bow down, all you nonsensical bitches. Check my ingredients; I bet I'm like 14% bath salts or something." 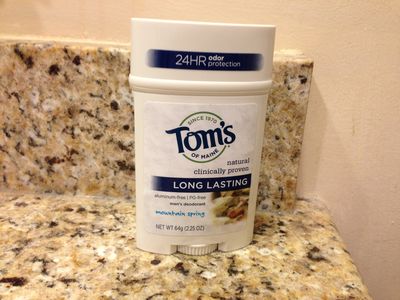 "Usually I'm the laid-back peacemaker around here but those Alpine Spring dickbags are straight up copping my roll. I'm Tom's of Motherfucking Maine Motherfucking Mountain Spring so you best step off. Sheeeee-it." 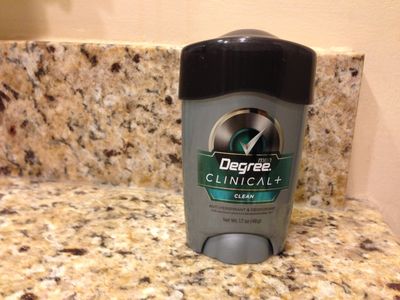 "I...uh...well, I didn't draw the little across line on the A in my name! That's pretty badass, right? There's an extraneous plus sign in my name?  Right? God, I have no idea what I'm even doing here, honestly. Can't we just go bowling or something?" 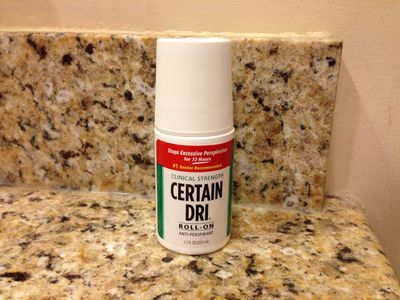 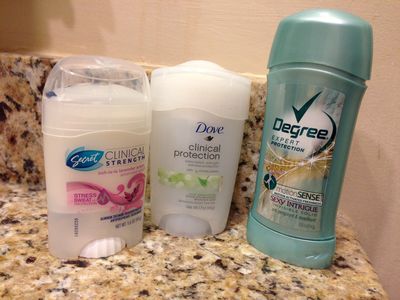 "Holy shit, y'all. I think the men's deodorant industrial complex has lost its damn mind. We're not even remotely funny anymore, even though that one over there claims to smell like ooh la la lavender."

"STFU, Degree Expert Protection Motion Sense Motion Activated Freshness Sexy Intrigue Invisible Solid. You are nothing more than a goddamn tube of word salad now and everyone knows it. EVERYONE."

MEANWHILE, BACK IN BETWEEN THE TWO SINKS: 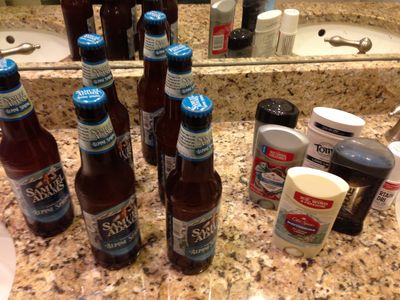 IT'S AN ICY FRESH SCENT DANCE-OFF, Y'ALL. "No, Matterhorn! I looooove him! He wants to marry me! We're going to be together! We're going to have babies that smell like pine needles and have labels like sunshine!" 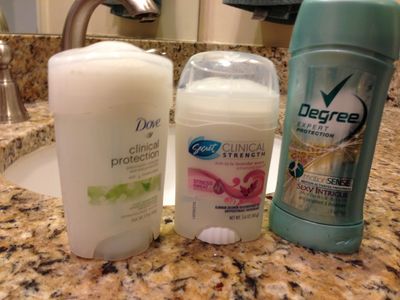 "So no one is gonna ask why there'a a six-pack of beer in the bathroom in the first place? How much pre-gaming does the bitch who lives here do, on average? Damn. I bet she's drunk right now." 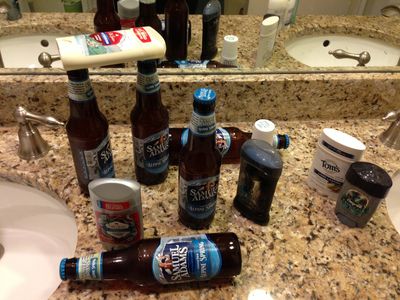 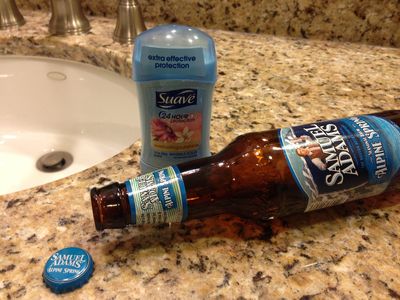 "NOOOOOOOOOO YOU KILLED HIM! ALPINE SPRING, COME BACK TO MEEEEEE!" 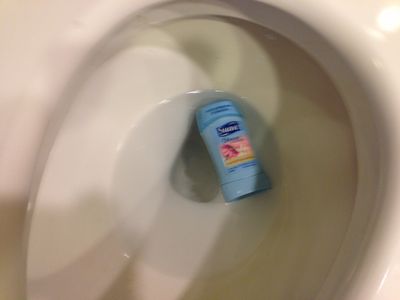 *hurls self to death*

Turns out "Ice, Wind & Freedom" smells mostly like "Generic Men's Deodorant v.122.2329.2," while "Wolfthorn" smells like "Orange Creamsicle Lip Smackers." On the other hand, "Anarchy" smells like "The Worst, Seriously, I Almost Literally Vomited Just Now Because It's That Overpoweringly Bad, Oh My God."

Degree Clinical+ Clean smells like my husband, because that's the only one of these he uses or probably will ever use. So, great. Anybody want a free tube Orange Creamsicle Lip Smackers-scented deodorant? It's fucking hella manly. Gots wolves on it, and shit.

Samuel Adams Alpine Spring tastes like a lager with some lemon juice added. Is just okay, but not bad, and will get you nicely tipsy especially if you day-drink it in the name of science blogging.

I just had to make up a lie about why I am laughing and crying at my desk...have a beer for me. That was too darn funny~

Suave ho. Perfect. And damn Sam is really dead. He ain't even roll onto the floor.

What? Matterhorn? Wolf-whatever?! And what the hell kind of "anarchist" wears Axe deodorant?!
And wth Sam Adams!
I've been away from America too long. I feel frightened and confused.
Thank you for this insight into armpit culture!

You just made my hellish day so much better. Thank you. Reading this at work was SO HARD because I had to stifle all my insane giggling. I think this was my favorite so far.

I just want the story of what it's like to go through the checkout like with 15 different deodorants and a 6-pack...

Tube of word salad...you are a true wordsmith!
Simply. Awesome. Can we have another installment? Pretty please?!

omg, I work in mental health, and the tube of word salad killed me. i use the term word salad frequently in this field, and it will never have the same meaning again.

PLEASE tell me I'm not the only one who read "We're going to have babies that smell like pine needles and have LABIAS like sunshine!"

@Kim I bought the beer separately (since I live in a state that still won't let you buy alcohol at a store that sells ANYTHING else), but I can tell you that I purposely tried to avoid cashier-related judgement and used a self-checkout aisle at the drugstore.

Didn't work. The woman next to me and the employee assigned to help anyone who ran into trouble with the self-checkout gave me the weirdest looks and most obvious side-eye when they realized how many deodorants I was scanning.

THE THINGS I ENDURE FOR THE ENTERTAINMENT OF THE INTERNET.

I needed this after the hellish week I've endured.

Frankly, I'm a little scared by the deodorant options out there, especially for men. My boring Dove Powder Fresh just can't compete.

Hoooo boy, I didn't realize you bought them all NEW for each battle! That is commitement in the name of blogging science right there.

You'd think the Certain-Dri would be the one to run away screaming, not understanding the magic it just saw!

The best one yet!

You are my favorite person in the whole world. That post turned a stupid day on its head. :D

You are my favorite person in the whole world. That post turned a stupid day on its head. :D

Funniest. Post. Evar. I was stifling hysterical laughter at the "I'm Tom's of Motherfucking Maine Motherfucking Mountain Spring so you best step off. Sheeeee-it." GAH the genius it takes to come up with shit like this!

I was laughing so hard my kids actually dragged themselves away from TV to come see what was going on. This series of posts is typical al of what makes your
blog so wonderful! Thanks!

Did you buy all the deoderant at the same place you bought all the fungal stuff for Ike? Because if they're keeping track of that, you're on the weirdest watch list ever.

I wish I could explain to someone how funny this is! MUST SHARE! You are hilarious, don't stop doing this please...

***indecipherable grunting*** - my favorite line. And there were a LOT of great lines. Thanks for this! I love these posts. Madly. :)

Certain Dry, I haven't seen that in years. Basically (it seems to) burn your armpits to the point that they can no longer sweat. In fairness, it works. But it also burns like hell.

If I one day find that I have armpit cancer (that's a thing, right?), I will blame Certain Dry.

Just in case your bathroom storage is filling up with unused deodorants, I'm sure the food shelf or a shelter will take the extras.

BRILLIANT! Also, someone should point out that we, the readers, (or at least this one) appreciate the fact that you probably had to stick your hand in the terlit (that's how you say "toilet" in the south) to get Suave out after she hurled herself to death. Nicely done.

Amy, you are too funny! I do love the DW posts. Your Wolfthorn comments made me make unladylike snort-giggles.
And StatMom, nice West Side Story reference! That's exactly what I was thinking as I read!

OMG, froofily-named beer has entered the picture. Excellent. I wait with bated breath for the other families of carefully-focus-grouped labels to make their appearance. I'm a-looking at you, cracker aisle...

I'm also baffled flavorwise by Sam Adams' new "craft beer" line - I think they're all versions of lightish-beer-plus-artificial-citrus. The Latitude 48 IPA is beer plus grapefruit flavor, for example.

I bow down to your commitment to the craft. Willingness to put your hand in the toilet to fish out that last deodorant is no small thing.

I cannot get enough of this. I'm just saying.

Lawdy, I love your blog!

Oh this one is hilarious!

I always tend to think lemon in beer makes it taste like Pledge.

I think the upside down A on the Degree deodorant resembles Ezra's underwear. Coincidence? I think not....

The thing about Axe Anarchy making you throw up made me crylaff. My husband's a middle school teacher. The first time I ever walked into the school where he teaches, I was all "What is that SMELL?" and he's like "That's the Axe Effect. All the 8th grade boys wear it." UGH.

Quietly laughing my ass off in the office. Thanks for the ab workout as I tried to stifle myself!

I always thought that I'd like a job naming nail polish colors, but I now think "deodorant namer" could be a close second. Hilarious.

Okay, I'm confused. Which deodorant actually won the competition? And as for Axe, I agree with you. It should be called Pee YOU!

You are a red hot mess. For real.

I love it! I always knew that Suave was secretly an easy girl. Also, I was serioiusly entranced last time I was in the deodorant aisle because aren't most dudes just looking for something that makes the sweat rings not so gross?

I'm surprised the people at the checkout line wanted to get close to you...

"Damn! Bitch must have some SERIOUS odor problem..."

All I can say is your beer-to-deodorant-product-ratio is far too low.

Yes to the West Side Story - I totally started humming "When you're a Jet..." when I saw the beer-deodorant face off.

I did just drink some Alpine Spring last night - supposedly it's brewed with pine needles but yah, I just tasted the lemonyness.

Wow amazing story that link between the items. I love them and really true. Those thing are kinda scary me if they could talk like that but funny.

Ha! <--I know, really clever, but, your post made me laugh. What else is there to say?

Um, I'm not sure what's wrong with me, but I don't usually laugh at the Deodorant Wars saga (totally me, not you, of course). But this? I just cried into my coffee. Keep 'em coming! I've seen the light.

Only you can make deodorant funny! Loved it!