NO IT IS NOT 4 PM YET STOP ASKING

Ezra and Ike didn't have school today, thanks to parent/teacher conferences. Ezra's went fine, and his teacher literally used his name as an adjective to describe some random classroom behavior. "That's just so...Ezra, you know?"  Yeah. I know. Claaaassic Ezra, man.

(I did not attend a conference for Ike, because he's only barely attended nine full days of school so far. Christ, I still come home after dropping him off and have a momentary panic at the sight of his empty car seat because OH GOD WHERE DID I LEAVE THE BABY.) 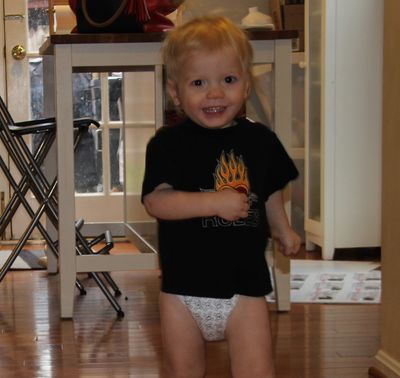 (I DUNNO. MAYBE THE SAME PLACE I LEFT MY PANTS?)

Anyway, I reminded Jason about the day off this morning (super helpfully, from my beddy nest under the covers and at least four pillows), since he tends to forget and then needlessly hassle poor Ez out of his beddy nest of EVERY STUFFED ANIMAL EVER. Ezra's like me: We enjoy a good sleeping in, almost excessively so. Jason starts losing his mind on Satudays if I sleep until 9 — why, it's so laaaate, how are you still tirrrrred — even though I could easily stay unconscious until 11. Let the boy sleep!

This morning, though, Ezra was already up and awake before the sun was up. Jason found him in his darkened room, bleary eyed, trying to get his karate uniform on.

His first-ever belt test is today at 4 pm. I'd say wish him luck but I don't think he even needs it. He's been ready for this for quite some time now. Since 5 am, at least. 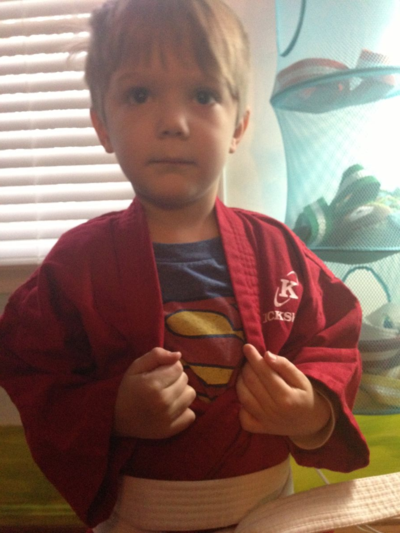 (Yeah, he probably will wear the Superman shirt to the belt test. I guess I could make a big deal over needing to wear only the school-approved uniform but I'm taking a four-year-old to kick a balsa wood board in half and scream HIGH YAH at it. I think we can handle just a touch more ridiculousness, honestly.)

Oh, that is the cutest thing ever.

It's only so cute because it did not wake me up at 5 am, however. Here's to more sleep for you.

And still he has two hours to go? MOMMY MAKE IT BE FOOOOOOOOOUUUUUUUUUUUURRRRRR-UH.

I hereby declare I do NOT think it possible to handle more cute than is contained in this post. You plop Noah in there somewhere and bam! I done combusted.

I agree with you and Ezra - sleeping in is the best! I sleep in at every available opportunity. It's awesome!

First of all, the pic of Ike, O.M.G., he's huge and so...toddler like! What happened to your babyyyyy.

And how cute that Ezra was up and ready for the test that early. Does he have some of your anxiousness or is he just extra prepared?

Such a cool little man!

Gotta say...I thought Ezra was winging the bird there on his left hand, which is the only way that picture could get better!

As I was reading this on my phone, my almost 4 yr old daughter peeked over my shoulder and said "I want karate clothes like thaaaaat boy". Looks like your site now falls in the same category as commercials, Sunday newspaper ads, and catalogs.

Does Ez go to kindy this year or next? He is a cutie- Ike is full blown BOY now. Have a nice weekend!!

I agree, sleeping in is the best!

I've nominated you for the Beautiful Mama Blog Award. I just love your blog and really do look forward to seeing what's up with you and your kiddos each day. You can get the award at http://lifewiththegirlnextdoor.com/2013/03/08/friday-feature-another-award.

I want BABY IKE back. I am a baby-lover. Younger is better and he just keeps growing. Next he'll be on one of those balance bikes and then ice skating and then I will have to cry for the passage of time.

I suspect that you are secretly using the same baby photos and pretending that you have 3 little boys when, in actuality, it's only 1. It's like their DNA is IDENTICAL...

Love the superman shirt. Hope he showed that balsa wood who was boss.

When did you grow Ike into a toddler? Stop that. He's the BABY!
Ez is awesome

LOVING the SuperMan/Boy shirt. Here's wishing it was all he could have dreamed of!

Personally, I think the Superman shirt makes the outfit.