Home Archives About Subscribe Advice Smackdown Tip Jar
I Can Haz Cat? No I Cannot Haz Cat.
Attack of the Zombie Vegetables

And It Only Took Us Seven Years

3) Movies where children or animals die

On Saturday I painted the boys' bathroom. Like, the whole thing. By myself! This gigantic personal accomplishment, however, was slightly underwhelming in the end because I painted a white bathroom a...slightly different shade of white. In person, I swear it makes a HUGE difference. (Especially since I sort-of suspect that the white "paint" the previous owners used was actually just primer, as I don't think anybody sells a shade called "Mental Institution Lightbulb Whitey-White.") But it certainly doesn't make for very exciting before/after pictures. Also, it's a damn bathroom. 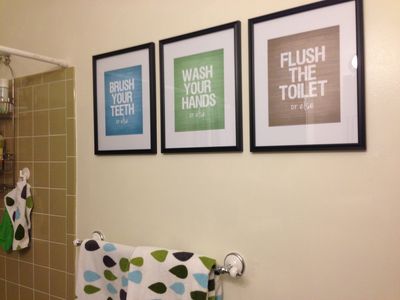 Check out the new towel bar! It's from Homé Depöt! I bought it because it was a towel bar.

(Towels are from Ikea. Prints are from here. I love them, but my children do not read them. At all. EVER.)

Then we painted all the hallways and staircases, and that was even MORE exciting because we painted them the same color. This bold interior decorating decision was made because "wall scuffs that have probably been there since we moved in" is a really passé trend that I am just so over.

THEN we painted the living room. This crazy burst of progress was made possible because we bribed some friends with pizza and beer in exchange for manual labor, which is the best kind of bribe for the best kind of friends.

Noah also helped. For practically free! We didn't even have to give him any beer! Kid has no idea how to bargain. 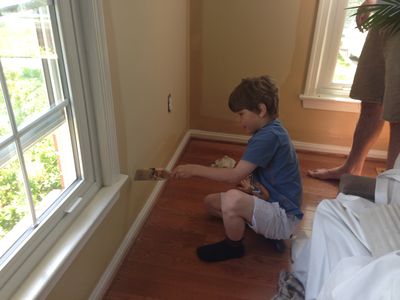 And so the formerly brown living room is now a...slightly different shade of brown. 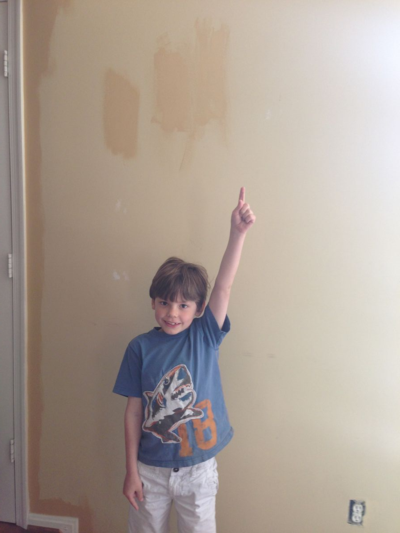 Whatever. I love it and can't stop talking about how much I love it and how much I wish we'd just up and painted it ages ago, like what's our lazy-ass DAMAGE, yo? This wasn't so bad, especially since we pawned most of the annoying parts off on somebody else. Think they'd come back again and paint my office? I will go as high as pizza, beer and Velveeta dip, if I have to. (I promise that the stepladder will be removed from the corner at some point in mid-2014.)

Though FOR THE RECORD, thanks to Noah's offer to also serve as the project's photographer, I do have documentation that I did actually paint and participate. In the form of like, 300 identical photos of my ass, in various stages of blurriness.

So glam, so unshowered, and so beautifully coordinated with that stupid ankle brace. I am a goddamned walking (limping) lifestyle inspiration.

What do you have against injustice?!

We have the same prints in Michael's bathroom, from the same etsy shop. Framed the same way even. (Hmm, maybe I AM just a bad rip off of you.) Anyway, Michael totally ignores them too.

For a second I mistook your ankle brace for stirrup pants.

At least it isn't stirrup pants!

I'm so glad you mentioned the ankle brace. It was going to be so sad that I was going to have to stop reading you thanks to the stirrup pants.

Yup, count me in as one who also thought you were wearing stirrup pants- I was so going to judge you for it too. ;)

And yeah, I'm with you on the more...relaxed view of homeownership. We swore up and down that we'd paint our living room walls ASAP, because they're so ugly. That was almost six years ago, and they still haven't been painted.

Hey, I bet you could actually get a stirrup pant trend started! They weren't the WORST thing going in the 80s...

I need whatever motivated you to do all this painting to come smack me aside the head. I currently have an office that is mostly painted brown (the color I picked) from deeper baby blue (the previous owners pick). Except I still haven't gotten around to doing those last 2 inches on the top and bottom of the walls from when I started...in November. Painting sucks.

I just had to comment that I thought you were rockin' stirrup pants... but I see everyone else already did.

Looks like Ceiba (did I spell that right?) was helping too! Where is Max? Damn cats never help around the house...

I too thought they were stirrup pants. Paint looks great. I'm itching to paint my family room as I only got the wood paneling primed thus far

Do you think they'd read this print?

In a weekend you did all this? You are my hero!

Do you think your friends could be talked into painting my house next weekend? It desperately needs a fresh coat of paint. The new paint looks great!

Why I love renting. I look at my handprinted walls and think, "I am so sad, I cannot paint this! I only rent this apartment." And the pour another glass of wine, smirking.

It looks good. Even for brown!

You shouldn't have said anything. I didn't even notice the ladder.

ummm I just ordered your prints....AMAZING

Yep, I thought you were wearing stirrup pants as well. And I love love love the prints. But I'd have to paint my bathroom before I'd order them.

I am so glad everyone else mentioned the stirrup pants confusion. This makes me mainstream, not judge-y.

I agree with everything on the extreme dislike list except corked wine. Whoa. That is, like, unnecessarily refusing way too many delicious wines out there because of a cork. W-I-N-E. I love it with or without a cork, in a box, with a fox, whatever.

I had to check the prints because I thought they ended with ''or else''. Not that it would work better...

My living room is mental institution white too. It's a long story. I hate it and can't wait to repaint.

I copied you and bought two of the prints. They are great. And I love that you can pick the color you wat. Thanks for the inspiration.