Another Super-Exciting Post About What We Ate This Week, Oh My GOD

(So it's come to this. Oh, blogging. The world had such high hopes for you!)

Despite the now-documented existence of ZOMBIE BETCHTABULS, Ezra continues to blow my tiny little mind with his love of salad. And Noah continues to glare tiredly at me, meal after meal, because he is NOT RELATED TO THAT FREAK OVER THERE. THE ONE EATING RAW LETTUCE LEAVES.

So meal planning continues to be a delicate dance o' Food Tetris — Child A will eat this but not that, Child B will eat that but not this. Child C is a wildcard, accepting and rejecting foods randomly and capriously like a total freaking jerk.

Meanwhile, Jason and I would also, you know, like to eat things that we like. And to eat things that are healthy-to-healthy-ish, but are satisfying enough to curb the 10 pm cravings for ALL THE CARBS IN THE HOUSE. And can it not take a million hours to make? Also, please include some free diamonds and a unicorn, while we're making requests.

We have had some successes, though. Noah discovered that he likes carrots. Cooked carrots, anyway, and carrots that have been glazed in butter and maple syrup. Which...okay, maybe not the biggest nutrition win in the world but I will take it. He calls them "fruit carrots," and I will take that as well. Especially since he gamely tried and roundly hated all of the following:

But! Buuuuut! He also ate these turkey burgers and these bison burgers, despite them being completely chock full of things that could be picked out. And despite them being BURGERS, which he refused to have anything to with for about 80% of his life. (He would eat the bun, maybe, and only if he could pick off any microscopic flecks of any evidence that it came in contact with the burger patty.) After a dubious breakthrough involving a McDonald's cheeseburger last year, I of course tried to get him to eat burgers at home, but was informed that my homemade burgers were not McDonaldsy enough, either in taste or appearance.

What changed? I bought a package of slider buns.

And my kids were TOTAL SUCKERS for those slider buns. They were so excited about the stupid tiny buns that they didn't even notice or care that we'd put beans in the burgers. Beans! TEXTURE MADNESS YOU GUYS.

(The recipe calls for kidney beans, which we did not have. I used cannelini instead and they were delicious. Thanks to basically being raised at a Chipotle, Ezra and Ike actually like plain beans, so I just served the rest of the can as a side for them with some olive oil and seasonings.)

Two nights later they were STILL so excited about the stupid tiny buns that they didn't even notice or care that we'd put DICED JALAPENO in the burgers.

. I shall call it "Stupid Tiny Buns" and it will be exactly three pages long.

Chapter One: Buy Yourself Some Stupid Tiny Buns

Now I want try some veggie burgers on the Stupid Tiny Buns because I can't leave well enough alone. I will up this goddamn burger ante to antes previous un-upped. (Anyone have a good recipe? Preferably one with lots of beans and lentils since I THINK that would have a higher chance of acceptance? Of course now that I've put that in writing...)

For the record, and in the interest of full disclosure, this one would not even TRY the bison burger, despite loving the turkey version. He ate some tomato and two Stupid Tiny Buns. Luckily he is cute and obviously not wasting away to a carb-based nothing. 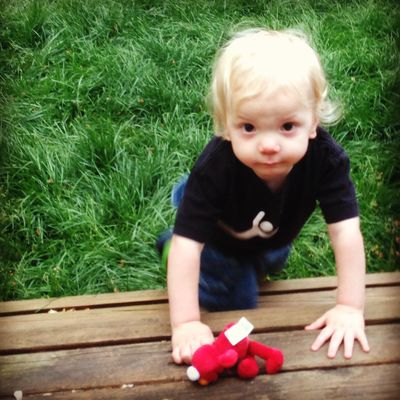 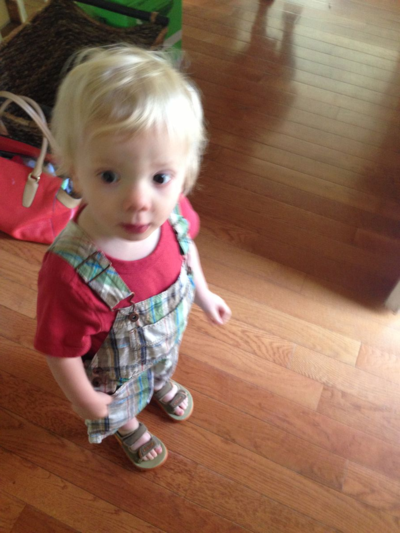 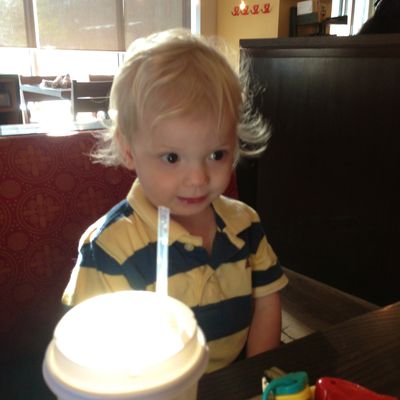 I like these bean burgers a lot! Have not actually convinced the kid to eat them, but will have to try tiny buns: http://angrychicken.typepad.com/angry_chicken/2011/04/homemade-bean-burgers.html

That second photo he's all eyes! So handsome x

So...the blood type diet seems crazy to me, except that my 2yo doesn't eat meat but loves fruit and black beans, so everyone asks me if he's Type A blood (I have no idea) and the baby will eat stuff he won't touch. I'm wondering if it's less of a behavioral issue and more of the fact that we should each be eating what our bodies naturally crave (although if you've never had it, how would you knowwwwwww?).

LOVE the Cards Against Humanity reference in a post on your kids'diet. One awesome point for you, ma'am.

These are totally yummy, though they tend a little more towards the sloppy-joe end of things. Maybe I'm just making them wrong. Kid approved (by my friend's kids, not mine.) http://kblog.lunchboxbunch.com/2012/02/easy-sweet-potato-veggie-burgers-with.html

I found a recipe once for sweet potato burgers that involved Cannellini beans, panko, I think an egg... It was absolutely delicious.

My kids had an experience with lamb sliders at a Middle Eastern restaurant that ISWEARTOGAWD almost put them into food bliss comas. Lamb sliders. One of them won't eat pickles, the other one won't eat almost any food that touches any other food. Like pizza. And sandwiches. But lamb sliders, sure. Why the f**k not?

This cracks me up, but also reminds me to be grateful. My almost 3 year old eats more than I do most days, so I really don't worry about meals. But, here's how it has been going lately. I make whatever I want for dinner. She sits down and either eats an entire plateful before I can serve myself or takes one look and demands something else (cereal, yogurt, chicken, etc). (Note that I must serve her a second plate before eating myself.). If its the latter, she usually eats all of that and then starts asking for food off of our plate, eating copious amounts of the previously rejected food. She's not even 3, and I'm going to need a second mortgage to feed her. What will her teen years be like?

Totally ignoring the topic of your post and subsequent request. How cute is that baby (err...toddler) in those madras overalls and sandals?????

What about chickpea based burgers? Like a patty version of falfel, but healthier because you either grill them or back them in the oven. I am obsessed with them and you can literally just make up the ingredients. My first foray was with a Jillian Michale's recipe, but have since tweaked and forgot and made it different every time and THEY ARE STILL DELICIOUS. EVERY. TIME. Don't even mention the tzatziki sauce.

Okay, I'll give him the kiwi (it is a bit weird) and the strawberries (seriously, the seed texture was one I had to overcome and I'm not that picky) but grapes?! Sadness. Have you tried throwing them in the freezer and allowing them to eat as a frozen snack? YUM

First time commenting despite being a 6 year lurker! :)

These have been my favorite veggie burgers so far. My 2 1/2 y/o daughter loves them as well so that's a SCORE!!!

I love these southwesterny black bean and rice burgers. Three of my four kids eat them and that's pretty good.

These are my favorite!
http://www.skinnytaste.com/2012/06/spicy-black-bean-burgers-with-chipotle.html

in Noah's defense, cantaloupe tastes like garbage that has been left out in the sun.

he's on his own with the grape hate, though, that is just weird.

I'll second Christine's sweet potato burger recipe... we make it all the time and it's mighty tasty and very easy!

That baby is So. Cute.

Ah, fooooood. I will come over and eat everything that the boys do not eat. Also, I think those are the cutest pictures of Ike, ever!

Ha! I love that the buns were the thing that pushed them over the edge. And I agree, who could not love cantaloupe?

My daughters love the veggie patties from Costco. They just eat them heated up and plain. I tried making some from scratch and they were reeeejected. So I will continue to buy the Costco ones.

I'm totally on Noah's side with cantaloupe. Actually, with melons. I don't understand how people eat them.

Want to blow their texture minds?

We make these all the time and adore them. I like to add a (very well-drained) can of Trader Joe's green chilies and basically a whole package of fresh cilantro, because both my partner and I are Crazy Cilantro People. I doubt that part would go over well with your offspring, but what the hell. YOLO/In Slider Buns We Trust/Etc. http://guiltykitchen.com/2010/01/10/black-bean-burgers/

I love these kind of posts...they make all of the rest of us feel like we're all in it together, fighting the good fight! And by the way, thanks for illiciting new recipes from your readers for me and my newly declared vegetarian 5 year old. Great.

I love the ultimate veggie burger recipe from Cook's Illustrated http://www.cooksillustrated.com/recipes/detail.asp?docid=6651
If you don't subscribe I am happy to email it to you. Lots of good stuff. I usually make a double batch and dirty all the dishes. They freeze really well, so package them up in pairs and then always have them on hand. Good luck!

Cook the rice in boiling salted water with the onion for 12 minutes or according to the pack instuctions (I use a baby stock cube if giving it to my son)
Meanwhile mash the beans with the garlic, harissa, chutney, tomato paste & seasoning
When rice has cooked and cooled add it to the other ingredients, mixed very thoroughly and form into four patties (or more to fit tiny rolls)
Sprinkle the polenta on to a plate and coat each side of the burger
Preheat the grill to medium, brush burgers with olive oil and cook for 2-3 minutes each side until golden and hot right through
Serve immediately

My friend makes these and they are SOOOO good and also perfect for the "stupid tiny buns". My super-carnivore-will not eat a meal without meat- husband loved them.

I feel your pain, thankfully I only have 2 but they are the complete and total opposites in every way when it comes to food.

OMG, and I never use that, the 2nd or middle picture is the sweetest. Plaid shortalls and sandals in one? You're killing me.

Thank you for making these food posts! I have 9 month old twin girls and we are introducing new foods. I have major food issues, and the book you suggested has really helped me deal a lot better at mealtimes so I'm not so overwhelmed.

I have found, FWIW, that my kids are charmed by any "mini" versions of food. Which makes sense in that they are small boys (5 & 8). That includes cornish game hens, the little teeny tomatoes you can get at Farmers Markets (but not normal tomatoes) etc. I blame the baby carrot industry for this trend, but I buy the slider buns whenever they have them at TJs for the same reason you listed above.

My 15 yr old found a recipe on Pinterest, we kinda tweeked it a little bit. Chop cauliflower into small florets, oven roast with a spritz of olive oil. When brown on the edges, toss in Buffalo wing sauce (Franks Red Hot) and dip in bleu cheese. Child is insane for this. If I can keep the bleu cheese to a decent amount, it's healthy. Maybe this will work for you? For someone?

Well I had to go and look up 'slider buns'...not a commonly used term back here in the UK! And, as my children love to make bread based thingys, I found this sweet little recipe: http://www.themanlyhousekeeper.com/2011/05/26/bread-baker-the-best-slider-buns/