Home Archives About Subscribe Advice Smackdown Tip Jar
Another Super-Exciting Post About What We Ate This Week, Oh My GOD
Seven Years in Exile

We spent the weekend in Colonial Williamsburg. Full Post With All The Photos will be coming later, under the Sponsored banner, but I promise it will still manage to reach out through the screen and squeeze on your heart until water falls out of your face. I mean, not to oversell it or anything, but Noah was in rare form the whole time; basically a walking, talking blog entry of childhood wonder and awesomeness. He made two different grandmothers CRY on two different occasions, you guys. And I'm not exaggerating in the slightest. Two complete strangers cried actual happy tears in front of me because they just couldn't even with him.

I couldn't even either. I still can't even.

We were eating breakfast at the hotel on Saturday morning and my children were devouring a truly frightening amount of food from the buffet, but I guess they were being charming about it, as several older couples stopped to compliment their behavior to me on their way out.

(Which some day, when I am not so completely focused on getting out of restaurants alive, I promise to pay forward and do that for another families dining out with young children, because it really is nice to hear that someone appreciates your efforts to keep everyone's inner helldemon from unleashing itself all over the appetizers.)

That's when one of the ladies noticed the doorknob.

"I'm guessing there's a story behind that?" she asked.

There was. Of course there was. 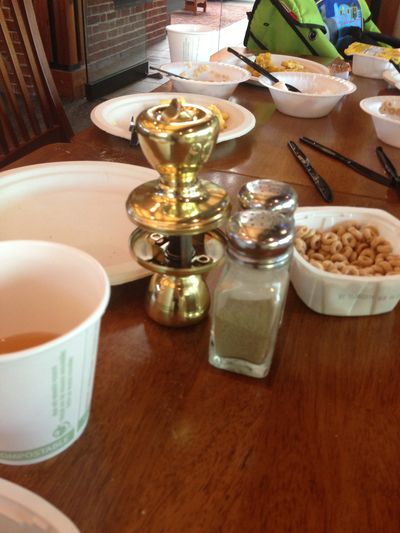 We recently swapped out the brass doorknob on our bedroom door for a silver one, to match the rest of the hardware in the room. Noah found the old doorknob and...well, got a little attached to it. In the grand naming tradition of Mister Woodchip, our family now had a Mister Doorknob.

Later, I found Noah walking around the house with the doorknob. "This is my room! And that's my bunk bed. I sleep on the top. Would you like to look out the window?"

I asked him what he was doing; he explained that Mister Doorknob had spent his whole life stuck on our door and had only ever seen our room. Now Mister Doorknob was getting a tour of the rest of the house.

So naturally, it was only fair that Mister Doorknob get to come on vacation as well. He's never seen Williamsburg either, Mom.

By the time I got to this point in the story, I realized my voice was catching. Mister Doorknob had seemed just kind of funny before, and even borderline annoying. (Mister Doorknob falls apart into two separate pieces, one of which is always getting lost and ALSO MY CHILD IS WALKING AROUND WITH AN ANTHROPOMORPHIZED DOORKNOB.) But at that moment, I was suddenly whalloped with the innocent preciousness of the whole thing, of my sweet little boy wanting to show a doorknob a nice time, because he liked it. And because it never would occur to him that it was weird or embarrassing to like it.

The woman listening to my story was hit with the same little pinprick of emotions, as she brought her hand to her mouth and gasped. "That is...so sweet," she said, as we both awkwardly wiped our eyes. "Thank you for sharing that. What a wonderful child you have."

Mister Doorknob spent most of our visit tucked safely away in Noah's backpack. But Noah made sure to pull him out every once in awhile to show him anything important. 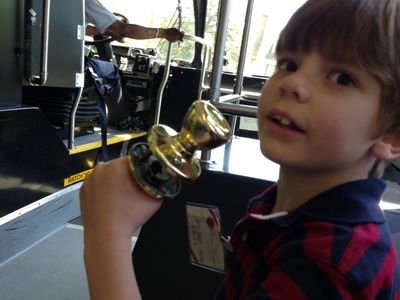 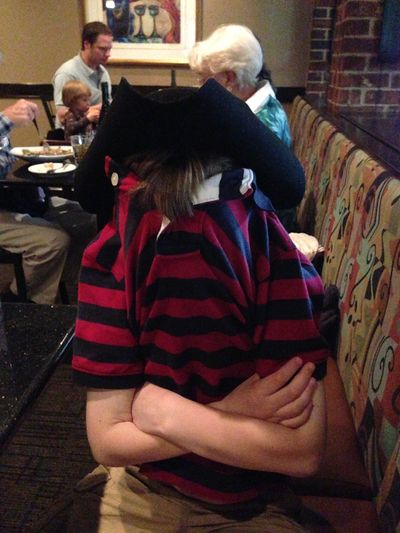 Tears. And laughter. Thank you.

OMG--my sister was in Williamsburg this weekend; have to go email her to see if she saw you! Tears and laughter from me too!

My oldest (8 1/2) reminds me quite a bit of Noah. It had never dawned on me one day he might be more "aware", try to reign in the general quirkiness that makes him awesome. Turns out this starts happening around the end of 2nd grade, and it makes me cry that I did not always appreciate the silliness, but was more focused on the "is this typical". He has not changed, just growing up, and it sucks. Not meaning to be a downer, its just that yeah, I get it. Enjoy Mr. Doorknob....(I will be remembering our outings with Mr. mustard jar)

That is just the sweetest thing!

I hate to say when I first read the blog title it read in my head as the adventures of Mr. Dorknob and I thought oh no what did Jason do!? Thankfully it was really about how awesome Noah is!!

Do you still have Mr. Doorknob's long screws? That might keep him from falling apart.

Has the Misters Doorknob and Woodchip met yet?

Jeez Louise...are we all hormonal? I'm a mess thinking about a doorknob out in the world like Flat Stanley!

What a great story. It shows how truly unique he is & I hope he never looses this compassion for others!

He is the sweetest! Gahhhh with the love! <3

Okay, so, in light of the ongoing Deodorant Saga, I think it's safe to say that the apple doesn't fall far from the tree. :)

I hope Mr. Doorknob had a good time! Maybe he can write a blog for you...I got really attached to things like that as a child, too. I think it was a way to explain the world to myself. Plus it helps to have a *friend* who doesn't talk back!

Oh my GOD, this story had me rolling and then feeling that same catch in my throat. Why must they grow up??

Also, thanks for answering the question in my head about if parents like to get compliments on their childrens' good behavior.

Unrelated: I'm watching Throwdown and freaking out! I know I'm behind the times, but y'all were awesome. I really need to try some mussels with blue cheese. Stat.

Related: I really needed a reminder to remember to savor the sweet quirky things kids do, instead of worrying about judgment from strangers. Viva Mr. Doorknob!

It's a pleasure to watch/hear about him growing up.

Kids, they're so sweet, even without the barbecue sauce i like to pour on them before I devour their delicious little ears. Loving them has me making my living as a Baby Whisperer at 55 and spending my Saturday night with a three-year-old helicopter-obsessed cutie who beat the woo out of every single soap bubble before he's get outta the dang tub. I do believe that Johnson's Baby Wash haz been served, homey. I can't think of a better profession altho the pay leaves a bit to be desired.

Oh my...that is the sweetest thing ever. If I was the doorknob I would absolutely want to see Noah's room and bunkbed! Must be lonely only seeing two views every day...door open view...door closed view!

OMG, what an adorable story. I love all your boys and I know that sounds stalker-ish since I've never laid eyes on your family. (I swear!) We LOVE Williamsburg. I went to college there and now live 1 hour west, in Richmond. My family lives 1 hour east, in Virginia Beach. So we meet in Williamsburg often. In fact, I'm meeting my mom there on Sunday. And I have to say if I had been there last weekend, and glimpsed you and your family, I fear I would have reacted as though I were in the presence of rock stars! That is, I would have acted silly and stupid, all while being unable to form complete words. So probably best for us all that our weekends didn't overlap. Looking forward to your post all about your trip!

Amy, I love your blog. But, I really love the Noah posts. My 5 year old is a bit quirky and we didn't really realize it until this year. I see so much of his quirky in Noah and it helps me realize that it's okay. It's 5:00 am, and I can't really think of examples...but thanks for sharing your awesome kid with all of us.