Things That Happened This Week

1. I officially gave up on the art of carefully crafted and creative blog titles. OBVIOUSLY. Suck it, SEO. We have no use for you around these parts.

2. We had the bathtub in the boys' bathroom repaired and reglazed. It made the entire house smell like a giant magic marker. The guy doing the work didn't even wear a MASK, meanwhile I could feel my brain cells having a giant tripped-out rave before overdosing on whippits. And then a unicorn walked by. But hey! The bathtub looks fantastic.

to his room. He quickly got to work finding the very best ones. 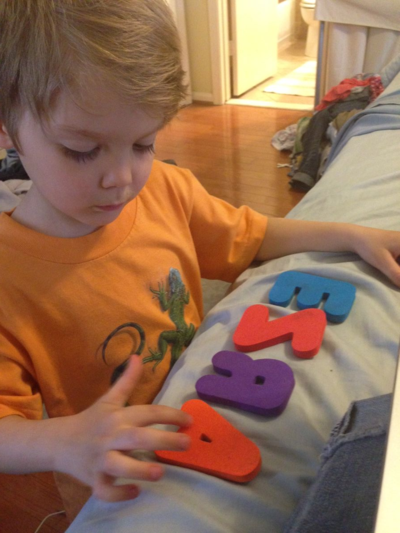 (Please ignore the piles of laundry. I am enfeebled! I cannot carry loads of laundry down the stairs in my current condition. Beause ye.  My ankle injury. Is totally why this completely out-of-the-ordinary level of mess is happening. Yeeeeah. That's the ticket.)

(Oh, and obviously the children were not here during the bathrub reglazing. They were off in the fresh air, doing wholesome activities with the sitter, while I tried to get work done in between bouts of arguing with the giant purple snails on the ceiling. Can you believe they don't like Game of Thrones? Jesus Christ.)

At Ezra's last parent-teacher conference, I mentioned my concerns over his lack of letter recognition and general disinterest in drawing or writing beyond some half-hearted scribbles. I was like, "look, I get that Montessori thinks milestone charts are a facist tool of the development oppressors or something, but COME ON. I PAY MONEY. TEACH MY KID WHAT STUFF HE NEEDS REAL GOOD."

Naturally, I shouldn't have bothered, because Ezra proceeded to explode in the reading/writing/drawing departments almost immediately. I bought him a small Moleskine notebook

like the one his teacher uses, and within a few days he was drawing elaborate stories involving outer space and beaches (in outer space) and minivans (in outer space). Attempts at writing letters and his name soon followed. I think our chalkboard wall and drawing table in the kitchen helped too, once I made a point of plopping his butt there and insisting he spend some time coloring every day. 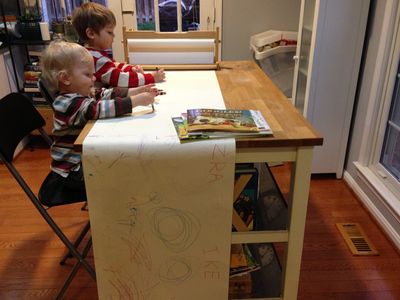 (Please ignore the overflowing recyling bin in the background. We simply love the earth THAT MUCH.)

4. Ike's hair went insane. For reference, I've spent the last month trying to get a decent picture of these two little baby curls on the back of his head: 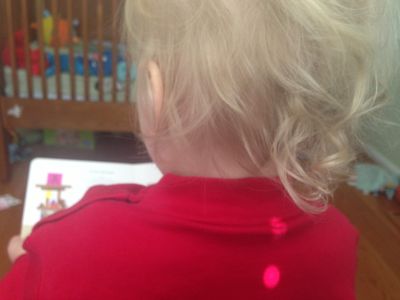 I figured I was going to have to cave soon-ish and cut them off, because the rest of his hair was growing long and straight and mullet-ish. The curls were like a weird extra hair appendage growing straight off the back of his head, and seemed permanently gooped up with jelly and syrup. The humidity spiked this week and his hair lost its damn mind. Almost every hair on his head is now a perfect, gloriously towheaded ringlet. 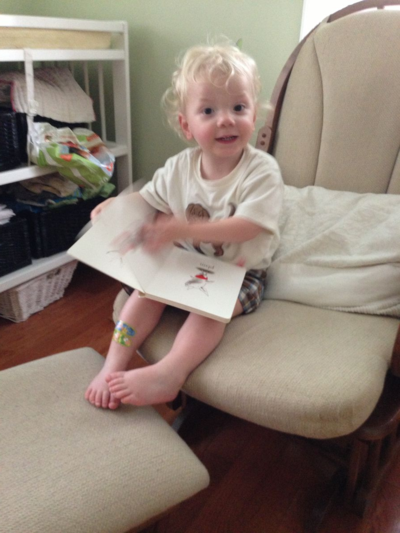 If you think Imma let scissors anywhere near this child's head anytime soon, you be tripping. You be tripping magic-marker-scented unicorn balls, lady. 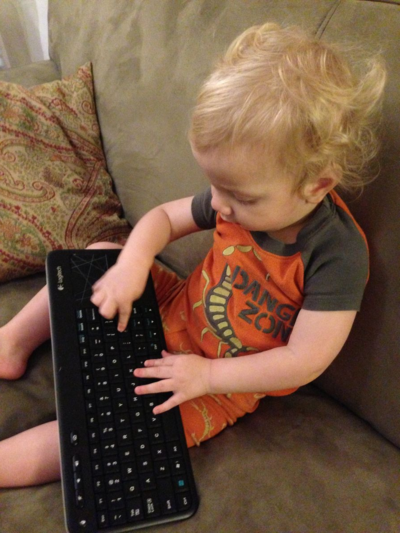 Though I admit it can look a little Wolverine-like at times, like right after a bath. 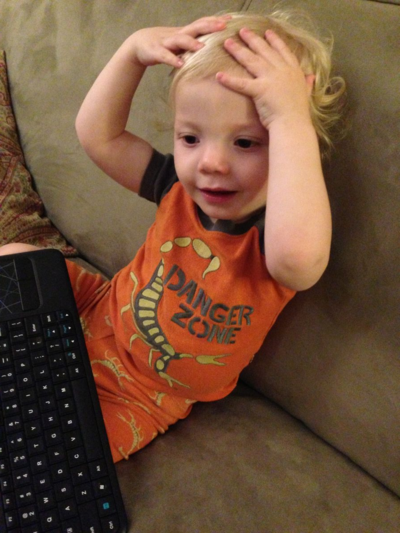 And I suspect he's getting tired of me taking a million photographs of his beautiful hairs. 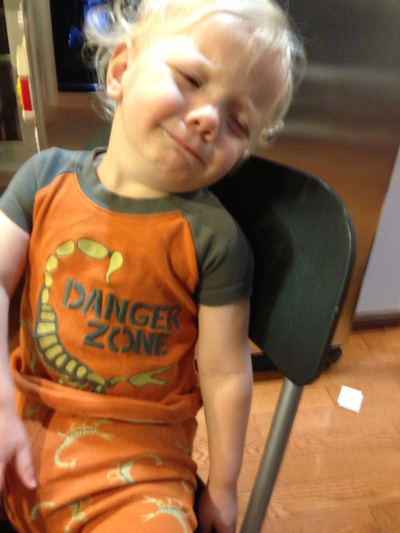 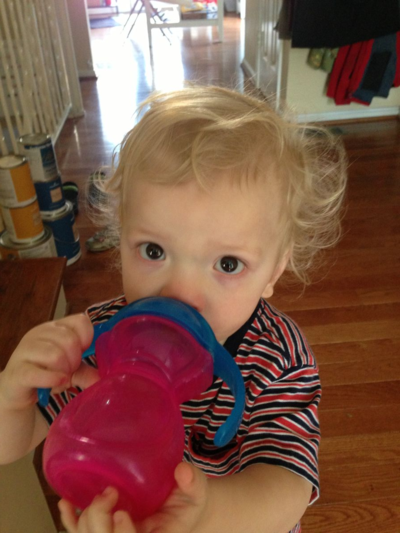 (Please ignore the pile of paint cans in the background. I'd put them away except the kids like building a drum set out of them. And then fighting over the paint-can drum set. Even though we own an actual goddamn drum set. This Christmas I'm giving them gift cards to Home Depot and a box of plastic bags.)

(Also, If you'd like to have your shit thoroughly freaked out by GENETICS, HOW DO THEY WORK?, I suggest poking through the archives in the June/July/August range of 2007.) 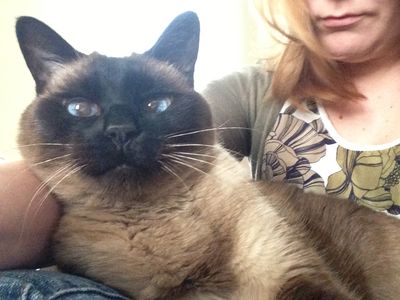 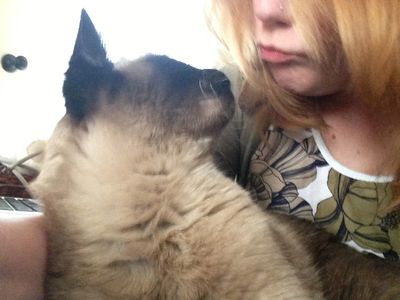 (Please ignore the...ah, fuck it. There are random computer cables, a double chin and a curtain pullback that my husband hung too far away from the window to be useful. THIS IS REAL LIFE.)

I have been reading your blog for years. When I discovered it in 2008 or something stupid I went back and reread from the beginning. But these kind of posts are some of my favorites. The random layered upon random draped in hilarity with a side of NOM NOM NOM.

Real is what we need. With ceiling snails and unicorns and can you put that glaze in a paper bag so I can sniff that shit in private? Ike's hair and Ezra's concentration make me happy and fuck laundry. I'm wearing a shirt from one of the random piles. I did not sniff it first.

Oh girl. The chin thing-I turned 35 and though my weight has not changed, its like I have this little pouch under my chin making it doublish. I pretend it just sometimes happen in pics and not in real life. Its like my jawline is slowly becoming a memory.

Real and true and normal are GOOD THINGS! That's how we help each other lower the overall level of crazy. I've been suffering from Facebook induced depression because I'm scared to post a picture of the CLUTTER.

What is that amazingness on the end of your table with the roll of paper? Where is it gotten?

OMG I DIED at the Archer reference. PERFECT! I saw Ike's shirt and immediately heard him say "Daaanger Zowwn!" Thank you! You made my day.

No Faaaaaaair! Ike has the hair I want, and Ezra has the eyelashes.

The paper roll thing is from IKEA; they cost half-nothing. I actually have one, that friends of ours who live in a city with an IKEA bought us for Xmas. I, however, live no where near an IKEA and the paper roll refills - also from IKEA - might as well be made out of the hair of those bathtub unicorns for what the shipping would cost.

HOWEVER, I can vouch for the awesomeness of the paper roll thing as long as you live near an IKEA.

You have seriously been extra hilarious lately. I never actually laugh at stuff on the interwebs, but even my husband is asking me what's so funny :)

My son's hair is curly in the back and even though he sometimes looks like a mad scientist or a hobbit, there is no way I'm cutting his hair either. (imagine a Lana-style "Nope!" here)

Ezra and his bath letters are seriously adorable.

Ike's hairs are glorious!! My third born also has curly hair. Love it!

And yes, of that whole entire entry of skimming, that's what was all BAM!

So, how do you prevent Max and/or Ceiba from eating those letters? We had them when my 5 year old was littler (toddler-ish), and my stupid frickin' boy cat ate several of them. He somehow survived, but puked up every last piece of foam - everywhere.

So, do you preface your conversations with teacher and doctors with, "I'm not actually worried about this, but I think I'd like a kid to do x, so Imma mention it right now, so it will be happening in 24 hours?"
Timing - your kids haz it.

Christ Godddd his hair is yumzz! Would it be awkward to ask you to send the clippings to me that I can make a new weave out of them..summertime is coming and I need to get my Nikki Minaj on...;)

Ooooh, I had the curls cut off my oldest son. The only reason I finally gave in is because I grabbed the wrong child at daycare and almost went home with a little girl.

Do you realize that I did not notice any of the "messy" things you pointed out until you pointed them out? I actually had to scroll back up and search!

And I still don't see any double chins!

My three chins are nodding right along with you about cutting toddler hair. I just about passed out when my husband finally took our first boy to the barbershop for a trim.

Oh my god, for a second I thought you were going to show a post haircut Ike photo and I almost cried. Whew. Glad we dodged that bullet.

Not to be all Montessori-Kool-Aid-Krazy-Lady, but that is totes how Montessori works: nothing and then BLAM genius.

I had my bathroom tile reglazed and my dude had a fan running out the bathroom window and wore a mask and recommended my dog and I relocate to somewhere else for the majority of the work. It still smelled the next day, but now it looks amazing (instead of like the 70s threw up in there)!

What a great week...I think you're right on about keeping those curls around for a while. ADORABLE!

I love this so much. I'm going to quote you word for word the next time someone tells me it's time to cut my 20 month old's hair...which looks exactly like Ike's, except it's red! No scissors, no jokes about cutting his hair while Mommy isn't home, etc. I know exactly how you feel, Amy!! This post is hilarious. :) Thank you!