Drama With a Capital I-K-E

IKE enters from right. He is four days away from his second birthday.

MAMA stands uselessly to the left. IKE surveys her empty hands with disappointment; she has failed to read his mind and anticipate his every need once again.

IKE crosses kitchen and points dramatically at cabinet where cups are kept.

IKE bursts into hysterical tears over the agony of having his words understood.

IKE interprets her words as "no cup" and shrieks with anguish because MAMA is a terrible cruel cup-withholding monster.

MAMA is confused. She once again offers the cup.

IKE crosses his arms and stomps his foot.

(SCENE carries on like this for a few minutes until MAMA realizes IKE is simply demanding a different cup than the one in her hand.)

IKE crosses over to HIGH CHAIR and gives it a kick for no apparent reason. His behavior causes MAMA to stop and stare at him, because seriously?

IKE realizes she has stopped closer to the refrigerator's water dispenser than the door handle and promptly has another meltdown.

MAMA opens the refrigerator and pulls out both milk and juice, in hopes of giving IKE a sense of control in a world full of emotional beverage-related turmoil.

IKE points to the milk.

MAMA puts juice back in the refrigerator.

MAMA: (silently, to self) Lord. Have. Mercy.

MAMA: (to IKE) Miiiiiilk. Or. Jooooos.

IKE points to the milk.

MAMA puts juice back in the refrigerator; fills cup with milk.

IKE lies down to kick and pound on the floor like the biggest cliché of a temper tantrum you have ever seen.

MAMA sets the cup of milk next to his head and backs away slowly.

IKE pushes the cup away and bangs his head against the floor with a defiant NO, then cries because that hurt. Because no shit that hurt.

MAMA leaves the room to go get her camera to document this over-the-top ridiculousness, because she's kind of an asshole but also she kind of earned this one, you know? 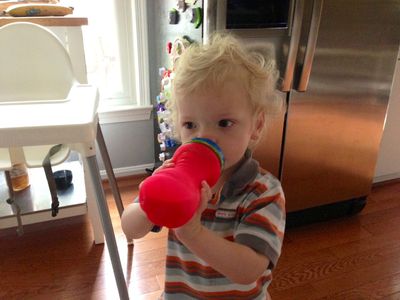 He was fine. He smiled at me and then we cuddled on the couch. 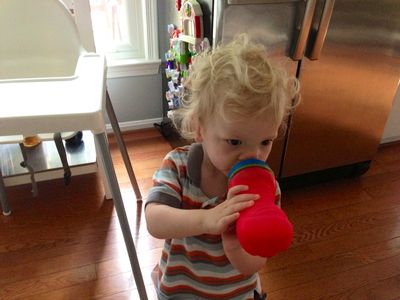 I think he was just really thirsty.

He may be thirsty, but he is also 2. I remember reading something about toddlers that said when they make a choice between 2 things, they don't understand that they only get the thing they chose. It makes you feel crazy (see scene above), but really... THEY are the crazy ones.

Ooooooooh, that hair! Love it. Wondering if our littlest is going to have the crazy baby curls like our oldest did.

SO glad that this is standard toddler behaviour! Good lord, my 2 year old is just a bundle of drama and "noooo not dis one ahhhhh ha ha ha" lately.

Documenting it for future use is a great idea. I think I'll pull out the video camera next time!

This hit sooo close to home. So close.

This is exactly, exactly, exactly what my 21 month old son does. With the milk/juice misunderstandings and the head-banging tantrums. It's like living with a very small, very angry foreign exchange student.

Yes. My life. In a nutshell.
Except, I swear out loud. I know I will regret it but eh, he is my last one.

You are horrid and unfit for not knowing what he needed before he thought to need it. Seriously, you'd think three humans in you'd have gotten the hang of this shit. (Still saying Baby in front of IKE. Because of reasons).

I've got one of those also. No google translate for Toddler, is there?

You just documented my life.

OMG, with the curls.

Ugh, this age. that pretty much sums it up. we are (crossing fingers because I'm totally jinxing it) finally leaving this stage. I was helpless in its grasp. grabbed camera often, made sure child was not about to hurt herself and then video'd it and sent it to my husband to say "hey, how's your day going?"

James and I had an epic battle yesterday because I gently told him he couldn't put his crocs AND his sneakers on at the same time. Finally I went and sat on the front porch by myself while he screamed inside.

I love your writing style! I also love your stories, and the fact that you are describing life with my current two-year old perfectly.

Yep, it's tough to be Baby.

Also he is so precious with the squished nose and the curls. I just want to squeeze him!

My twin sons suddenly became toddlers this weekend (it was not a gradual change, I swear, babies one week, children the next). I have seen my future here, I'm not sure if I'm ready.

For a minute I thought you were in my kitchen with my 22 month old!!

So I know it's a while away because my little bit is only 8 weeks old, but I can't wait for this! I think all the craziness will make awesome stories. :) Ike is the cutest little squishy by the way. I love his curls!

This is exactly what I needed to know at this very moment: that even experienced moms can't prevent toddler meltdowns. Also needed: a good laugh. Thanks for both!

I think you should have a girl. You have at least a decade before they reach this stage, generally speaking...

With a story about Ike, why would you then post pics of toddler Noah? ;)

SO pleased to hear this is going on in your kitchen as well. 100 times a day here. *MAMA bangs HER head on table*

Man, I wish there were Like buttons on these comments.

Holy crap, this is my life right now.

Until they can talk... Then you have tantrums because even though they can communicate exactly want they want, candy right before dinner is not mama-approved!

If I had a blog and if I was funny, I could have posted this exact thing today. My daughter and Ike might be soulmates. They can ask each other for things with the wrong words and then scream at each other for getting it wrong for the rest of their miserable lives.

Insert Ben where you have typed Ike and you have my life lol. I swear you have a window into my kitchen this morning!

I have six (crap! must make birthday plans, like NOW) weeks until LO turns 3 and this? This is just a little too close to home as there is still much wailing and whining and full body floor thrashing because I did not understand perfectly on the first request.

This is perfect....you are perfectly calm in the face of mayhem...an experienced mom indeed!

Am I the only one who thought you might combine the juice and the milk? That could be hilarious.

Replace Ike with Alex and this is pretty much our everyday. We get a lot of "More more more" (with signing and verbal words) - "You want more?" "NOOOOO!" "All done?" "NOOOOO More more more" "Okay, here you go" "NOOOO" *Dramatic throwing, whacking head against floor, etc.*

Not to laugh at your situation, but the first thing I thought of was the Snickers Commercials where people turn into monsters when they are really hungry. I guess "monsters" also rear their ugly heads when they are very thirsty as well.

This accurately captures the very essence of parenting from birth to get-your-own-damn-apartment-already. My kids are 10 and 12. My conversations with them involve bigger words but similar drama and me standing there going ".....".

Smile and nod, smile and nod. They'll eventually pick up the sippy cup and realize it was what they wanted all along. Mama was right. Mama is always right but no one knows it.

Who else totally lost it at: "Four days til Ikey is TWO !~!"

When did he turn One for cryin' out loud ?~!

Ugh. I feel your pain. Mine turned two on monday.

Ours (third) is 18 months, and whoever said 'have a girl' -- ours is! And my GOODNESS your morning describes, perfectly, our every interaction. Put me in the stroller! NOOOOOOO!! BUT DON'T TAKE ME OUT EITHER!!! NOOOO!! Not in! Not out! Not in between, no I don't WANT TO BE IN BETWEEN. But, like Ike, she is cute ... so we'll keep her.

Reminds me of the infamous "Juice & Shoes Debacle of 2001". When my daughter was 2, the way she said Juice and Shoes sounded almost exactly alike, causing one memorable meltdown at Disneyland.

Sounds like our house lately. This morning: my toddler (20-months) didn't want to be put down, and yet was upset because she was hungry and I wasn't making her breakfast, due to having a large child in my arms.

MAKE UP YOUR MIND. I'M EXHAUSTED.

Ah, all I could do was laugh. Been there so many times with my 2.5 y/o. I have filmed a few of them for future blackmail. The best is the sobbing screaming one for chocolate.

I love that kid. My son is one month older than Ike, has the same awesome hair, and I don't cut that shit either. And he also pitches tantrums over absolutely nothing. I do wish I could cut THAT shit.

Oh, thank goodness, we all seem to have this same scene in our house sometimes. I have 2 that turned 2, 2 days ago. And, yes! I am a meanie Mommy monster for not knowing the request before it is requested. Thanks for the empathy post today!

Wow - that exact scene could have been us - just replace the name Ike with Reese and it's my story about 5 times a day! :( I feel your pain.

I love Ike. I do. I really really do. I think he's my favorite of your kids. Next to Noah. And Ezra.

My daughter is a month younger and that scenario is completely familiar. They are SO gorgeous but SO irrational at 2.

as i was laughing at this post i had to turn to my husband and explain that evidence of other people's children doing the same insane shit that ours does is comforting to me. for some reason reading stuff like this does not give him the same peace (and added patience) that it gives me.
he'll never learn.

Yep, same exact scene every single day! In fact, my two year old just threw a fit because he wanted his mmmbaba (his word for cup, said like a French person would say it), I told him it was on the table from lunch and go get it. He came back with an apple, but happy.
I once videoed him walking around the house screaming and crying because I wasn't meeting his mysterious demand.