It's Ike's birthday tomorrow. But bear with me for just a second. I'd never even heard of Alabama Shakes before they were on SNL back in February. Jason and I were sitting on the couch (on Sunday morning, naturally, watching a recording because we never stay up that late anymore) when they first took the stage and started to play "Hold On." We both sort of...froze after a minute, as we were hit with that thunderstruck feeling you get when you hear music that you just really, really love. And I loved everything about them. The rich, Janis-like voice coming from the lead singer; the crazy, completely unselfconscious way she contorted her mouth to create bluesy, primal sounds; the way the whole band let the song casually, effortlessly unfurl with a slow burn to a frenzied climax without thrashing around on stage or pyrotechnics or or props or naked body paint dipped in glitter. Just good, old-fashioned rocking the hell out. It probably took me all of 30 seconds to go from "Who?" to "Holy shit, I need this music in my life every single day from now on." When the song was over, Jason and I looked at each... Read more →

Drama With a Capital I-K-E 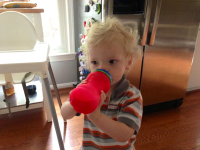 SCENE: KITCHEN IKE enters from right. He is four days away from his second birthday. MAMA stands uselessly to the left. IKE surveys her empty hands with disappointment; she has failed to read his mind and anticipate his every need once again. IKE: Cawp? Zee? Cawp? MAMA: Um. Wait. Do I know this one? IKE crosses kitchen and points dramatically at cabinet where cups are kept. IKE: CAWP. MAMA: Cup! You're thirsty! Okay. IKE bursts into hysterical tears over the agony of having his words understood. MAMA: No! No cry! Look, I will get you a cup. IKE: NO! MAMA: No...cup? IKE interprets her words as "no cup" and shrieks with anguish because MAMA is a terrible cruel cup-withholding monster. MAMA is confused. She once again offers the cup. IKE: NO! NO NO NO! IKE crosses his arms and stomps his foot. (SCENE carries on like this for a few minutes until MAMA realizes IKE is simply demanding a different cup than the one in her hand.) MAMA: Cup! IKE: CAWP! MAMA crosses to refrigerator. IKE crosses over to HIGH CHAIR and gives it a kick for no apparent reason. His behavior causes MAMA to stop and stare at him,... Read more → 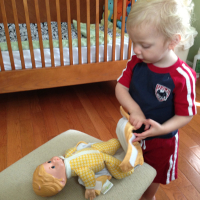 So I took one day off — ONE DAY OFF — to barbecue and visit with friends and binge-watch Arrested Development (ANUSTART) and of course I have been running around like boiling spastic hot ham water all day trying to get caught up on all my various work-y things. Well, not running, obviously. Just...sitting at my desk typing V. V. FAST and trying to keep the number of open browser tabs down to a reasonable number. Like 42. Do this thing! Then that thing! Abandon that email mid-sentence to go to some other thing just so you can include the fact that you did that thing in your email, thus making yourself sound all capable and on top of all the things. Meanwhile, in real life: AAAAAAAAAEEEEEEEEEEEEEEEPPPPPPMAHGERD NOTHING IS DONE AND EVERYTHING IS TAKING MORE MINUTES THAN I HAVE MINUTES TO SPEND GAHAGAHAGAHAGAHAGAHAGHAGHHGGH You should hire me. I am not at all a complete freaking organization nightmare. Am bit of a liar, though. SEGUE TIME. IT'S A BRIDGE TO NOWHERE. I have a couple actual things I want to write about, but as it's definitely looking like I will not have time to write about them today, here are some... Read more →

My Writing Process. Let Me Show You It.

I spent approximately two hours today trying to turn a half-formed zygote of a blog post idea into something publishable. Or at least something longer than 140 characters, because otherwise I could just tweet it but then I still wouldn't have anything to publish on my blog but I can't publish a goddamn tweet on my blog because then what? I go on Twitter and link to my blog and people click over and are like, GODDAMN YOU AMY, YOU COULD HAVE JUST SAID THAT ON TWITTER, WHERE I JUST WAS. AND YOU WERE. WHAT THE FUCK. UNSUBSCRIBE AND DISLIKE. Basically: Blogging a tweet and then tweeting about a blog that's basically a tweet would be a dick move, or worst case, rip a hole in the fabric of the social media universe and the whole Internet would collapse in on itself, and then Yahoo! would come buy the smoking, hollowed-out ruins for fifty bucks, we'd be all "KHAAAAANNNNN!" except it'd be like "YAHOOOOOO!!!!" and POINT IS, I saw the new Star Trek movie on Friday and it was okay. (Wait.) No. I mean, POINT IS, I scrapped the blog post I was writing because it was only 12 words... Read more → 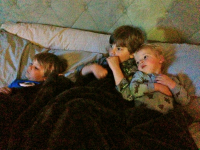 IN WHICH I POWER-RANK MY CHILDREN IN ORDER OF THEIR GENERAL USEFULNESS AROUND THE HOUSE ROUND ONE: CLEANING UP TOYS Okay guys, we need to clean up the Legos. Every single Lego needs to get picked up and put in the blue Lego bag over there. Got it? Go. EZRA Sits down, then puts forehead on floor. Sl-o-o-w-ly picks up a single, solitary Lego brick. Scoots belly-down like a slug over to Lego bag. Sits up, stares at ceiling. Holds hand over bag and lets Lego fall through fingers. Lego hits the bag and immediately bounces back out onto floor. Collapses in exhaustion. Score: 1/5 NOAH This is going to take forever. FOREVER. How long is this going to take? FOREVER. I never get to do anything because I have to clean up all the time and also FOREVER. I'm not cleaning those Legos up because I'm still playing with them. And I'm not cleaning those Legos up because even though they are right in front of me I have gone selectively blind. I will clean those Legos up, at least, but only after I've spent 10 minutes complaining about them, which equals approximately three-and-a-half FOREVERS. Score: 3/5 IKE Hurls... Read more →

Our House, In the Middle of the Living Room 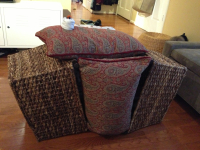 Because I am mean and horrible (and/or about to shit a primary-colored plastic brick if I step on one more goddamned bloody Lego), I recently banished all toys from our living room. All. All the toys. Hereby, I declare: None toys in the living room. Originally, in an aspirational what-family-do-I-think-lives-here frenzy, I gave board games a pass. I stacked them up neatly in a relocated buffet behind the couch, all pieces sorted and intact, a organzational masterpiece that lasted exactly 15 minutes before Ike pulled every single game out and upended them all over the floor. So if we WERE the kind of family that held regular Game Nights*, the only option at this point would be some bastardized unholy version of Sorry , I Let the Pigeon Drive the Bus to Your Operation While Wearing a HedBanz and Then Some Underfed Hippos Ated The Hospital and A Bunch of Hotels . But you'd have to pretend to roll the dice; we no longer have any. *Note: We are not. We are all entirely too competitive and it always ends badly. Also, Noah cheats. I SAW YOU MOVE AN EXTRA SPACE. IT'S NOT FAIR. I WAS WINNING. JA-A-SON, STOP LOOKING... Read more → 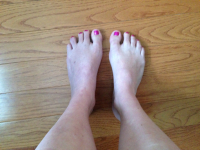 Lookit! I have a matching set again! Like so many of my life stories, the One About My Foot eventually resolved itself in a boring, drama-less manner. I know many (MANY) of you were convinced that it was, in fact, broken and I'd gotten a shit diagnosis, because there's no way a human foot should look...well, like a bloated zombie appendage from an Eli Roth film. It was not broken. It turns out I tore two ligaments, one on either side of my foot. The outer ligament tore completely, which would account for the horrid popping sound and sensation I heard as I toppled over. That was a Level 3 sprain; the valedictorian of sprains; the kind that can fuck with you for life. Huzzah! The inner ligament (which I was informed is much harder to tear, and my doctor was basically like, "HOW DAFUQ?") only tore partially. A Level 2 sprain. Which: Pfft. The other side of my foot is not impressed. Sack up, ho. The initial swelling and bruising that I subjected y'all to was likely made worse by the fact that 1) I continued to hobble around on my foot in Vegas, because VEGAS and it's not... Read more →

Happy Day-After-Mother's Day! What? Totally a thing. Do you have any idea how much extra it costs to have a blog entry delivered on a Sunday rather than a weekday? Such a racket, and I will not be a part of it. Same warmed-over content, different day, is what I always say. I slept in until 10 a.m. yesterday. Ten ay effing em. I slept in so long I had at least three dreams that involved me waking up and getting out of bed, only to actually wake up about 10 minutes later, fuzzy and coccoon-y. And then I would roll over and go back to sleep. I'd foreseen what getting up and out of bed was like, and frankly it seemed pretty overrated. Later (much later, almost embarassingly later) we took the boys out to lunch. Ezra brought along a rock that he claimed was a dinosaur fossil; it looked exactly like a fist-sized turd. Noah became entranced with the restaurant's fancy folded napkins and spent the entire meal asking me if he could take one home; I said no; our waitress said yes; we are now the proud owners of a syrup-covered napkin still tightly rolled into a... Read more → 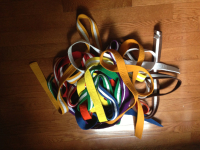 Last week, Noah decided that he wanted to quit karate. I've always told him it's okay if he wanted to quit karate (usually mid-argument over getting his uniform on and out the door in time for class), but he's always insisted that no, he doesn't want to quit. He wants a black belt. Well, that's not technically true, I guess. There was one point in kindergarten when he said he wanted to quit, but didn't like our stipulation that sure, you can quit, but you need to go tell your teachers in person. He waffled for a bit, then finally made it into the office, where he quickly changed his mind after 30 seconds of pep talk from a specific instructor. (Who he worships, but kind of in the same way one worships a terrifying, vengeful god.) He kept at it and seemed to be even more dedicated to the black belt goal than ever, after that. This time, that particular instructor is out on maternity leave, and he had no such qualms about sauntering right in and quitting. And my bluff was called. I don't WANT him to quit. Sure, I can think of a million other things I... Read more →