Happy Day-After-Mother's Day! What? Totally a thing. Do you have any idea how much extra it costs to have a blog entry delivered on a Sunday rather than a weekday? Such a racket, and I will not be a part of it. Same warmed-over content, different day, is what I always say.

I slept in until 10 a.m. yesterday. Ten ay effing em. I slept in so long I had at least three dreams that involved me waking up and getting out of bed, only to actually wake up about 10 minutes later, fuzzy and coccoon-y. And then I would roll over and go back to sleep. I'd foreseen what getting up and out of bed was like, and frankly it seemed pretty overrated.

Later (much later, almost embarassingly later) we took the boys out to lunch. Ezra brought along a rock that he claimed was a dinosaur fossil; it looked exactly like a fist-sized turd. Noah became entranced with the restaurant's fancy folded napkins and spent the entire meal asking me if he could take one home; I said no; our waitress said yes; we are now the proud owners of a syrup-covered napkin still tightly rolled into a rosette shape that I am not allowed to wash.

At the end of the meal I emerged from the restroom to see a half-dozen waitstaff hovering around Ike's highchair and I ran over, all OMG WHAT DID HE DO NOW, and a waiter adorably thought I was concerned that he was hurt, when in fact that hadn't even crossed my mind. I just assumed he'd made a spectacular mess of some kind.

(He'd dumped an entire cup of milk on himself and the floor. The mess was indeed, spectacular.)

As we left, an older couple looked at me with a mixture of bemused pity. "Happy Mother's Day," the guy practically guffawed as I corraled my turd-rock-hauling preschooler, my napkin-obsessed first grader and my milk-soggened toddler out the door. I laughed and thanked him anyway, because the meal really had been about 78% more successful than anticipated; also I'd had two mimosas and seriously did not give a shit about any of the shit.

Besides, like I can stay even mildly annoyed at this face. 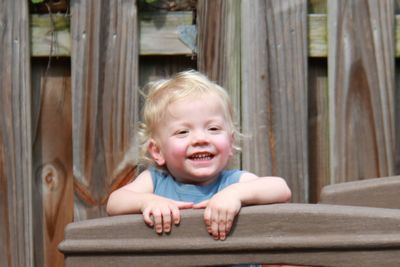 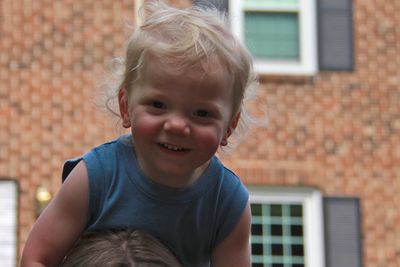 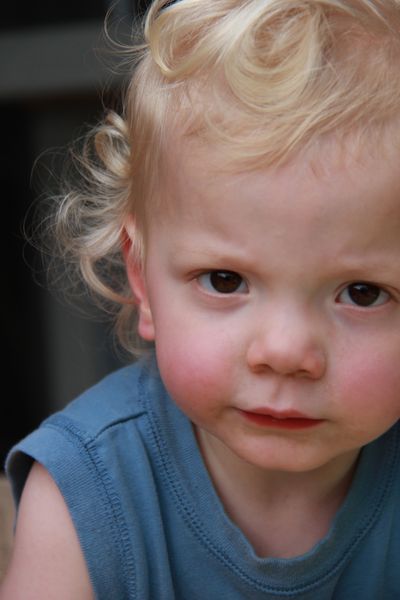 That last photo is the one that's killing me. So tough and so tender. Love it!

He's getting Noah hair! Love it!!

Your blog will be the perfect place to reminisce when they're older. Oh, and that baby's cheeks! Nom nom nom....

That last picture of Ike is amazing. He looks like a baby version of Patrick Swayze from The Outsiders.

That face is one of "my favorite things!" Happy Mothers Day!

Happy Mother's Day! Thanks (again) for the laughs.

The HAIR. I can't even handle it. And the beautiful toothy smile - just too much.

Omg the curls! Aghhh he's so cute it's ridiculous!

Your children never have boogers hanging out of their noses. How do you do that???

Babies in tanktops! Is there anything cuter? I just love it.