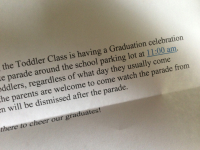 I believe I have discovered THE biggest difference between life with a singleton firstborn and what it's like by the time you're on your third. When Noah's preschool sent home announcements about parties and other special events, Jason and I would both immediately clear our calendars and charge up the camera batteries. And the backup camera batteries. I chaperoned every class trip, never missed a field day and have dozens and dozens of photos of him eating cupcakes with his classmates, none of whom I remember the names of anymore. But it was all nothing but magical preshus memories and dammit, I was going to be there for every single one of them, even if it killed me or got me fired from all the things. The concessions started when it was Ezra's turn to start school. Usually only one of us could attend the parties or picnics, though thankfully his school never had as many as Noah's. (Or maybe it did, and I simply got lazier about checking his various backpacks and hoard-boxes for notes and missed them all.) We had an informal sliding scale of parental priority: An IEP meeting was worth both of us taking an afternoon... Read more → 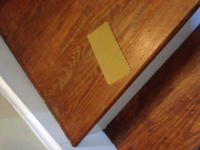 Ike's actual birthday was very low-key. Which is bullshit-speak for "boring." Or perhaps: "HE'S TWO. PLAYING WITH BUBBLE WRAP IS STILL THE PINNACLE OF HIS LIFE EXPERIENCE." I'm glad we didn't have any big ambitious plans, however, since on Friday Ezra came home from school, scarfed down his usual four pounds of lunch and then set off to amuse himself doing...I don't know exactly what. Something in the basement? Backyard? LOOK WHATEVER IT'S NOT LIKE HE WAS PLAYING IN THE STREET. I PROBABLY WOULD HAVE NOTICED THAT. (EVENTUALLY.) Anyway, I am not the one on trial here for negligence, but at some point I realized Ezra had crawled on the couch, covered himself with a blanket and fallen completely asleep. This is never a good sign — four year olds don't sleep in the middle of the day for any sensible sort of reason, like being "tired." But because the Occupational Therapist Formerly Known as Ms. M___ was coming over shortly for dinner, and because I am selfish and starved for actual human interaction, I decided to let him continue sleeping there and just vacuumed and fussed around him in my attempt to get my house a couple steps above... Read more →