Just When You Think You Are Out...

I'd estimate that about half of the questions I get over at Ye Olde Advice Smackdown these days are about sleep. Sleep and babies, that is, as in how to get them to go the fuck to it. I'm (obviously) no expert here — I've read maybe two whole books on the subject and probably not all the way through because they have hardly any zombies in them — but I guess people figure that after three babies who were all over the sleep map I MUST have done something right in order to get them all to the point we're at now: Three mostly non-damaged children who sleep through the night. In their own beds! At a regular bedtime, even! It is a glorious thing, to no longer feel so singularly consumed by the Pursuit Of More Sleep, or to worry that you're doing something wrong and not instilling the right boundaries or self-soothing skills. The sense that you COULD be getting more sleep than you are if you just did CIO or co-slept or breastfed or formula-fed or added solids or listened to whatever crackpot theory your mother-in-law is talking about. I read those long, detailed emails from... Read more →

An Annotated Guide to the Perfect Home Office 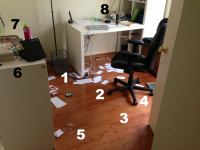 You know, I don't ask for much when it comes to a home office. I'm really just happy to have a desk. A computer. My AP Stylebook . An electrical plug is helpful, as is a chair. I mean, that's definitely gettin' a little fancy there but I think I've earned it. (I'd include things like a combination printer/scanner but mine's been flashing COMMUNICATION ERROR at me for seven months now and I've survived just fine.) In other words, I don't really expect my home office to be any great aspirational haven. I mean, it's hard to get too uppity about it when you share your workspace with a litter box. I tend to view it more as a room I hunker down in for a few hours a day and then am happy to leave behind all weekend. There might be a flaw in that last part, as I disovered this morning. 1) An entire box of very sharp (yet very small and hard-to-see) metal screws, dumped out by Ike, discovered by my feet. 2) Index cards, also courtesy of Ike. (Why do I own index cards? I never use index cards. I have no memory of ever purchasing... Read more →

The Cacophony of Brothers 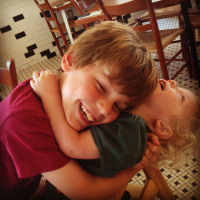 "Noah hurt-ed me!" "STOPIT Ezra!" "Ikey TOOK. MY. TOY!" "Mo-o-om, make Ezra stop looking at me, okay?" "You're not NICE, Noah!" "IKE! NO!" *assorted frenzied shrieking* *and etcetera* They fight over toys, they vie for position and space. They kick each other under the table and careen around the house like out-of-control bumper cars. They want what HE has, until they get it. We have to keep track over who got out of the bath first last time, who got to sit next to the faucet, who got to choose the night's TV show, even though it doesn't really matter: whoever's turn it isn't that night will inevitably protest that it's NOT FAIR. Everything's a race, even when it totally isn't. Even hugs will eventually give way to tumbles and shrieks and accusations of injury. Ike's learned how to hit, thanks to his brothers, and yet they turn to me with shock and fury when it happens, as if I'm the one at fault. Did I not SEE THAT? Am I not going to DO SOMETHING? I wonder what their relationships will be like when they're older. If they'll be close or strained or just so fundamentally different or geographically... Read more →

Swim Camp By the Numbers

ER-Worthy Injuries Sustained 1 Items Lost: 1 water bottle 1 pair of goggles 2 ice packs Items Lost, Then Found: 1 lunch box 1 pair of Superman underwear 1 entire goddamn backpack, because that's what happens when everybody buys the same identical backpack that was on sale at Target Items Gained: 2 pairs of hot pink floral underwear, size 4T, probably because of identical backpacks OR SO I REALLY WOULD PREFER TO THINK Overwhelmingly Noisy Sensory Nightmares Endured: 1 end-of-camp "Swim Show" complete with songs and chanting and a million people ahmahgahd Asses Kicked: ALL OF THEM. Friends Made & Counselors Crushed On: (Awww) Jealous Siblings: 1, big time Awards Received: 1 for "Caring" 1 for "Honesty" 0 additional context provided, other than "I cared about the kids" and "I didn't hardly tell any lies at all" Read more →