Back when I thought we "needed" to move, a bigger backyard was probably on the top of my list of "reasons." You know, for the kids. So they'd have room. To play. 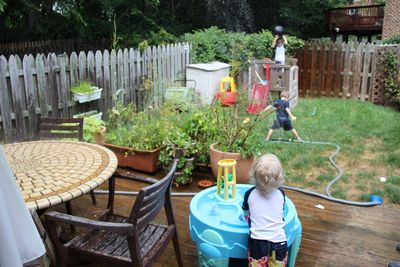 Our backyard isn't perfect. It's on the larger size for our townhouse community but still not what I considered ideal for three growing children, or for entertaining more than like, two additional people. We're not allowed to have swingsets or playsets that are taller than the fence. The drainage isn't great so the grass is perpetually dead on that one side and a couple hours in the sprinkler means the whole yard is vaguely swampy for the next two days. The soil is crap. Our gardening options are limited to what we can grow in containers on the deck. Blah blah, whine whine, nit, pick.

I remember my childhood backyard being huge. I remember endless stretches of grass and a tree swing and a secret fort in a wide hedge of bushes and having room for a swingset AND a slip-n-slide AND a sandbox AND endless adventures. I wanted something like that, for them. (Though I fully admit I was being willfully obtuse to the reality of CARING for something like that, yes.)

Noah never wanted to move. He was adamantly opposed to it. The whole business became the "M-word." I tried to assure him that we won't move very far, that he probably wouldn't change schools and we'd take everything with us and that it would be fun and awesome, because a YARD! A BIGGER ROOM! Your OWN ROOM! And did I mention the YARD? The mystical hypothetical YARD of HUGE?

One morning, after getting on the school bus, he rushed to an open window just to scream "I'M. NOT. MOVING!" at me (and the crowd of other assembled parents) as the bus drove off. He'd pull stuff out of bins and boxes that I packed up for storage. He'd sneak back downstairs after bedtime to make sure I hadn't put anything else out on the curb.

"Our yard is FINE!" he'd say, completely exasperated with me, whenever I attempted to win him over to the moving plan with talk of a swingset or tree fort. "Our yard is the PERFECTEST YARD EVER."

When I drove past the old house last month — on the same weekend we'd originally planned to put our house on the market, only to change our minds at the very last minute — I was almost ridiculously confused by it. The yard had obviously shrunk. Was it...erosion? Some kind of bizarre tectonic plate action happening in suburban Pennsylvania? There was no way the yard I remembered — a yard I spent hours of every day for years in — was the same yard I was looking at. How in the world did we ever fit a swingset AND a slip-n-slide AND a sandbox back there? The trees and hedges had all been cleared (probably for space), and yet the yard still looked so small and narrow and frankly, like quite a few yards Jason and I had driven by back here in Maryland, slowing to a stop by the FOR SALE sign, only to sniff and shake our heads because ehhhhhh, that yard's kind of small and narrow, don't you think?

So no, our yard isn't perfect. 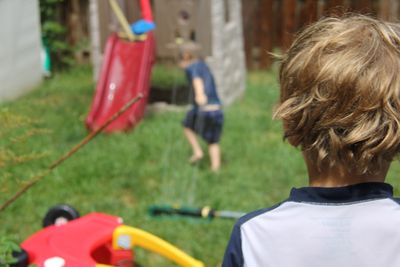 But it's still the perfectest yard ever.

Your yard looks great for them! And can I say....I have a large yard (MUCH upkeep), and we have a large swing/playset, a sandbox, and a playhouse and lots of room for running. And my (single) 6 year old child REFUSES to play out there 99% of the time. Visiting children love it...glad I do all that upkeep so 'visitors' can enjoy! Want to come visit? hehe.

Our townhouse backyard is tiny, literally postage stamp size. I lament not making a better choice, especially since it is also shady and buggy. Bah. Now I want to go house shopping.

We have owned two houses since having kids, and the yards were really big for our neighborhoods. I grew up in a semi-detached house (ie a duplex) in SE London, so to me, these yards were huge. But whenever we visit my parents, my kids spend more time in their back garden than they ever did in our own backyard. Those big yards were too big, and too "far away" from the house, but in London, my kids can be at the back of the garden and can still feel close to us in the house which is great, because young kids are like dogs and have to be near their people at all times. Big yards are overrated.

Of course now, we have moved to a rental apartment with very little green space and now I wish for even a postage stamp of grass to call our own, instead of the green space behind the apartment that is pretty much a toilet for all the dogs who live in the complex.

Growing up I really did have a HUGE yard... And a pool, and a huge garden. But it was a FULL time job for my dad to take care of it. We had a treehouse. I fell out of it a lot. I don't necessarily want that for my own house... I just know I would be bad at upkeep. But I agree that boys need a place to play, a place to "adventure"... One day. One day, Amy. And if not in your backyard, it will happen in someone's. I had a lot of friends in my backyard, and they appreciated it as much as I did.

It's funny how things we remember as enormous as kids were actually quite small. I also remember my childhood backyard being huge, but it wasn't. Also: I love your patio table! Where did you get it?

Everyone will probably be sharing stories of their own childhood, so I will too. I remember my mom looking forlornly at my bedroom and asking, "Is your room too small?" I though she was plum-crazy. My room was perfect to me and it never even occured to me to want a bigger one. I think you are raising some well grounded young men!

To me, that is the perfect yard. Big enough for your kiddos to run around, small enough that you're not spending all weekend caring for it. And, clearly, your darling boys love it.

Now, tell us more about your deck gardening. I want to start a small garden next year, but I don't know where to start!

Yes - we have the giant backyard, with a garden that stretches the entire width. I actually bought a big playhouse to put in the garden to take up some of the space, because ZOMG we spend all.damn.weekend out there fighting weeds, trying to figure out what's eating the strawberries (turns out it's our 2.5 yo), cleaning up the toys - when the kids are perfectly content to play IN the compost bin.

I know, braggy complaining, but we do actually drool over houses in our area that have smaller yards, so we could spend less time working on the yard and more time enjoying it.

I, too, have fallen into the "we need more space" funk, only to realize that A. I never want to pack up everything and put it on a truck only to unpack it (I may have been scarred by a mobile young adulthood) and B. No one will buy our house anyways.

Then I realize that if I tossed out about half of the junk we have laying around, it would seem a lot bigger. That's my goal this summer - to toss as much as I can.

Once when leaving the mall during a torrential downpour I made the decision to ditch my 4-1/2 year dirty, old, broken umbrella stroller and grab her hand to make a run for the car. She's 20, and she still remembers the day I abandoned her beloved stroller. From her reaction that day you would have thought I abandoned HER, not the stroller. Similarly, since she is off at college in another state, we were considering downsizing to a more affordable house (mostly to make sure we could pay the tuition bills - "bursar" seems to be our new email buddy). We've been in the house 8 years, I thought it was so perfect for her when we moved there - walk to town, huge yard and pool, cool basement hangout room, etc. - she never voiced any opinion on any of the things I thought were so cool. But at the mention we were "thinking about" moving, she told us (again at age 20) that it was the perfectest house ever, all her friends love it, it's the perfect location to meet and hang out, etc., etc. - you think she could have waited any longer to reveal her passion? KIDS!

Our perception is different as kids. Is it because we're lower to the ground? I am not a scientist; I'm just here for free Fritos. I remember the first time I went to my mother's house when I was an adult. It had been a few years but I noticed how small the yard was, how few stairs there were (I distinctly remembered climbing so very many). And then, the basement. I used to run the length of the basement and get winded. That day, it took me 8 steps and I was at the end. And my head was damn near touching the ceiling. Perception is a bitch. But I also remember how utterly happy I was, even if adult me was all this house is not fit for children.

We live in a condo (4 units only) and we have a ward that is smaller than the conference room at work! It is big enough for a sand box and a small toyhouse, and we live about 1 block away from amazing parks and playground. My kids can play outside by themselves, and when they get bigger, or we want bigger stuctures/toys, than to the playground we go!

Thanks for this! We are actually moving back to the DC area soon after 3 years away...in a single family house...with a backyard that houses a swing set and a deck and patio and garden and is big enough for all kinds of water toys. One of the problems I keep having looking at the townhouses we can afford is that none of them seem to have a large enough yard for all of the kids we have now. Perspective: now I can has it.