Today is my 15th wedding anniversary. Fiiiifteeeenth. Just think: only one more year until my marriage is old enough to drive. 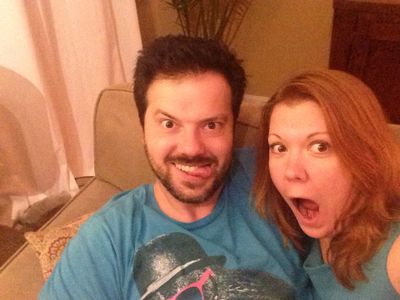 I still wouldn't let it babysit your kids or liquor cabinet or anything. The maturity level just isn't quite there yet.

I was planning to write some longwinded sentimental thing today, and talk about him and me and us and how awesome it all is to be married to your best friend and also the best person you've ever met, period, and how it doesn't feel like 15 years. Maybe more like five, even though our oldest child is almost eight and we were already married seven years before he came along so that math doesn't make a lick of sense. Plus I wouldn't even want to go back to only being married for five years because 15 is more fun, more honest, more comfortable and yet also more adventurous, and definitely more "okay yeah, everything that is good is even better because YOU" rock solid. Also: Archer and Game of Thrones weren't even on way back then, which would suck. 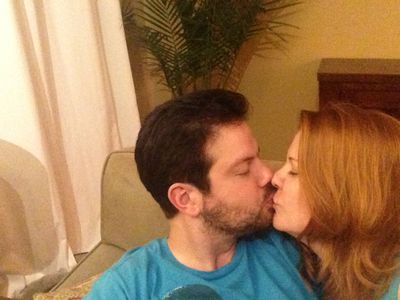 You two are about the cutest, most hilarious couple ever. Congratulations on finding your forever +1 who makes you laugh.

Congratulations, but man, that last photo looks kind of forced and just a tiny bit scary! :-)

Awesome post. Happy anniversary! We are coming up on 12 years plus 5 of dating...so yeah. I get the comfy feeling but still adding in a little of the unexpected - juuussst to keep it interesting!

God bless, you guys. We need more of us happily married types out there.

Congratulations, so happy for you guys! It does seem like it just gets more fun when you are with the right person. Hope you do something delicious to celebrate. :)

Wow- Noah looks so much like your husband in that first pic. Also you are too cute and youthful to be married for so long- grade school lovers I guess?? Congratulations!!!

We are celebrating our 5th soon, but I think you guys look like a couple of newlyweds! Congrats on 15 wonderful years. And how do you guys look so YOUNG????

Dammit, I thought there'd be tongue.

What's the key to a long, happy marriage? See photos A and B!

I feel weird commenting about someone elses husband, buuut, your husband looks so good with a beard I may try and convince mine to grow one! Enjoy your day!

Aw, so cute you two are! Happy and congrats and all that.

Congratulations! Wishing you many, many more years of happiness!

how the hell did your parents let you get married at 15??? Congrats!

K so I'm super weird and somehow found your blog years ago and have followed it ever since and I have a few mildly creepy things to say:
1. Congratulations on your wonderful relationship! And anniversary! I hope to have a relationship like yours in my life.
2. Spectrum disorders run in my family (specifically Aspergers, but other family members are probably undiagnosed) and I'm super scared about maybe having kids someday on the spectrum. Your honest but funny posts are a boon to my anxiety.
3. Your blog makes me laugh out loud So. Often.
In conclusion, I promise I am not a stalker, and thank you for being you.

Today is my 10th anniversary! Happy Anniversary to all of us! Yay August 8th! Soooo many exclamation points!!!

Well now, that is one of the nicest posts I've ever read about long term marriage. Congrats on being so-still-in-love 15 years on. It is a credit to the both of you, and the people you are!

May you have many more 15 years to celebrate together, and the joy to accompany them all.
xx

You two are so adorable! Congratulations on your driver's permit eligible aged marriage. Happy anniversary!

I discovered your blog early this year and have never commented. I think your family is so awesome! And August 8th is also my birthday :) It's a good day!